Everywhere you look at the moment Queensland politicians are donning a hard hat and a Hi-vis vest to announce some infrastructure project in an attempt to win votes via the promise of jobs. But like the haute couture of a Paris fashion runway, hard hats and Hi-vis don’t suit everyone, and, I am not talking about the fashion choices of politicians.

If there has been one omnipresent word in the Queensland election campaign, it has been jobs. The vernacular has revolved around ‘clawing back jobs’, ‘creating jobs for Queenslanders’, or ‘jobs, jobs, jobs’.

Currently around 190,000 Queenslanders are unemployed, representing the highest jobless rate in Australia at 7.7 percent. When underemployment is considered this ticks up to 10.7 per cent.

While we should be careful of monthly jobs figures, the Australian Bureau of Statistics’ September job numbers are grim when compared to twelve months ago. 62,000 full time jobs have disappeared and although off-set by a rise in part-time employment, it still left 31,000 jobs missing in action.

Over the same period unemployment queues swelled by 36,000 and the number of people participating in the labour market fell, as did the number of employed people as a ratio of total population.

The picture becomes more demoralising when figures from an Anglicare 2020 jobs availability report are considered. The report shows that in Queensland there were 7.3 disadvantaged job seekers for every entry level job advertised. The comparative Australia wide ratio was 7.8.  When all job seekers were included, the ratio Australia wide shot up to 106 jobseekers to every advertised job, so we can assume an equally high ratio for Queensland. 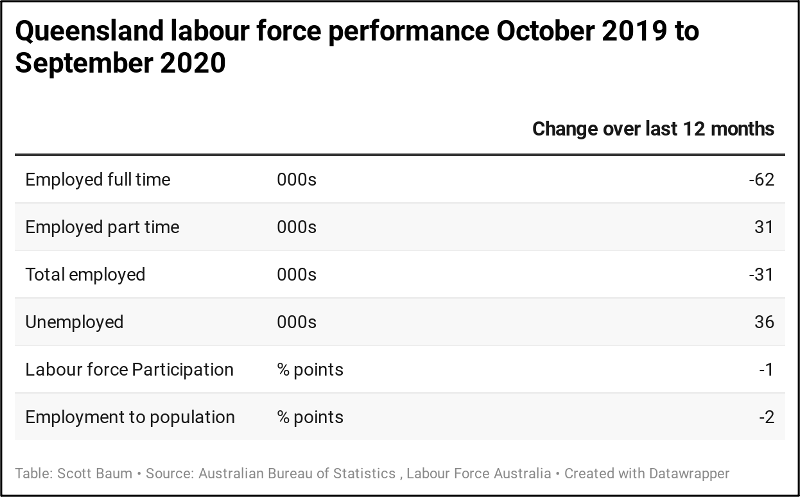 No amount of hard hat and Hi-vis job announcements are going to fix this. Regardless of the promises from all sides the jobs created will not be enough. Sure, infrastructure is an important industry, but our politicians’ obsession with big projects as a job fix is as superficial as a bunch of teenagers  at an Instagram party.

For one thing, the majority of jobs in the construction industry are held by males. So most new jobs created will come with a distinct gender bias, all thanks to gender segregation of the workforce that sees 6 in 10 employees working in an industry dominated by one sex.

In Queensland (and Australia-wide for that matter), males are far-and-away over-represented in the construction industry, the very same industry that politicians are spruiking as they smile for the media while wearing their hard hats and Hi-vis.

Overall, women represent 48 per cent of the employed workforce, but just 13 per cent of employment in the construction industry. I understand that shovel ready job makes a good photo op, especially if it is seen as a mega-project, but why not look for good photo ops and spruik the need for job building projects in other sectors that might have more chance of evenly spreading the job capture across all Queenslanders, regardless of gender? 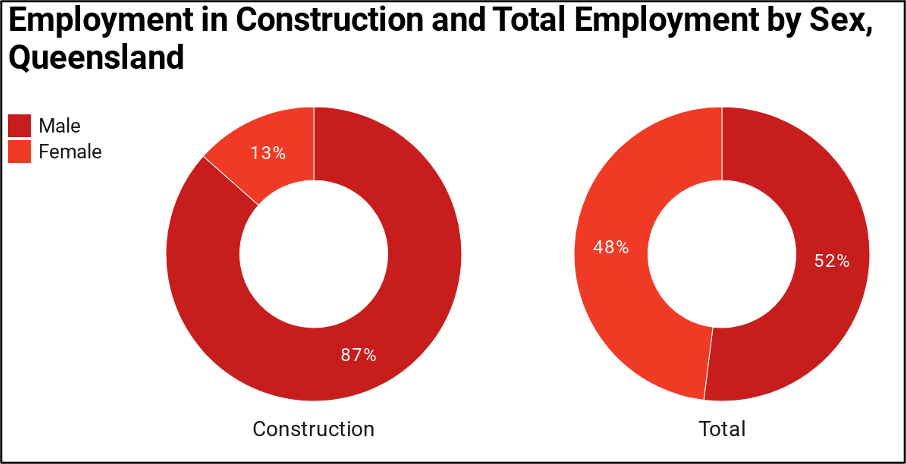 And then there is an issue of skills mismatch. It is fairly clear that the type of formal skills held by the majority of people in construction and those who are unemployed are different.

Sure, there is some overlap, but there is also a significant mismatch. Far-and-away the most prominent qualification held by workers in the constructions sector is a post-secondary certificate level three or four.

This compares to those who are unemployed who are more likely to hold a secondary school education (49 per cent). Only 21 percent of unemployed people hold a post-secondary certificate. The most disadvantaged job seekers are often the ones with less opportunities precisely because they have lower levels of education.

So, once again, the hard hat and Hi-vis job announcements are not going to suit everyone, especially those most in need. Building skills should be a big part of any job strategy (the promised policy of free TAFE courses for under 25s announced by the ALP is a step in the right direction), but any hint of this seems lost in the race to announce the latest big shiny infrastructure project.

Finally, the seemingly endless focus on infrastructure jobs ignores the possibility that spending on jobs in in other sectors will potentially have larger employment impacts.  When politicians announce some big infrastructure project they inevitably announce a job figure. 400 jobs here, 1000 jobs there.

Politicians are never too big on detail so there is no telling if these are just jobs directly associated with the project or as a result of the broader job creation (economists call these employment multipliers). Now calculating employment multipliers can sometimes be a bit ‘iffy’, dependent as they are on a range of different assumptions.

Even so, by pulling together some information from a bunch of sources suggests that the direct employment effects of $1 million spent in construction may well be less than the effect of the same spending in other industries like healthcare, education or childcare, all employment intensive industries. If  ‘jobs, jobs, jobs’ are an important election issue, why isn’t there equal focus on some of these other industries?

The take-home message has to be that our politicians need to stop their obsession with hard hat and Hi-vis haute couture and stat spreading their jobs message across other in industry sectors.

The big danger, as Richard Denniss has recently commented, is that the focus on infrastructure results in a herd of white elephants – big on promises but low on delivery.

So let’s hope, for all of Queensland’s sake that we don’t end up with a bunch of white elephants dressed in haute couture.

Professor Scott Baum is an expert in the economics and social outcomes of change at the Griffith University School of Environment and Science.