Behaviour of the security guards, including allegations of sexual encounters with those quarantined, as well as lax security standards and poor organisation, have been blamed as a major cause of Victoria’s current coronavirus outbreak.

Premier Daniel Andrews today announced another 484 positive tests for the past 24 hours – a record for the pandemic in Australia. The majority of infections on the outbreak have been traced back to quarantine hotels.

Queensland Premier Annastacia Palaszczuk said officials were carefully monitoring the situation in Victoria and also NSW, where another 16 cases were recorded overnight. Having effectively banned travel from Victoria, Palaszczuk said new restrictions may be placed on NSW hotspots, even if NSW Premier Gladys Berejiklian was unwilling to help ease tensions at the Gold Coast border.

Shayla Shakshi was one of the guards who received a WhatsApp message offering her work as a quarantine security guard in a Melbourne hotel.

“They actually contacted me and they’re like, ‘Would you like to work at this place?” she told 7.30.

“And I’m like, I don’t know what you guys are, what company, nothing.

“I just got told that you need to be here at a certain time and you’re going to dress in a certain way and this is your pay rate. That’s it.” 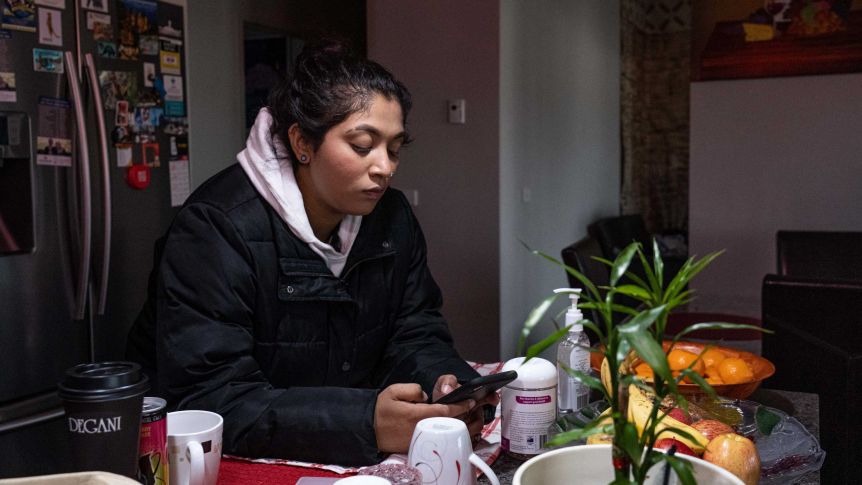 Shayla Shakshi was appalled at what she saw when she worked as a security guard at a quarantine hotel. (Photo: ABC News: Tom Joyner)

7.30 has obtained a series of WhatsApp messages which reveal how some security guards were recruited to work in these Melbourne quarantine hotels.

On May 30, three days after the first hotel coronavirus outbreak at Rydges on Swanston, there was a call out for “40 guards” to do quarantine work at the hotel.

One person in the group expressed concern about “six corona positive guards in [the] Carlton hotel… so please be careful”.

That concern received no response. 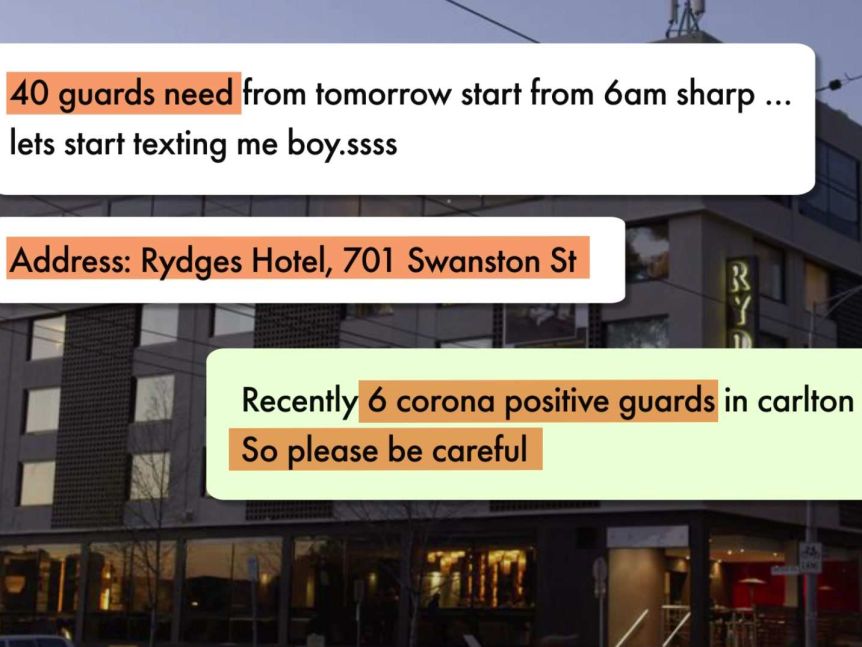 The WhatsApp message advising that six security guards had tested positive to COVID-19.

Unified Security was the company responsible for quarantine security at Rydges on Swanston.

The company told 7.30 it entered into a relationship with five subcontractors and all were “properly screened to ensure compliance with ACN [Australian Company Number] , insurance and security licence requirements”.

Rydges on Swanston told 7.30 it had been operating under the direction of Victoria’s Department of Jobs, Precincts and Regions (DJPR) and Department of Health and Human Services (DHHS).

“Rydges on Swanston has had no involvement in the hiring of security personnel and is fully supportive of the Judicial Inquiry into the Hotel Quarantine Program,” a spokesperson said in a statement.

On June 18, two days after a worker at the Stamford Plaza tested positive, there was a request for 10 guards to work at that hotel.

When someone in the group asked about the rate of pay, the organiser responded, “25 dollars, ABN” — signifying the guards weren’t expected to be directly employed by the company, but act as independent contractors and supply an Australian Business Number.

Bryan Goudsblom is the CEO of a Melbourne-based security company.

He refuses to use subcontractors and believes it will make it difficult for the judicial inquiry now underway to determine which firms provided security services.

“Who are the subcontractors? How many were there? And then, how many people did they supply?

“I would suggest if you’re looking at the WhatsApp sort of system, if that’s their proof of delivery, then there is going to be a lot of questions asked.

“I’m not surprised that the hotel quarantine situation’s occurred given that a number of these situations and practices have occurred for many, many years.”

When approached by 7.30, MSS Security, the company contracted to run security at the Stamford Plaza, refused to comment, citing its contract obligations with the Victorian Government.

Shakshi also claimed there were no infection-control protocols at the Stamford Plaza when she worked there in May.

“We didn’t get any training when I got there,” she said.

“They just didn’t tell us what training we had to do, we just had to put a mask on, put gloves on, and that’s it.

“They had no training of how to use PPE (personal protective equipment), how to sanitise hands, nothing. No training at all.

“Then some levels didn’t have sanitisers, so it was really tricky.

“You just didn’t want to touch anything.”

At the end of her first day on the job, Shakshi said her supervisors told her to bring her own personal protective equipment to wear the next day.

Within weeks of Shakshi cancelling the rest of her shifts, an outbreak linked to security guards at the hotel was confirmed.

“I just knew something would happen,” Shakshi said.

“They weren’t actually serious about how serious this COVID is.

“They were taking it as a joke, like, oh, it’s just some virus that anyone can get. You know, we’re not going to get it.”

And she is just glad she didn’t stay.

“It was just really scary working there because they didn’t care,” she said.

“It was really horrible.”