It is not the stereotypical back page picture of a player rising over a pack to take a soaring mark or an iconic act such as Nicky Winmar’s defiant “black and proud” gesture.

The photograph was not even taken by a professional photographer but shared on Instagram by a family that is both intensely proud and under great emotional stress.

The image that will symbolise this strange disrupted season is that of Geelong champion Gary Ablett Jr holding his son in his arms at the airport at the weekend after his premature return from the team’s Perth hub.

It is a heart-warming photo although, sadly, it is the backstory that lifts it from the pages of the Ablett family album to the centre of our current sporting consciousness.

Eighteen month-old Levi Ablett suffers a rare degenerative disease, while his mother, Jordan, is caring for her own mother who has cancer. This prompted the 36-year-old Geelong star to leave quarantine in Perth and travel home to his family.

Under such circumstances, the Abletts did what most parents would do. But his decision was made at a time when we are expecting — even demanding — that athletes do much more than we would normally consider reasonable.

In Victoria, particularly, the latest lockdown caused by the second wave of COVID-19 and now highlighted by the sensible imposition of the mandatory wearing of masks in public has put yet more emphasis on sport as a vital distraction.

The enormous recent viewing figures for AFL games demonstrate how sport is providing comfort; and also that no-one wants to go through another lockdown without our regular fix of live games as we did the first time.

Consequently, athletes have taken — or been lumped with — the status of essential workers. Like Bob Hope entertaining the US troops in Korea, they are our distraction, our joy, our relief. Although for those sent to hubs, their personal tours of duty are much longer than Hope’s fly-in fly-out performances.

As you will be quickly reminded upon lauding (now somewhat less) well-paid athletes for leaving home to play sport, the sacrifices of most sports stars are relatively insignificant compared with the troubles of those who have lost livelihoods or even loved ones during the pandemic.

This is why the photo of Gary Ablett hugging Levi to his chest is both powerful and significant. It is a timely reminder that our circumstances, even those of the greatest and wealthiest athletes, are all different even as our priorities remain much the same. 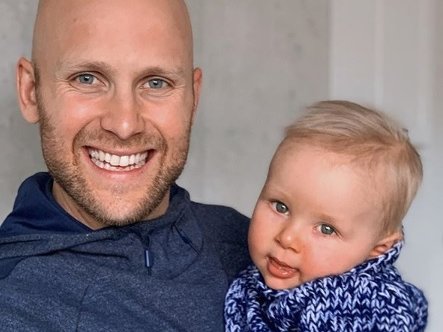 The importance of providing context about the decisions of athletes who might need to abandon their teams temporarily has changed the media reporting dynamic somewhat.

In some situations, a footy star or a golf champion’s off-field life, even his or her persona and life choices, are no longer merely the substance of gossip-page tittle-tattle or even more nuanced sports page profiles intended to provide perspective of “the real person”.

Factors leading to a player’s withdrawal from a game — and now a hub — that might normally be covered by the catch-all phrase “personal reasons” are being revealed in detail, even publicised, to ensure the appropriate understanding is extended to a player who has had to make that decision.

We would not normally have needed to know that Richmond’s star Bachar Houli’s mother Yemama had contracted COVID-19 if it was another condition at another time. But the story Houli generously shared gave context to his decision not to join his teammates in Queensland.

But while the revelation of circumstances such as family illnesses temper our rush to judgment on athletes unable to compete, the behavioural aspect of some athletes is being judged even more harshly.

At another time Novak Djokovic’s unorthodox views on vaccination might have been merely a matter of personal opinion, assuming he did not use his status to dissuade others from taking the appropriate precautions.

In a pandemic, Djokovic’s ignorance informed the decision to run a tennis tournament that left several star players and others infected by, or exposed to, COVID-19 at a time when his game was desperately trying to revive major events and restore incomes.

At the other end of the spectrum, an occasionally hysterical atmosphere has inflamed our view of athletes who commit what might once have been considered minor infractions — or no infraction at all.

This was symbolised by the case of Essendon’s Conor McKenna, who was vilified for returning what proved to be a false positive test that caused an AFL game to be postponed. Inevitably a relatively minor breach of quarantine brought down the weight of the football world upon the Irishman.

At this extreme, COVID-19 sport has only accentuated the modern trend to dehumanise and vilify athletes in professional sports where the barriers between the players and the media are often heavily fortified and the capacity for mutual empathy diminished.

Then there is a picture of Gary Ablett at the airport clutching his son in a loving embrace; an image that is both incredibly moving and universally relatable.

A powerful reminder that this season, more than any other, footballers are just people doing their best to look after their families while being held responsible for providing our entertainment and also ensuring the ongoing prosperity of their sports.