Mitchell, who accepted the $50,000 Prize via Skype from her home in locked-down Melbourne, said she was honoured to be the first female and first digital recipient of the Lord Mayor’s Prize.

“To be selected among such an impressive range of portraiture is something my younger self would have never believed possible,” she said.

“Due to Covid restrictions I was unable to photograph my original sitter for my entry this year in Brisbane, which forced me to brave the 11.2 degree Melbourne waters and look within myself to tell a different kind of story to what I’m comfortable with.”

Mitchell, an underwater fine photographer, said the portrait was captured amidst the isolation of lockdown, rendering the human condition during the pandemic.

“Unable to travel back to Brisbane, the ever evolving knowledge of a growing divide among people politically, socially and environmentally bears down on my mind, increasing the need to create something meaningful and purposeful,” said Mitchell.

“Untouched and uninterested in beauty, I realise that seeing myself objectively as a muse at such a mentally turbulent time for so many, produces beyond a portrait, perhaps a capturing of distilled grit and courage against the beauty and cruelty of a blank horizon.”

“The bluey translucent backdrop of a moody sky and sea contrasts perfectly against the heavy Kabuki style makeup upon the floating face. Together these simple elements reinforce a powerful nature that challenges our vulnerability. The chemistry of the water and the body is symbolic of our shared fragility and strength.

“Beth Mitchell’s conversation about nature and the human condition is engaging and this self-portrait wins the Lord Mayor’s Prize, a brooding self, a gothic beauty, ethereal qualities, almost not of this world, but somewhere else.” 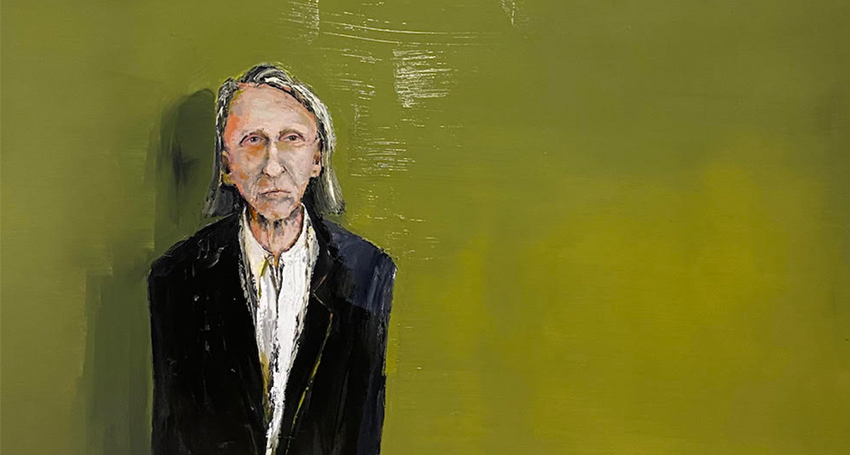 Brisbane photographer Russell Shakespeare’s portrait The Artist Judy Watson won the $10,000 Accenture Prize for Digital Portraiture, while the $5,000 2021 Sylvia Jones Prize for Women Artists was awarded to Tish Lineham for Path of Focus: Portrait of Cate and Bronte Campbell.

The $7,500 Performing Arts and Music Award was presented to Amanda Penrose Hart for Reg, her portrait of Mental As Anything’s Reg Mombassa.

Brisbane Portrait Prize Director Anna Reynolds said the competition continued to grow in renown, with the 2021 winners chosen from 71 finalists from a field of more than 550 entries.

“I think this is the best exhibition yet. It has it all. It is both a representation of the times and the people who have carried us through, and a reflection on the inner worlds many have had trouble navigating,” said Reynolds.

A Path of Focus: Portrait of Cate and Bronte Campbell. Winner of the Sylvia Jones Prize for Women Artists (Image: Brisbane Portrait Prize)

“There are Olympic heroes, family heroes, there are people and their pets. There are depictions of both our beautiful city, and our more private, indoor spaces. Some relate to the difficulties of COVID and the year we have just had, and some others represent stories of heroism, joy, and hope.”

In support of emerging artists, the $2,000 Next Gen Prize was awarded to Grace Naveikata for her self-portrait The Climber which depicts her journey of spiritual and cultural growth as a young Fijian woman.

Among the other prize winners were Birrunga Wiradyuri for his work Burundhang Gunhungurran (Night Rainbow) which was awarded the $5,000 Packer’s Prize, and the Emerging Artists Prize which awarded $1,000 to Hanna Brown for her self-portrait Home and Martina Clark for Gratitude and a Dream.

The 75 shortlisted portraits will be exhibited in Brisbane Powerhouse until 31 October.