The popular music and culture festival is traditionally held over six days and six nights over new year, and has programmed huge talent such as 2019’s headliner Kasey Chambers and acts such as The Cat Empire and Xavier Rudd, with crowds up to 130,000 people.

Event organisers Bill Hauritz and Amanda Jackes said the recent Delta outbreaks have caused too much uncertainty and have resulted in the cancellation.

“It has been hard to finalise plans for the end of the year with the live event landscape around the pandemic changing so much,” they said in a statement.

“We have been studying Australia’s progress closely and hoped to put together a 25 per cent scale festival this year, but with the recent lockdowns and spread of the delta strain, even that plan represented too much of a risk for Woodfordia.”

In its place they are holding a Bushtime event across the same dates as Woodford Folk Festival, a scaled-back, slower version of the Festival which kicked off last year. 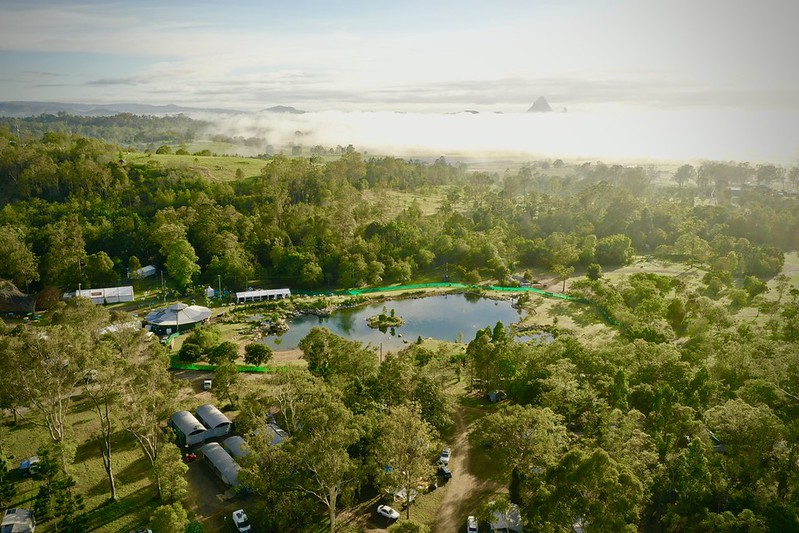 Amanda Jackes, Woodfordia’s General Manager, said the six-day camping event is held on a 500-acre parkland located in the Moreton Bay hinterland and encourages people to reconnect with nature.

“While we behind the scenes are dearly missing putting together the Woodford Folk Festival, the financial implications for medium and large-scale events impacted by lockdowns are far too dire.

“We know that many of our community – our patrons as well as the artistic community – are still looking to connect here on the land. While we are pretty heartbroken to not be holding Woodford Folk Festival for another year, we are encouraged to put our creative energies into Bushtime.

“The programme for Bushtime will still embrace a slower pace in the morning, to encourage patrons ‘getting back to nature’, with the option of workshops, yoga and youth activities.

“But, the pace will then pick up in the afternoon with a busier and more diverse programme than previous Bushtimes, expanding to include those elements that we are all missing from Woodford Folk Festival: comedy, cabaret, ceremonies, talks, dance (hopefully) and of course, an excellent series of concerts.

The Festival for the first time will also offer a camping experience around Lake Gkula during the school holidays, 18 September to 4 October.

“Our Lake Gkula Camping is a trial, to see if there’s interest and if the idea of a beautiful campsite, great walks and a swim in our beautiful Lake Gkula might be attractive to those wanting to get away from it all,” said the organisers.