Lyrical Landscapes: The Art of William Robinson, is the second major exhibition at Home of the Arts (HOTA) Gallery on the Gold Coast. The gallery, that opened in May, will host the Robinson exhibition from 31 July to 3 October.

Under Bryce’s guidance it will include Robinson’s entire Creation Series, produced over 16 years and presented together for the first time.

Bryce is also releasing a Spotify playlist to accompany the exhibition.

“It’s a real wow. Awesome the kids would call it,” Bryce said.

However, before anyone suspects her of turning funky DJ, Bryce said the exhibition and playlist aims to explore Robinson’s deep connection to classical music and the musical elements of scale, grandeur, light and shade in his work. 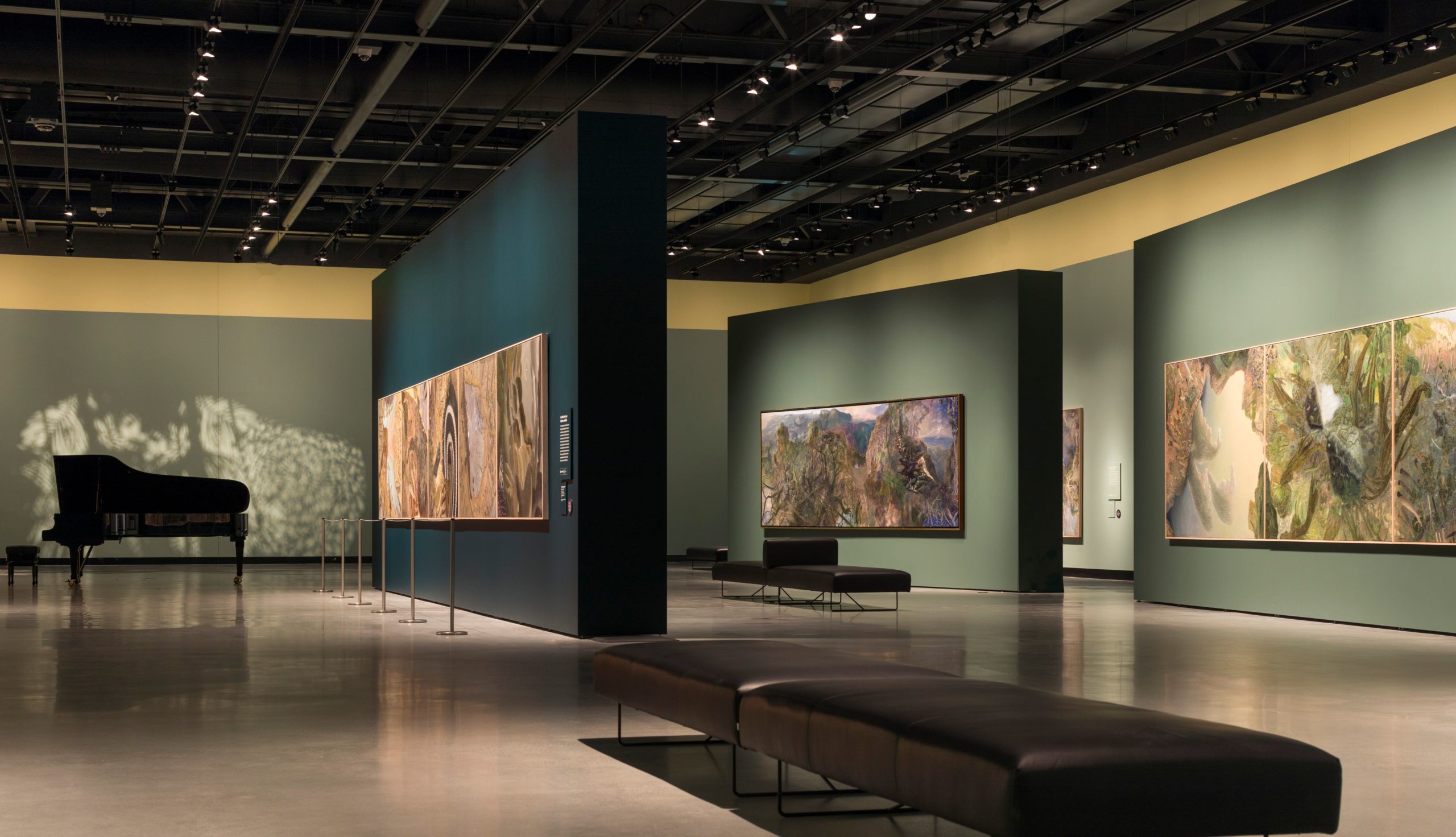 Bryce said the exhibition aimed to bring all the senses alive and allow audiences to be swallowed up by the experience.

“I love art. I’m mad about William Robinson’s landscapes in particular, but his whole oeuvre of course. This brings together so many things that are uplifting and inspiring for all of us, art and beauty, the natural world, the glorious hinterland and our rainforest,” she said.

She said it was a huge privilege to curate the exhibition, which was “the perfect way” to celebrate Robinson’s 85th birthday.

“It’s allowed us to bring together Bill’s greatest paintings, to my mind the paintings that he did at the height of his powers.

“It’s the first time the Creation Series have been brought together, that there’s been a space that can showcase them superbly,” she said.

“I’m exhilarated by the exhibition design…I know that everybody who walks into this exhibition is going to be knocked out by it.”

Bryce said her association, indeed friendship, with Bill and his wife Shirley spans decades and was founded in their mutual love of art, classical music and passion for nature.

“Early in my term as Governor-General, I borrowed one of his most loved and admired rainforest paintings, Springbrook with lifting Fog, from the National Gallery of Australia for the wall of my study at Yarralumla,” she said.

“Every day it brought to my life sublime beauty, intellectual and spiritual questioning and understanding of the joyousness of nature.

“Across the years since, I have rejoiced in having some of Bill’s beautiful work in my life, at home and in my QUT Office. It has taught me so much about landscape in art and in life, about how much a work of great beauty demands and how much pleasure, happiness, contentment, and wonder it gives.”

HOTA CEO Criena Gehrke said the exhibition was for a major coup for HOTA, with the design of the gallery itself inspired by Robinson’s painting, The Rainforest.

“As the second major exhibition at HOTA Gallery Lyrical Landscapes: The Art of William Robinson is a love letter to the Gold Coast, as much as it is a celebration of one of the greatest living landscape artists in Australia,” Gehrke said.