Hot Valley Nights director Michael Condon knows the Valley is a place ripe for satire and as an old local, his new comedy show is here to poke fun at Fortitude Valley – all derived from a place of love.

Compared to comedies such as Brooklyn Nine Nine, Broad City, and Utopia, Hot Valley Nights follows the story of John Burroughs, who gets fired from his swanky marketing job for flipping off his bosses and finds himself under the wing of American Psycho-style entrepreneur Danny Young in his ‘co-working omni-loft’ the CRE-8 Space.

Creator and director Condon said he was surprised Fortitude Valley hadn’t been the subject of a comedy series before, as it’s in a perfect state of mid-gentrification neuroses that comedy thrives in.

“The Valley is perfect for comedy,” said Condon. “I used to live and work in the Valley and it has these universal qualities that gentrified little pockets all around the world have,” said Condon.

“We wanted the show to be universal but by the same token the Valley is unique. Trying to explain it to people who are not from here is quite hard.

“It’s an intersection of all these different people. People who are down and out through to corporate types, creative entrepreneurs, developers, real estate people, it’s a mishmash of all sorts.

“It’s grimy and dirty but it’s got this hipster vibe going on where everyone’s pretending they’re killing it. Everybody you run into is somehow killing it.

“People used to come into our work and leave their luxury car keys on the desk and you’d find out later that they were buying those cars on finance.” 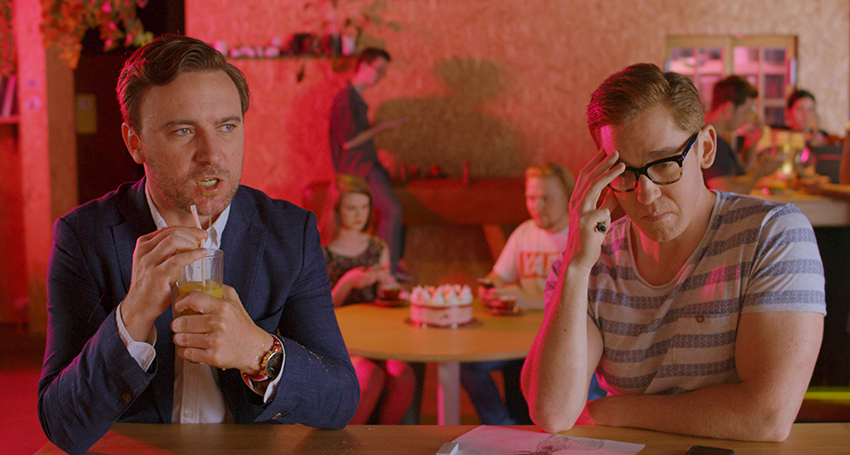 Condon, a Peabody Award-winning former broadcast journalist, along with his brother, producer Damien Condon, developed the concept with American comedy writer Brad Einstein, who has written for shows such as Billy on the Street.

The show can currently be viewed on YouTube, having been released just under one month ago on the platform, it has already amassed 165,000 views.

“It took us four years to get rejected by Stan, it’s really great when those things take ages,” said Condon.

“The idea was to create short form serialised content for social media and it was just about to get green lit and then it got canned. So we thought screw it we’ll just do it ourselves,” said Condon.

“We decided to create a half hour pilot broadcast for streaming services like Netflix. It was a 24 minute TV pilot and we pitched it to places like Stan who eventually said no.

“Now we’ve repackaged it as a web series and released it that way.”

In the digital age, this is a small setback for the show but by no means the end. The creators have plans to build off the organic audience they’ve drummed up from YouTube with a future bridging episode, then onto a second season.

“A big part of the drive for us to make this show is that Brisbane actually doesn’t have much of an industry in terms of TV. You need ongoing TV shows that are made in the city in order to build that industry.

“Luckily, Brisbane has something like Bluey and that’s got a real Brisbane flavour to it.  And – incidentally – Melanie Zanetti who plays Zowie Brooks in Hot Valley Nights is also the mum in Bluey.

“Brisbane is exciting in the way that it’s growing and developing and there’s definitely been a lot of people moving up to Brisbane from down south.

“We can be a bit parochial but I’d hope that in the same fashion they’d love to see a show like Hot Valley Nights made with love but also poking fun at Brisbane.”

As much as the programme is a satire, it is also a real celebration of the creativity coming out of Brisbane. The series’ theme song is ‘Every Kind of Way’ by the Jungle Giants, who incidentally just had a plaque cemented in the Valley.

“That’s a real focus for us we really want to promote local artists which goes back to the point of trying to support a homegrown industry here in Brisbane,” said Condon.

“It adds to the flavour which makes the show recognisable to people from Brisbane.”