Following their enviable success in 2020 where ticket sales increased by 36 per cent, Winton’s festival returns for its eighth year with a lineup of Australian films including My Name is Gulpilil, Penguin Bloom, and The Dry.

The festival is the largest film festival dedicated to Australian cinema, all films are screened under Winton’s night sky at the Winton Royal Open Air Theatre which Chief Executive Mark Melrose said is one of only two of its kind and stands at an historic 103 years old.

“Watching a movie under the stars in one of what is only two operating open air theatres in Australia is quite unique and something you must do to really appreciate it,” Melrose told InQueensland.

The theme this year is ‘Remember’, a nostalgic look back at Australia’s days gone by and as part of the Year of Indigenous Tourism, the festival is also paying homage to the Indigenous people of the land.

Beginning on 25 June, the festival’s opening night begins with My Name is Gulpilil, an intimate portrayal of the life of legendary Indigenous actor David Gulpilil, an icon of the Australian screen.

The festival coincides with the granting of Native Title to the traditional custodians of Winton, the Koa people, and Melrose saw this as a fitting time to work closely with the Indigenous community to curate this year’s festival.

“We worked very closely with the current Aboriginal Corporation, who have just been presented as the traditional custodians of the land for Winton. We’re bringing them into the programme this year and utilising their elders to sit down and share their dreamtime storytelling with us and what the land means to them out there,” Melrose told InQueensland.

Melrose said as well as screening Indigenous films they were also incorporating film tours and a storytelling masterclass that is still in development.

“The idea is to have a tour with somebody who knows information about the films that were shot but also a second tour guide who is Indigenous and can explain the history and nature of the site.

Melrose said it is a way to begin dialogue between the Koa people and film productions before films are shot on location.

“It’s a way to explain what the sacred site means to them but also what they expect with filmmakers coming to see the land and how they appropriately respect the people and land of those who have been before them,” said Melrose. 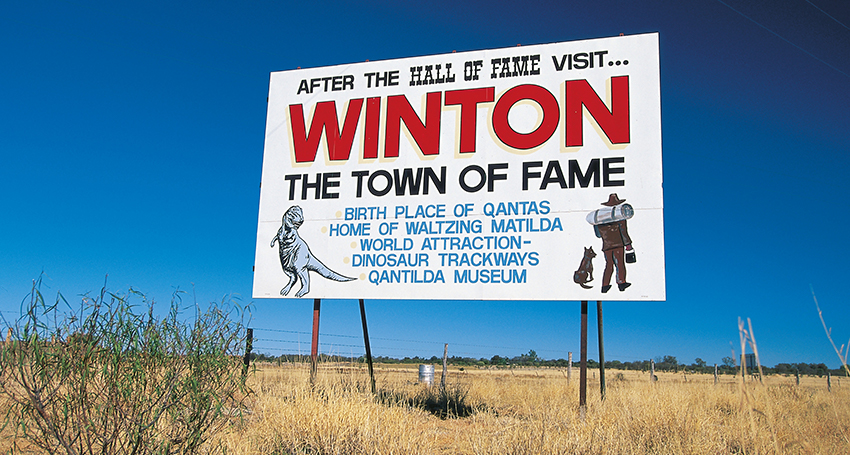 Melrose said the aims of the festival are two-fold, tourism itself is the second biggest economic driver in Winton after agriculture, but the creation of a regional film industry would be a real boon for the community.

“We put on films and invite the creators, so the actors, the directors, producers, screenwriters, and when they’re out there we are able to showcase Winton and the surrounding areas to them,” Melrose told InQueensland.

“Most, if not all of them, have got something in the back of their head. Filmmakers usually love to do Westerns, or something that suits the landscapes, which cannot be replicated in the studio.”

Melrose said that every film that is shot on location near Winton provides a huge boost for the regional economy.

“Just one film alone provides this benefit. The Proposition, when it was shot out there spent around $11 million in the region.

“The experts tell us that circulates anywhere between three to 10 times within the community. $11 million with a multiple of three is a lot of money for regional areas. This drives regional jobs and builds regional towns off the back of that.”

Curator and Creative Director of the festival, Greg Dolgopolov, said this year’s programme shows the growing number of world-class local films and productions in our own backyard.