It was so much more than a painting being hung on a wall.

Ahead of next month’s official opening of the new Home of the Arts (HOTA) Art Gallery on the Gold Coast, curatorial staff this week positioned the first artwork, William Robinson’s The Rainforest, in the immaculate, climate-controlled gallery space.

HOTA CEO Criena Gehrke said the hanging of The Rainforest put it centre stage in the new $60.5 million, six-level gallery that will be Australia’s largest public gallery outside a capital city.

It is a monumental five-metre artwork by one of the nation’s foremost landscape artists and the piece that inspired the shapes and riotous colours of the HOTA gallery exterior.

“The Rainforest has been both the inspiration and the design of the gallery and a metaphor for the curatorial approach,” Gehrke said.  “Evoking the essence of a rainforest, with aspects of light and dark, unexpected viewpoints, and moments of surprise and delight around every corner, it’s a privilege to share the new HOTA Gallery with the Gold Coast community.” 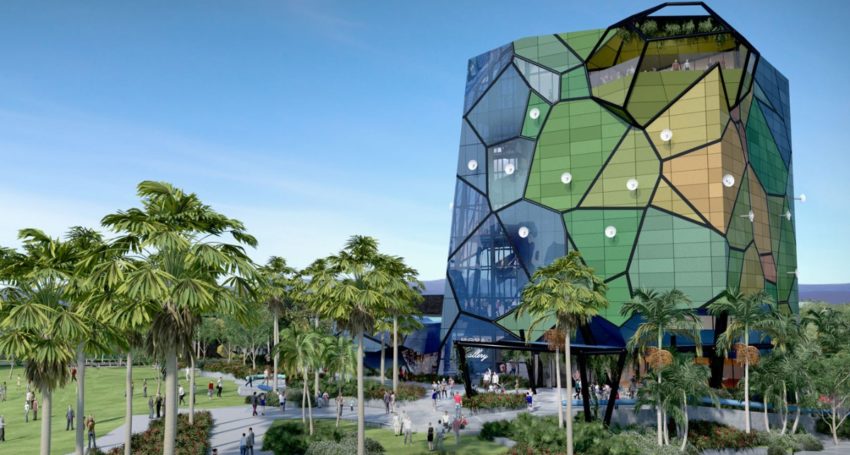 But more than inspiring a building full of comforting crannies and a surprising colour palette, the mysterious and controversial painting embodies the growing pains that have beset the Gold Coast’s search for a cultural soul.

The Rainforest is the Gold Coast’s version of Jackson Pollock’s famous Blue Poles, similar both in size and scandal.

It was Pollock’s abstract Blue Poles that, almost 50 years ago, Prime Minister Gough Whitlam authorised the National Gallery of Australia to buy for $1.3 million, sparking years of debate about the painting’s value and our artistic identity.

Just like Blue Poles’ divisive yet electrifying role in the nation’s cultural evolution, so did the acquisition of The Rainforest focus the laser beam of cultural cringe and snobbery on attempts to define the Gold Coast’s creative character.

It started just after artist William Robinson won the Wynne Prize for landscape in 1990 for his depiction of the Gold Coast’s hinterland rainforest.

Robinson had only moved in 1984 from the eastern outskirts of Brisbane to a Gold Coast hinterland property near Beechmont. His love affair with the lush rainforest and dramatic mountains of his new backyard signalled a breakthrough in Robinson’s career, earning him the prestigious Wynne Prize and establishing him as one of Australia’s leading contemporary landscape painters.

Then director of the Gold Coast Art Gallery, Fran Cummings, decided the award-winning painting of a home-grown landscape by a “local” was a no-brainer addition to the gallery and came up with a bold plan to acquire it.

Valued at $80,000, she asked Council to contribute $30,000, only to come up against Gold Coast Bulletin art critic John Millington who campaigned against the purchase, claiming the gallery was being ripped off and rate-payer money should not be spent on such a painting.
Council decided not to put any money towards the purchase.

Yet Cummings persisted and over the next six months crowd-funded the money, extracting donations from businesses and arts-loving community members. Ultimately, the gallery got its painting, which is now valued around $1 million.

It is to this day one of the gallery’s biggest hits, in a city that still suffers many misses in its quest to become an arts destination rather than a cultural bypass.

The gallery itself has burst onto the Surfers Paradise skyline during the bleakness of the pandemic to become the core of the $399 million precinct designed as the cultural heart for the Gold Coast.

It is turning even its staunchest critics, with growing excitement and expectation in the city ahead of the gallery’s official opening on May 8.

Ever the unapologetic showman, Mayor Tom Tate has been cheerleader in chief lauding the new gallery as a “reflection of the Gold Coast’s personality”.

Tate has even amped up his clarion call to the Gold Coast’s ‘have-a-go spirit’ urging locals to get behind the precinct and the fun, artistic flair it brings to the city.

It has not been without speed bumps, with some presenting themselves in the final countdown to the grand opening event.

The new six-metre high “angry gingerbread man” bronze, concrete and neon sculpture commissioned by HOTA to greet visitors at the gallery’s entry door was unveiled two weeks ago and was met with a hail of public criticism. But not even reaction to the work by Sydney-based Sri-Lankan artist Ramesh Mario Nithiyendran could deflect Tate.

“Art is subjective. I say to you, go up, get up close and personal, have a good look at it. Don’t like it, have another drink, keep doing it until you like it,” Tate said.

“Then by the end of night you go ‘that’s a great piece’.”