After having experienced record-breaking runs in Melbourne, Come from Away began its month-long Brisbane season at QPAC over the weekend.

Producer Rodney Rigby said that while the theatre industry around the world is facing its greatest crisis due to COVID-19, Australia is in an enviable position.

“As the world collectively faces one of the greatest challenges in modern times, Come from Away reminds us that compassion is at the core of our humanity. This is a story about unity, and about acting with kindness regardless of our differences,” he said.

The creators of the Tony and Olivier award-winning musical, Irene Sankoff and David Hein, spoke to InQueensland about having the musical run internationally as they enter their third lockdown at home in Toronto, Canada.

“Every single person on our team in London, Toronto, Broadway, across the US, has this feeling that it actually is possible that we can do this. It feels like hope again and to see the show resonating in a new way is really amazing,” said Hein.

The musical explores the true stories of 6,579 passengers on 38 international flights which were diverted to the town of Gander on the small island of Newfoundland, Canada following the 9/11 attacks.

What followed was a show of community and empathy which saw the residents of Gander, population 10,000, welcome the passengers into their homes and hearts.

Sankoff and Hein told InQueensland the message of the musical feels more poignant than ever.

“At the time, the world felt so divided and people wanted a story about people coming together again. Seeing it resonate in a completely new way is wonderful and people respond to it because it’s a story of communities taking care of one another,” said Hein. 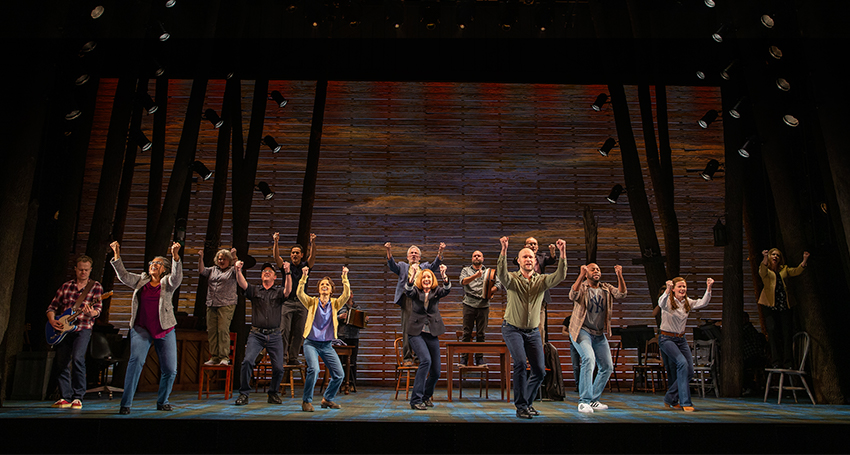 Come from Away at Melbourne’s Comedy Theatre.

Sankoff and Hein went to Gander in 2011 for a ten-year commemoration ceremony and began interviewing the people involved – their stories became the basis of the musical.

“Not only did we talk to every single person we could but every person has two or three amazing stories, and each one was better than the next one – so we used to joke that we came back with 16,000 stories,” they said.

To accommodate the experiences of the people they had spoken to, some characters were made into composites of many stories, and some stories are nodded to in one line.

“The Gander air traffic controllers, with no planes in the sky, had nothing to do for those five days. They ended up making chilli in the air traffic control stations, and would bring it down to the various places where people were housed,” said Hein.

“The truth is not only stranger than fiction but better and more wonderful than you could possibly imagine.”

Sankoff told InQueensland that Come from Away is a celebration of the everyday sacrifices that ordinary people make to allow society to function, which is especially important these days.

“I think we really need to look at our everyday heroes, our grocery shelf stackers and frontline workers. And more generally to focus on stories that are astonishingly good and astonishingly positive,” she said.

“There were stories we had heard that were so sweet that we couldn’t include them, because no one would believe us.”

They said that Come from Away was destined to be a musical because music is part of the fabric of the township of Gander.

“I think we’ve learned that music is in the DNA of everyone out there. Each person plays two or three instruments,” they told InQueensland.

“They have terrible winters out there, which is why Newfoundland is called the rock, it is literally a big rock in the ocean”

“To get through the winter, they bring their instruments over to each other’s places and have kitchen parties, and they sing songs and tell stories to get through it,” they said.

“That is what we wanted to do with the show, to bring that feeling of sharing music and stories and community to the stage and welcome everyone into a kitchen party.”

Come from Away began at QPAC on the weekend and will run for a strictly limited season. For more information and tickets, visit QPAC’s website.