Produced by the La Boite Theatre, Oliver brings his semi-autobiographical comedy cabaret for a three-week run at the Roundhouse Theatre in Kelvin Grove beginning on March 8.

Oliver told InQueensland he began writing his own music just a few years ago and is now performing his original score in Bigger & Blacker.

“Writing the show has been a real journey. It has let me see the threads of music which have influenced me over the years,” said Oliver.

He said the songs he had written for the show over a number of years were beginning to parallel his life.

“I had written some of these songs for characters, not about me. When I revisited them, I realised that it had ended up happening to me.”

“Now I’m going to write songs about men falling in love with me left, right and centre,” he said.

Oliver is accompanied on piano by Michael Griffiths, Musical Director and Helpmann-Award winner, who said the show was performed in its earliest iteration at the Adelaide Cabaret Festival in 2019.

“Originally it was only Steven and I testing the waters and taking a leap of faith, but now we’re performing at La Boite with a talented team,” Griffiths said.

“Through music, Steven tells stories of his lived experiences and together we share terrific songs – nothing is pre-recorded or artificial. Audiences can expect to have a good laugh, be impressed by the music and come away feeling like they’ve opened a window into another life.”

Oliver is a descendant of the Kukuyalanji, Waanyi, Gangalidda, Woppaburra, Bundjalung and Biripi peoples, and has been performing for most of his life.

“I’ve just always been a performer, since I was five years old performing at family barbecues. My dad would always get me up to dance in front of family and that performance side of me is an integral part of my identity,” Oliver told InQueensland.

“I think with human beings, we have the fundamentals, we are meant to eat, breathe and drink but I think the other kind of fundamentals are singing, dancing, and telling story,” he said.

“That’s something inherent in all of us.” 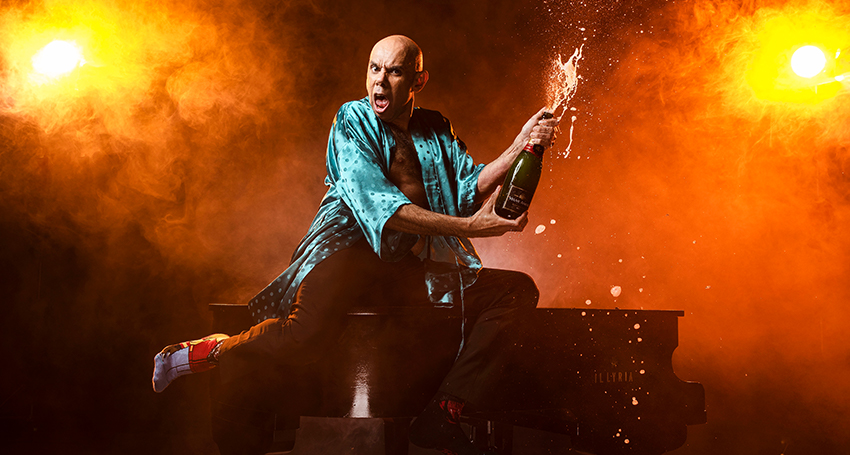 Oliver said his relationship with music is deeply tied to his culture as an Indigenous person.

“Aboriginal people talk about being sung into existence. We call them song lines, where we would sing the land and if you wanted someone to fall in love with you, you could sing them into being because music punctuates our lives,” he said.

“We’ve forgotten how important music is to us because we have turned it into a commodity.

“It’s not just something that we can go out and shake our arse to, and don’t get me wrong I love shaking my arse.

“You know, it’s funny how we always have a song at someone’s funeral but we don’t have a song to welcome people into the world. Aboriginal people have that with naming ceremonies so it’s something innate within us,” Oliver said.

“We end up running so quickly to get to the end of our lives, and we get there and ask where is the big reward? Well, life was the reward. You missed it.

“We should be dancing through our lives, not running through it, and that is what this show is about.” he said.

“Bigger & Blacker is the perfect show for audiences wishing to escape reality for an hour or two,” Ms Spatz said.

“It’s a full-circle moment to work with Oliver in this capacity, after bringing his play, From Darkness, to the stage in 2019, and now presenting his comedy cabaret. We’re beyond excited to work with him again, alongside a passionate and dedicated creative team.”