Coggan is an acclaimed musician in his own right – he won the Toyota Star Maker Quest in 1996 and has since picked up a couple of Golden Guitars and an ARIA Award – and his vocal timbre began drawing comparisons to Stevens’ before he had started publicly playing renditions of the musician’s catalogue.

Coggan’s latest show Remember the Days of Cat Stevens – which coincides with the 50th anniversary of one of Stevens’ landmark albums, Teaser and the Firecat – expands on the setlist he had assembled for Peace Train and it hits QPAC on February 27.

Despite the uncanny vocal similarities he shares with the iconic folk-pop singer-songwriter now known as Yusef, whose catalogue includes enduring hits such as ‘Father and Son’, ‘Where Do the Children Play?’, ‘Wild World’ and ‘Morning Has Broken’, Coggan understands how pejoratively the words “tribute show” can be interpreted.

“I don’t come out and pretend to be Cat Stevens, so it’s not a tribute show in that sense,” he told InQueensland.

“Ultimately, we are celebrating the music and the incredible life journey of Cat Stevens, a remarkable singer-songwriter who was always sort of searching for ways to make the world a better place.

“Ironically, in the world that we live in today, I think a lot of the messages in his music couldn’t be more relevant now, even though some of these songs were written 50 years ago.

“I come out as myself – as Darren Coggan – and we celebrate this great legacy of his music that he gave us as Cat Stevens but at the same time I sort of discuss my relationship with him.” 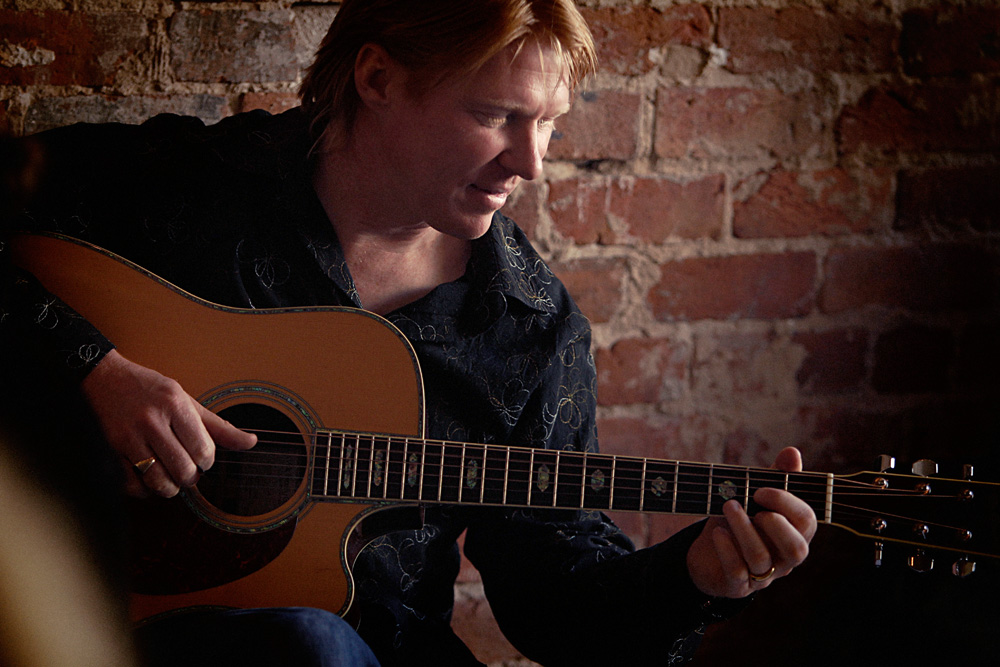 When Coggan makes mention of his “relationship” with Stevens, he’s not just talking about some ambiguous ethereal connection with the songs written by the man who started his life as Steven Georgiou.

Coggan was midway through a six-week season of an early version of his Peace Train show at Melbourne’s Athenaeum Theatre in 2007 when a post-gig encounter with an audience member ultimately led to an introduction to Stevens himself.

“We’ve got a little live album of the show that we sell and after one of the performances, I was standing in the foyer at the merch stand and a gentleman – who actually looked at a lot like Cat Stevens – came up to me to introduce himself and said, ‘Hi, Darren, my name is Steven Giorgio’.

“I was sort of thinking, OK, here’s a guy who actually thinks he is Cat Stevens, and I was probably a bit dismissive at first but anyway, I was completely wrong.

“He was exactly who he said he was and he said, ‘look, I know this might be a little hard for you to comprehend but I’m actually Cat Stevens’ nephew. I live here in Melbourne and I heard about you and your show so I bought a ticket and I just wanted to congratulate you on a remarkable interpretation of my uncle’s work.’

Coggan said the younger Steven Giorgio told him that if he closed his eyes, he would have sworn he was listening to his uncle play.

“He was very complimentary about the show and my performance and then just casually at the end of the conversation he said, ‘look, I’m going to go home right now and give him a call and I’ll tell him all about you’.”

“We had a bit of back and forth and [Gordon and Stevens] were checking out clips of me on YouTube and we were getting some great reviews for the early version of the show and it all it all eventuated in an invitation. David said, ‘look, I’m not sure if you’re in a position to come to London or not but Yusuf would love to meet with you, we’re very impressed with what you’re doing’.”

It was an offer he couldn’t refuse, and after borrowing some money from his parents and booked a ticket to London, where he spent two days meeting with Gordon and Yusuf.

“It was surreal, [Yusuf] was running a school at St John’s Wood in northern London and we met there and he showed me around this high school that he founded with his wife and he took me to lunch and I just sat there in awe, as he told me stories about touring with Jimi Hendrix and the loves of his life.”

The artist formerly known as Cat Stevens walked away from his career at the height of his popularity and converted to Islam, adopting the name Yusuf Islam, but Coggan said the singer “remains incredibly proud of his work as Cat Stevens and kind of talks about him as like another person, almost a character that he played for a while”.

“I remember being on the plane home from London, coming back to Sydney and just sitting there in my seat and trying to process the whole experience, and thinking that I really wanted to invest heavily in this show.

“I wanted to elevate it out of the realms of that stereotypical tribute show and play beautiful theatres.”

Remember the Days of Cat Stevens remains true to Coggan’s vision and when he performs the show at QPAC’s Concert Hall later this month, he will be joined onstage by a nine-piece band and a string quartet.

“Musically, it’s very authentic to the original Cat Stevens greatest hits and at the same time, I tell the story about how I had the chance to meet him, which was just a remarkable and very surreal opportunity.

“I’ve actually heard firsthand some of the many anecdotes and stories that we share with the audience.  I think the audience come along expecting to hear the songs, obviously, but I think they go away with a real insight into who this man was and why he did certain things in his life and why, at the height of his career, he put down his guitar and walked away from it all.”

Darren Coggan’s Remember the Days of Cat Stevens is at QPAC’s Concert Hall on February 27.  Visit QPAC’s website for tickets.