The $60.5 million HOTA Gallery, which reached construction completion on Wednesday, will be Australia’s largest public gallery outside a capital city.

The gallery, designed to reflect the Gold Coast’s personality with an imposing angled exterior that adds a cacophony of colours to the city skyline, will also welcome visitors with bold new sculptural installations including a six-metre high, double-sided neon, concrete and fibreglass “idol”.

Gold Coast Mayor Tom Tate confirmed the opening of the six-level gallery had been pushed back three weeks to May, but ridiculed criticism of the delay.

“Our gallery is absolutely under budget. The quality and the presentation is world-class,” Tate said.

“That’s a real first-world problem, isn’t it. Our gallery is open three weeks later than anticipated. To make a negative comment of something we can all be proud of is disappointing.”

The daring and colourful artwork by Sydney-based contemporary artist Ramesh Mario Nithiyendran will be positioned at the lower ground entrance to the gallery and will feature a figure with outstretched arms standing on a geometric plinth. 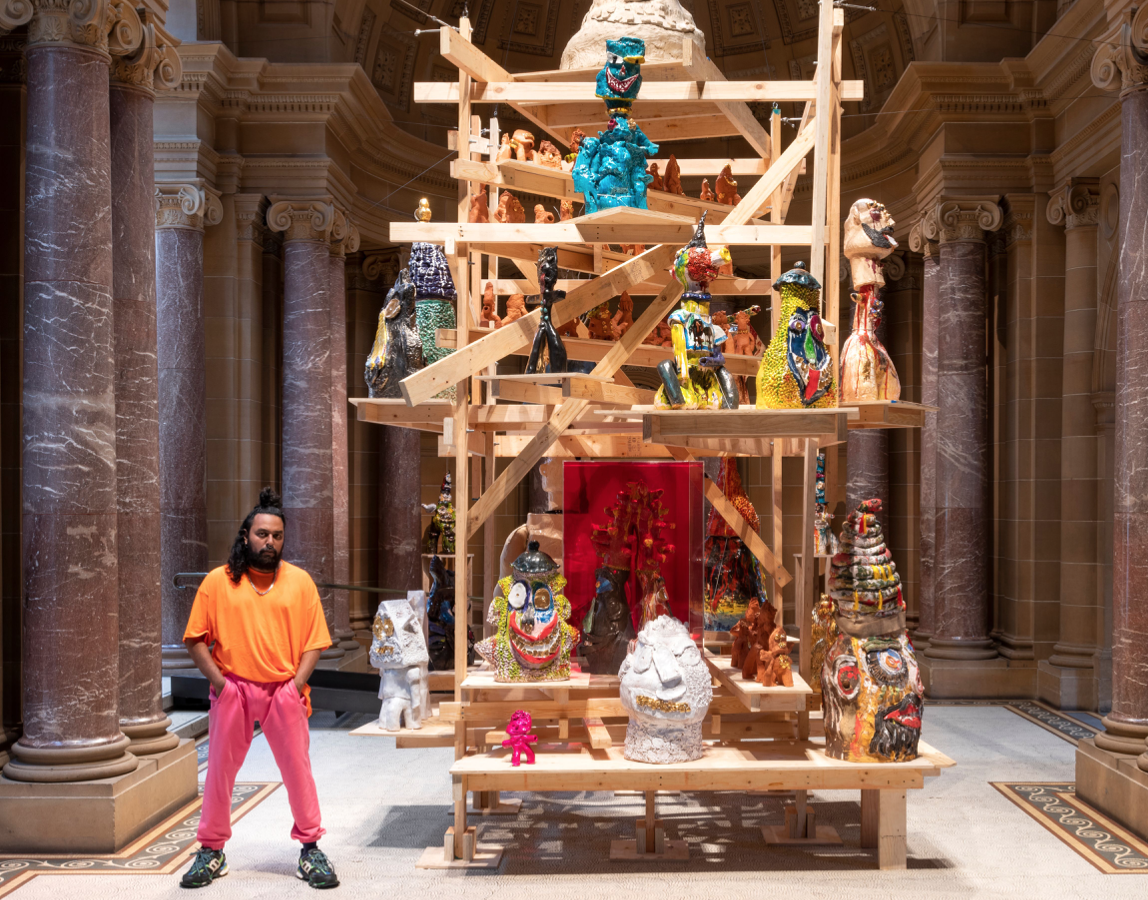 The work will be the largest sculpture attempted by the Sri Lankan-born artist.

A second commissioned sculptural work by Brisbane-based Waanyi Indigenous artist Judy Watson will be installed in the grounds surrounding the imposing gallery, which is the centre piece of the $365 million HOTA precinct that includes the $37.5 million outdoor stage and amphitheatre, Green Bridge and 17 hectares of parklands with a man-made lake for swimming.

Watson’s multi-part garden installation features Indigenous native plantings and a pathway forming a topographical map depicting the Gold Coast location of Nerang prior to European settlement. It includes Piccabeen basket and dilly bag sculptures designed in collaboration with Quandamooka artists Libby Harward and Elisa Jane Carmichael as well as a two-metre tall feather canopy. Local language and motifs expressing cultural stories are being sandblasted onto seating at the site.

“Judy Watson’s collaborative work will create a shared space where we can learn together and acknowledge the indelible Aboriginal culture embedded within, and throughout our shared country,” Cooper Lavery said.

When open, the HOTA Gallery will be home to the $32 million Gold Coast City Collection’s more than 4,400 artworks.

In a coup for the gallery just months after opening, it will host the world premiere exhibition Contemporary Masters from New York: Art from the Mugrabi Collection of around 70 works by influential contemporary artists from Andy Warhol, Jean-Michel Basquiat, Keith Haring, Richard Prince and Jeff Koons in November.