Howson will begin hosting Weekends – which airs from 9am-1pm on Saturdays and Sundays – on January 16.

The popular presenter previously spent 25 years at the national public broadcaster, starting his ABC career at Rockhampton in 1993.

He relocated to Brisbane in 1996 and worked on programs in a variety of timeslots, and most recently hosted the Breakfast program for 11 years, winning 45 ratings surveys.

In the four years since he left ABC Brisbane, Howson has worked as a program quality adviser for ABC regional radio and also as a lecturer and tutor at the University of Southern Queensland, a role he will continue to perform concurrently when he returns to radio in a few weeks’ time.

Reflecting on his decision to hang up his microphone at ABC Brisbane, Howson told InQueensland there were several factors that had contributed to his decision to move on.

“If I had done another year, the show probably would have become stale and it would have been very much the same program it had been for however many years before that,” Howson said.

“Timing-wise, my producer [Bernadette Young] had decided to leave to become a physics teacher in Victoria, which she still does to this day, so a couple of things there collided and just pointed to that December 2016 decision to leave.

Howson’s recruitment at 4BC follows Neil Breen taking over the breakfast slot in June after the retirement of Alan Jones, whose show was syndicated from Sydney; Scott Emerson being appointed as host of the station’s drive program in August and Bill McDonald joining as a weekday afternoon host during daylight saving in October.

Howson said the renewed focus on locally produced content by new owners Nine had been a big motivating factor in getting him back behind the microphone.

“That’s why I’m really keen at this point to join 4BC,” he said.  “As you would know – and as readers would know – 4BC lost its Brisbane-ness, it was a relay station for 2GB and now that Nine has taken over the network, they want 4BC to be a local station again.”

Howson said the media landscape had changed considerably over the past few years, with many people joining local hyper-local Facebook groups to stay informed about issues they would have traditionally learnt about from local media.

“They have those conversations within their suburb but they don’t really know what’s going on across the rest of Brisbane,” he said.  “We can have these conversations that really get into the nitty-gritty, hyperlocal of what it is to live in Brisbane and across Greater Brisbane and southeast Queensland.

“One of the things that I always loved to do and I will do again is mention as many suburbs and organisations and people as I can, so when you tune in and it feels like your radio show for you – your suburb and your city.”

Rumours about Howson’s possible defection to 4BC have been rife for years and Howson said  he decided to accept an offer to join the station after realising how much he was missing radio and also because the role would allow him to continue to educate the next generation of broadcasters at USQ.

“Because it’s weekends it means I can continue teaching at the University of Southern Queensland, which is what I desperately want to do, because I love that and if it was breakfast or drive, they’re five-day commitments, so there’s no way you could teach as well. 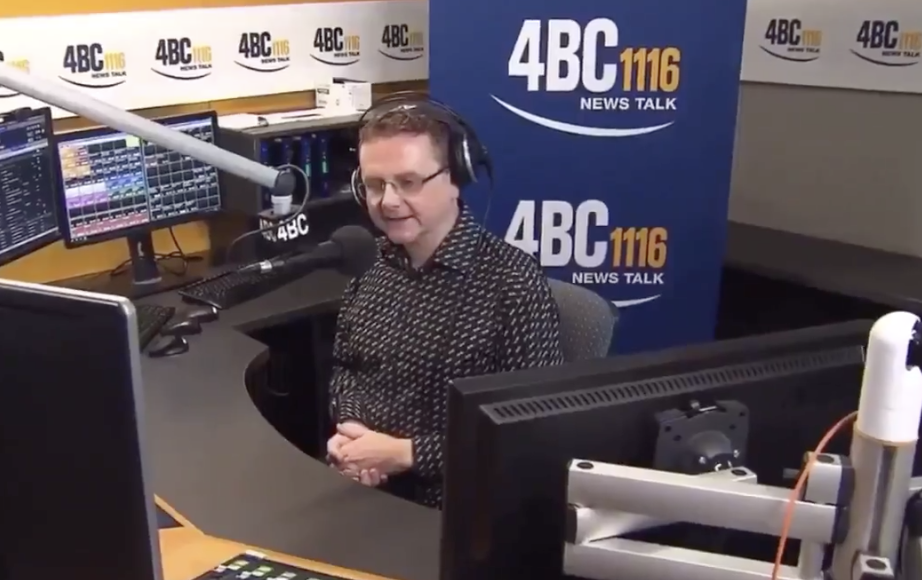 Spencer Howson announcing his return to the airwaves on 4BC.

“I want to get my students involved with interning at 4BC, really set up a career path for the best and brightest students, which I’m very excited about.”

Managing director of Nine Radio Tom Malone and head of content Greg Byrnes have spoken about their ten-year plan for 4BC, and Howson said this long-term vision was also part of the appeal in joining the network and he was in it for the long haul, but he joked “firstly, I hope to invited back to do the Sunday the 17th of January’s show”.

For those familiar with Howson’s presenting style during his years at the ABC, Howson said there would some familiar elements but stressed he didn’t want to simply “repeat what I’ve done previously”.

“I’ve seen presenters do that and it disappoints me when they go from one station to another and just trot out the same act they’ve done previously, so there will be some familiarity but also some new and exciting things to look forward to.

“I like to think of a radio program as being like a dinner party or a barbecue.  At a good dinner party or barbecue or beers at the pub, the conversation is never all light and fluffy but it’s also never all dark and furious.  It swings from one to the other and back again.  That’s how conversations at dinner parties and barbecues go and that’s how I believe a good radio program should be and that’s what I want the program to be.”

Next year will mark 40 years since Howson moved to Brisbane from the UK as a child and he said he has no plans to live anywhere else.

“I will die in Brisbane – that’s how much I love Brisbane – and that love of Brisbane will ooze out of my pores like the sweat we’ve all been feeling this past week and I invite 4BC listeners to celebrate everything that is living in Brisbane with me – not just celebrate but challenge as well.”