Next year marks 35 years since Woodward started presenting Queensland’s weather for the ABC and Weathering Well promises to deliver a potted history of her life as the popular presenter regales audiences with ruminations on everything from personal reflections and weather events to fashion faux pas in a one-of-a-kind autobiographical theatre experience.

The show, which has been two-and-a-half years in the making, will combine comedy, live music, video projections and a well-honed script with Woodward’s natural wit, charm and sunny disposition, with a high probability of entertaining anecdotes and behind-the-scenes revelations forecast.

“The weather is an interesting beast and it has often been used as a light relief within the context of a breakfast program or a news bulletin – and there’s no doubt I’ve ventured into those areas by doing things at the Ekka and when I’ve done the weather on location,” Woodward told InQueensland.

“But I suppose for me, I decided a long time ago I couldn’t be anyone but myself and that’s what I give people every night.  It’s kind of what you see is what you get and that’s what people will see up on stage, that same person,  I’m not going to suddenly turn into something that people don’t recognise.”

Despite Weathering Well being billed as a one-woman show, Woodward has been quick to defer to the experts while producing and fine-tuning the show, which had its genesis in a series of community talks she presented at schools and community organisations such as Probus and VIEW (Voice, Interest and Education of Women) clubs.

“I thought, perhaps I can take that talk and elevate it, because it’s always been well received, so that’s basically where it stemmed from and now we have Weathering Well, which is an amped-up version of a nostalgic look back on my career in television,” she said.

“That was the original kernel I started with and then I spoke to Karen Berkman, who used to be a journalist with the ABC, and we had lost of long chats and she crafted a script from our long chats.”

Woodward’s son Alex, an actor and musician who has become a fixture on the Brisbane theatrical scene with roles in productions including Book of Mormon, Grease The Arena Experience and Pirates of Penzance, will be in the producer’s chair, with Matilda Award-winner Bridget Boyle directing, Luke Volker serving as music director and Nathan Sibthorpe designing audio and visual.

“Alex not only acts, he’s also a producer, so a couple of years ago, I started nagging him, saying ‘have you got a part for me Alex? Do you think there might be a part for me?’

“Eventually he came to me and said, ‘OK, I’ve got a part for you, do you really want this?’ and I thought, oh, why not,” said Woodward, who completed a three-year drama course in Toowoomba and started her career acting. 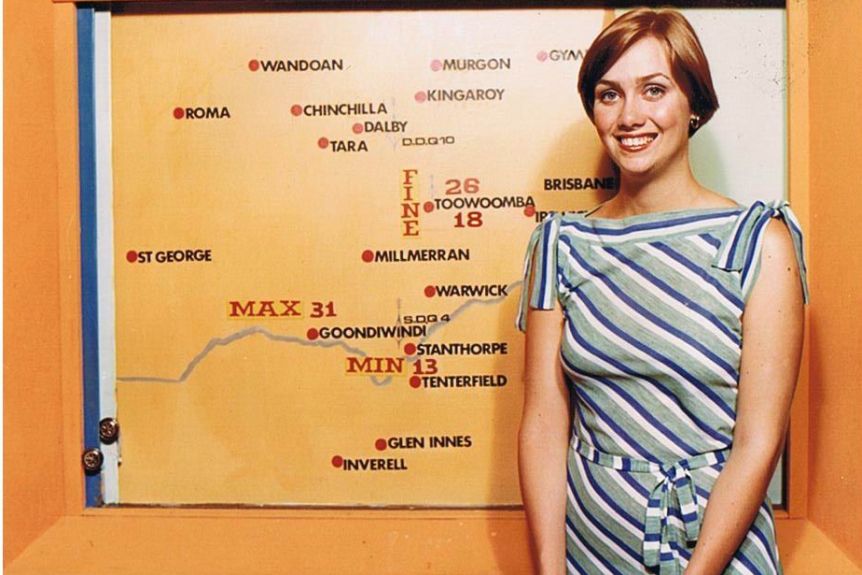 Jenny Woodward presenting the weather in Toowoomba in 1975. (Photo: Supplied)

“I had a role in a musical that Alex produced called Bare and it was a great role for someone who hadn’t been on stage for a long time because it was a small but pivotal role in some ways and it gave me an opportunity to sing.

“It meant that I had to pull out all of my old skills and take some singing lessons and after I’d done that, I felt encouraged by it and thought, maybe I should think about doing something else.  I wasn’t convinced there were many people around town who were going to put me on without an audition apart from my son so I thought, ‘maybe I need to make my own show?’”

Woodward said she was “just thrilled to bits” with the crew that has been assembled for Weathering Well, many of whom she has known for several years.

“I worked with Luke on the show that got me back on the stage, Bear, he was the music director on that, so it’s nice to be working with someone I’ve already me and worked with and it’s been wonderful to see Bridget’s career and the work she’s done and I think she’ll bring a lovely playful element to the show.

“And  Nathan has just completed [Queensland Theatre’s] The Holidays, with all of those beautiful visual scapes he’s created, and he’ll be taking all of my photos and clips from the ABC and before then and creating a fantastic visual landscape for the show as well, so I’m really excited about how it’s all going to come together.”

Woodward admitted taking Weathering Well from conceptualisation to stage had been a far longer journey than she had initially anticipated.

“I was thinking – naively – I could get this up and running in six months from the genesis of the idea but I learnt very quickly that was not going to happen, and if I wanted to have a slick and professional show, which is my aim, then we would have to spend more time producing.

“Alex came on board and said, ‘right, we need to do this and this and this’ and I thought, OK, this is going to take a lot longer, and then of course we’ve had this crazy COVID year and it’s been pushed back yet another 12 months, so it’s been an interesting genesis and I’ve learnt a lot along the way about the process of producing a stage show as opposed to a television show.”

As for what’s next on the horizon for Woodward, she said she has no plans to leave her role at the ABC in the foreseeable future.

“I really love the people I work with, I enjoy the work and I know this sounds really corny but I still get a little thrill every day when I hear that countdown in my ear telling me that I’m going to be on,” she said.  “There’s still that little buzz of excitement and I’ll be there as long as they’ll have me.”

But at this stage, Weathering Well is forecast to be a one-day-only weather event in Brisbane, with afternoon and evening shows currently scheduled.

“We’ve got the Friday afternoon and the Friday night at the Powerhouse,” she said.

“At the moment, I don’t know that we’ll extend the Brisbane season but there are certainly plans in the works to extend the tour to regional parts of Queensland.  That’s the plan and we’re hoping we’ll be able to pull that off … I’d say there’s a 70 per cent chance.”