But delivering an impassioned set of original material, so well-crafted it serves as the musical engine room for the aforementioned troupe’s new 75-minute cabaret show,  requires a level of confidence and innate talent that can’t be faked.

Those who have paid attention to Sahara Beck’s career would know the Brisbane-based entertainer possesses the ability and songwriting prowess to pull off such a feat – and those who haven’t been paying attention would be well advised to snap up one of the remaining tickets to Bite Club, the risqué cabaret group’s collaboration with Beck that’s running at The Tivoli until December 21.

Sahara Beck and Briefs Factory have both managed to keep surprisingly busy schedules over the past few months, with Beck recording a stunning set as part of Ian Haug’s Up in the Airlock Quarantine Sessions online series, performing several concerts as part of Brisbane Festival’s Street Serenades program and headlining shows at the Queensland Cabaret Festival and HOTA in recent weeks.

Similarly, Briefs Factory performed intimate Club Briefs shows at Brisbane Powerhouse for the Lights On program in July and August, instigated a series of impromptu All You Need is Love flash mobs alongside Brisbane Excelsior Band during Brisbane Festival, and took the show on the road for the Wonderland Under the Stars outdoor concerts in Townsville, Cairns and Mount Isa in October.

As a result, both Beck and her band and Fez Faanana’s boylesque drag crew were not only match fit for Bite Club’s opening night, but running like a well-oiled machine that gave the impression of a show returning for an encore rather than one being performed in front of a live audience for the first time.

Pairing Beck’s idiosyncratic songbook with Briefs Factory’s equally individualistic blend of circus, risque cabaret, burlesque and slapstick comedy is a risky move that could have potentially come across like the theatrical equivalent of forcefully and repeatedly mashing a square peg into a round hole. 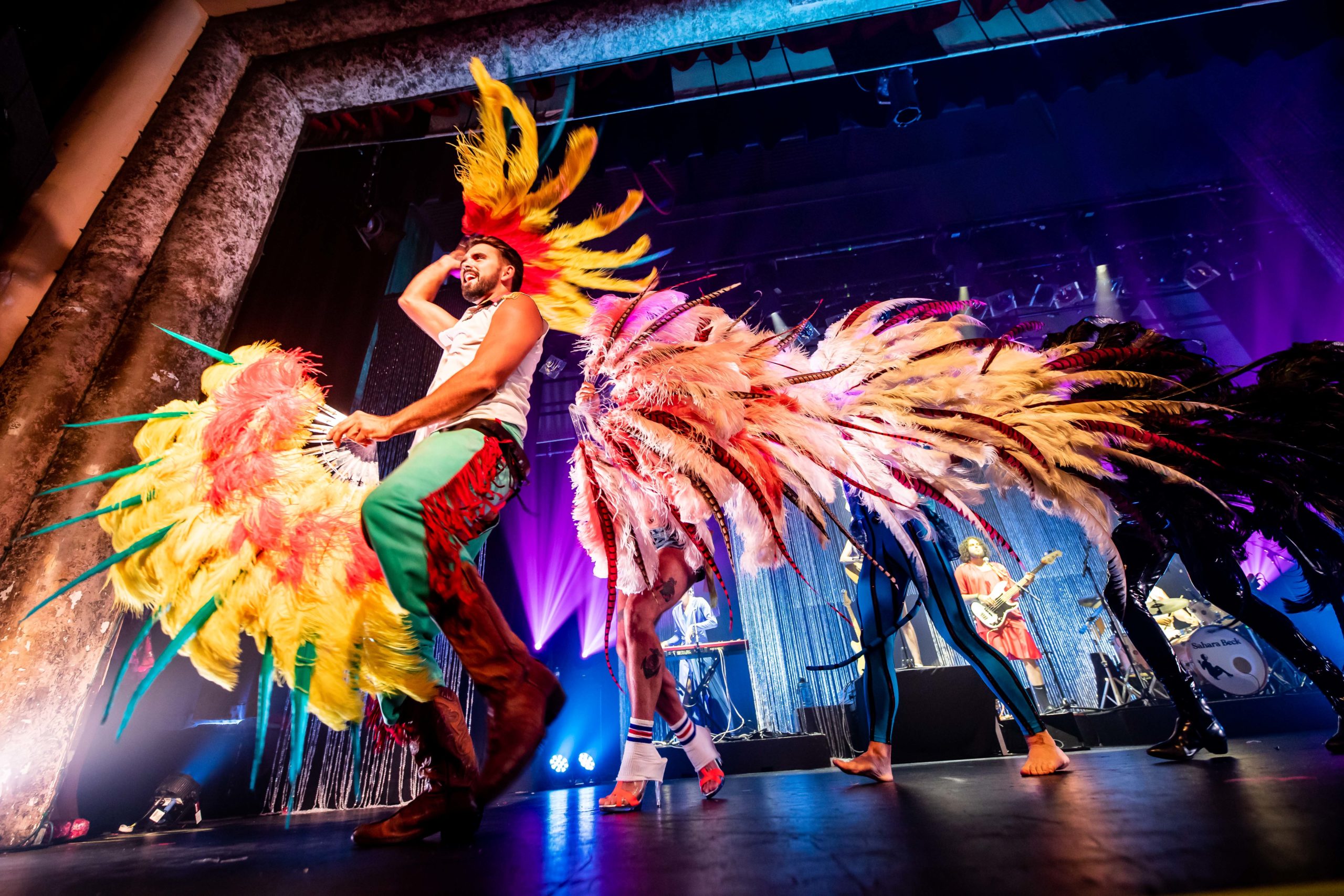 Briefs Factory performers shake their tail feathers during the opening night of Bite Club at the Tivoli.

Instead, the move was a masterstroke, with songs such as ‘Here We Go Again’ and ‘Don’t Overthink It’, from last year’s Queen of Hearts EP, effortlessly melding with Briefs Factory’s choreography and managing to simultaneously convey a sense of spontaneity and cohesion that made them seem custom-designed for each other.

The reconfigured cabaret set-up the Tivoli has adopted for the “dinner and a show” format the venue has been operating under for the Open Season series makes the venue feel warm and engaging while also providing an intimate atmosphere that enhances the theatre’s regal feel.

With QPAC’s forthcoming shows all selling to 100 per cent capacity and an inevitable further easing of social restrictions likely to allow for increased capacity at venues such as The Tivoli, the current slate of shows might be the last chance audiences have to experience the venue in such an intimate way.

But if the necessity of having to present concerts and events in cabaret mode over the past few months were to result in a renewed appreciation of these sorts of cabaret theatre shows, it could perhaps be the only welcome change to the cultural landscape that arises from the pandemic.

But if one thing’s for certain, it’s that this season of Bite Club will further enhance Briefs Factory’s reputation s one of Australia’s most original burlesque, cabaret and circus troupes and ensure Beck’s oeuvre finds its way into more people’s hearts.