In the intervening years, Noonan has travelled the world extensively – including stints living in New York and the UK – but said there was no one defining reason for long gestation period for Utopia?

“I don’t really know, it is what it is,” he told InQueensland. “I released my second album while I was living overseas and then when I came back home, to be honest, I went into hibernation for a little while and then got back to working the record and basically it just took a long time.

“I’m pretty proud of it overall though, I think it’s a really great record and yeah … it flies in the face of what the guy from Spotify says all musicians should be doing now, which is churning out songs like a sausage machine.”

Like most musicians, Noonan had his 2020 touring schedule wiped clean when COVID-19 and was faced with the difficult decision of whether to further delay the album’s release in order to build some momentum by touring, or bite the bullet and get it out there.

“At this point, I should be just about starting my third tour for this album, for the third single,” Noonan said, “and when it became particularly apparent that I wasn’t going to be able to follow through with my national tour, it was a choice of, ‘OK, well, do I just sit on this record or now, or get it out there?’

“I decided to just forge ahead and released [single] ‘Black Dog’ first, because it was a song that was kind of trying to offer a positive perspective on depression, which seemed like it was pretty timely considering the pandemic.”

Although Utopia? is a mixed bag stylistically, ‘Black Dog’ – which draws on elements of traditional folk, blues and reggae – is arguably the most surprising track on the album.

“I guess it’s me connecting with my roots – my roots are Irish and it’s probably the closest thing to a folk song I’ve ever released.”

Noonan said he was more concerned with writing a record that simultaneously showcased the diversity of his musical tastes and cohesively flowed like an album should than he was with writing a collection of songs that would fit with the algorithms of streaming services.

“With this album, I didn’t want to predetermine the style or the genre – even though Spotify would say that’s not how I should be approaching it. I decided to allow each song to just find its own natural place, really.”

Noonan has also released a second single from the album, ‘On My Knees’, which he described as ” an ode to love; an admission of adoration and vulnerability”.

It’s someone who’s saying to their loved one: ‘It doesn’t matter what you say or do, there is no escape for me … I’m on my knees’.”

But the biggest surprise on the album is ‘Snow White’, a funk-tinged number on which Noonan collaborated with McLennan before the former Go-Betweens singer and guitarist’s passing in 2006. 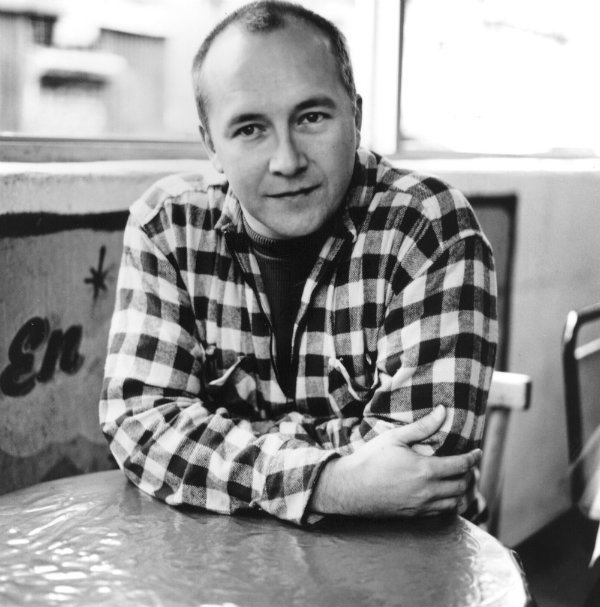 Grant McLennan features on ‘Snow White’, one of the tracks on Tyrone Noonan’s new album Utopia?.

“I don’t think the Go-Betweens ever tried to take on this more funky sound – it’s kind of funk with a dash of disco and some kind of ‘world’ elements,” Noonan said of the track.

“Grant and I had become friends, because he was a great supporter of the Brisbane band scene and he was at quite a few the early george gigs.

Noonan said McLennan had become excited by advances in home recording that allowed him to “be able to hear what he called the symphony in his head”.

“When I look at that, from a more older-school industry perspective, traditionally if you wanted to get strings and all that sort of thing, you had to call in players and arrangers and all that kind of stuff, which is very expensive.

“Around that time, the computers were getting better at recreating some of these sounds.”

Noonan said the song was closer to McLennan’s work with the The Far Out Corporation – a project he worked on with then-Powderfinger guitarist ian Haug, bassist Adele Pickvance and drummer Ross McLennan – than his Go-Betweens or solo output.

“This song was the first kind of step in a new direction for Grant, a new side project or something like that, but we still hadn’t really fully decided what that would be.”

Noonan will be launching Utopia? with a performance at Fortitude valley venue The Outpost next Friday as part of the Queensland Cabaret Festival and said he felt grateful to be in a position to be showcasing songs with his band in front of a live audience.

“[Organisers] Alison [St Ledger] and Greg [Bird] have done an amazing job pulling this festival together, ” he said.  “Obviously it has a lower capacity, but to be able to launch an album at all in this time of the world is just an incredible gift, and I’m so grateful.

Noonan is also about to launch his own series of live-streamed concerts called River Streams – which will feature Brisbane artists including Jack Bratt, Dan Wolsner, Jeremy Neale and his sister and former george bandmate Katie – after securing funding from Arts Queensland

“Each month I’m doing a live-streamed ticketed concert with a different guest artist singer-songwriter, just to talk about songwriting process, playing some of our favourite songs, and playing some originals as well.

“I’ve been putting a lot of time and effort into the streaming world, because that’s something that will continue to exist past COVID – there are some very interesting new platforms where it looks like there may be an actual way to finally monetise music, again.”

Tonight, Tyrone is also performing a live-streamed show with Katie to mark the 20th anniversary of the recording of george’s album Polyserena – which spawned singles including ‘Special Ones’, ‘Bastard Son’, ‘Run’, ‘Breaking it Slowly’ and ‘Breathe in Now’, reached No.1 on the ARIA charts and achieved double-platinum status.