The teen-focused drama tells the story of former elite swimmer and social media darling Claire Carpenter, played by US actor Peyton List, who reluctantly travels to Australia to coach an all-boys’ swimming club after her competitive swimming career is cut short when her self-belief is shaken by an incident in the pool.

Upon her arrival in Australia, Claire is confronted by long-time rival Mikayla Michaels (Lauren Esposito), and discovers the swimming camp she is coaching will be forced to close if the team loses the next meet.

“In a weird way, I think it’s actually the perfect time for this film to be released,” MacFarlane told InQueensland. “Because I think everyone has had such a rough year, and this film is very family orientated, it’s uplifting and it’s just kind of a feel-good family movie.

“And isn’t that what people want to see at the moment? I think everyone kind of wants to put a smile on their face and feel uplifted at the moment, so I think it’s been released at a really good time.”

MacFarlane said she felt fortunate to have secured List – who is best known for her roles in the Diary of a Wimpy Kid film franchise and Disney Channel series Jessie – for the lead role.

“We were having a look at which actors were out there that we felt would be the right fit and Peyton was towards the top when it came to people I would have loved to work with and who I thought was going to be great for this role, so when she accepted it, we were very excited.”

MacFarlane said the support of the local swimming community had been vital during production, which took place in September last year.

“Swimming Australia and Swimming Queensland were a really big support, which was important for me because I wanted the film to feel authentic and we wanted to incorporate real swimmers where we could and really mesh those worlds together while still creating, you know, a drama film.

“I also had [former 50m breastroke world record holder] Jade Edmistone, as a swimming consultant for me so in pre-production I would meet with her and like just grill her about all of her experiences and she spent time taking the lead cast through basic swimming styles and answering their questions as well.

“It was a very big part of making the film for us, having that involvement from the swimming community.” 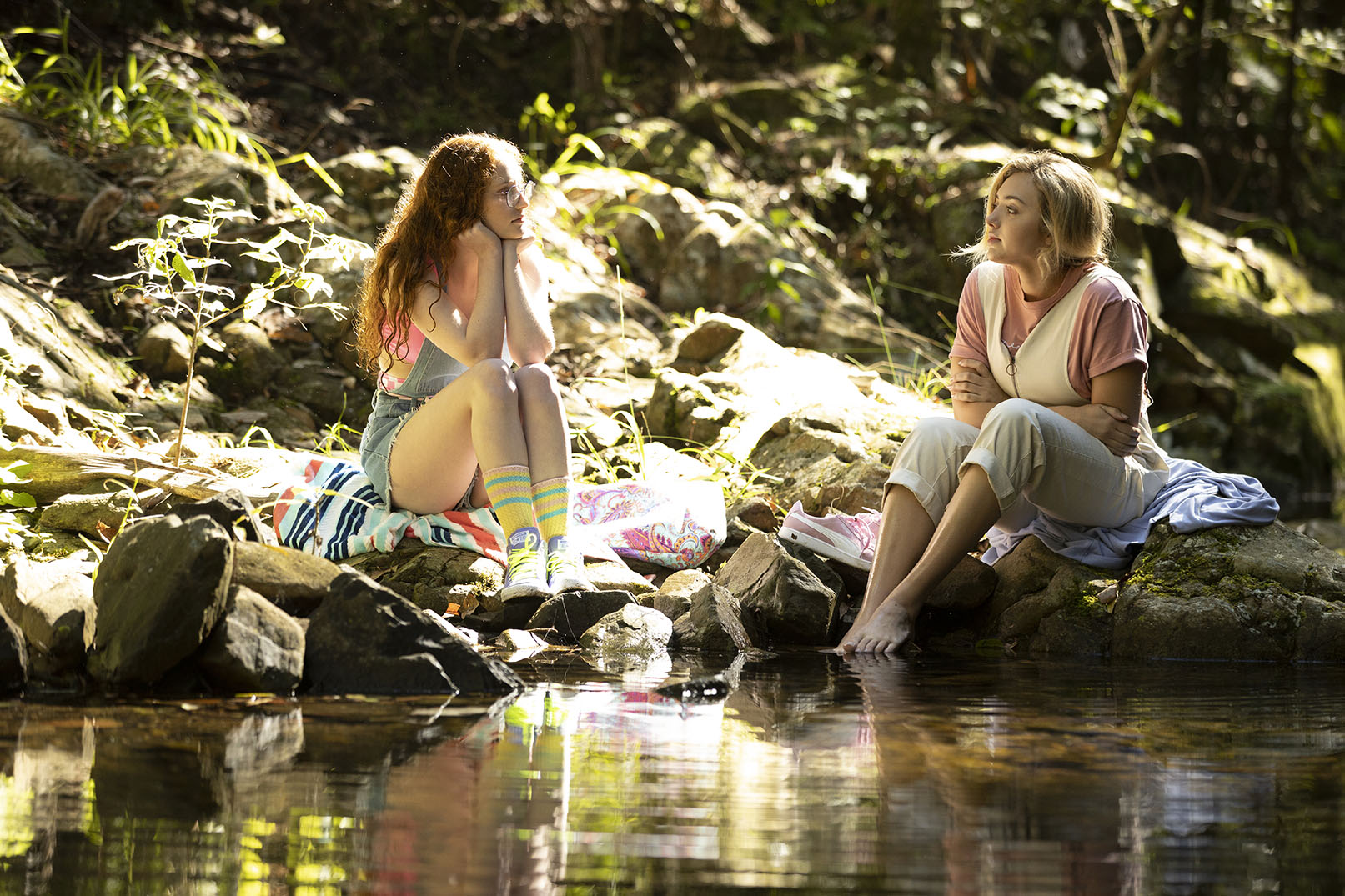 Peyton List and Olivia Nardini in a scene from the film that was shot at Tallebudgera.

Swimming For Gold was shot on location in Brisbane and the Gold Coast and although MacFarlane was mindful of making sure the film wasn’t so parochial that it detracted from its international appeal, she said she relished the opportunity of being able to showcase southeast Queensland to a global audience.

“We have so many beautiful locations here and we definitely wanted the film to be relatable to international audiences but in Brisbane you’ve got South Bank, which has that beautiful walkway, and the city is right next to a man-made beach,” MacFarlane said.

“We’ve got things here that you don’t really have in other places around the world so kind of seems crazy to not take advantage of that.

“We were mostly in Brisbane, the training pool in the film was shot at Logan and we obviously were at South Bank and the waterfall scenes were done down at Tallebudgera.”

She said filming on location in the southeast had been an overwhelmingly positive experience and Screen Queensland had also been “a massive support”.

“They did put money into the film and they also kind of just supported us the whole way through. We really wanted to make it a Queensland film so majority of our crew came from Queensland, and all our locations were he, so it’s very much a local film.

“Everyone was so supportive, and the councils were really supportive when it came to getting shooting locations so it just made the whole process easier.” 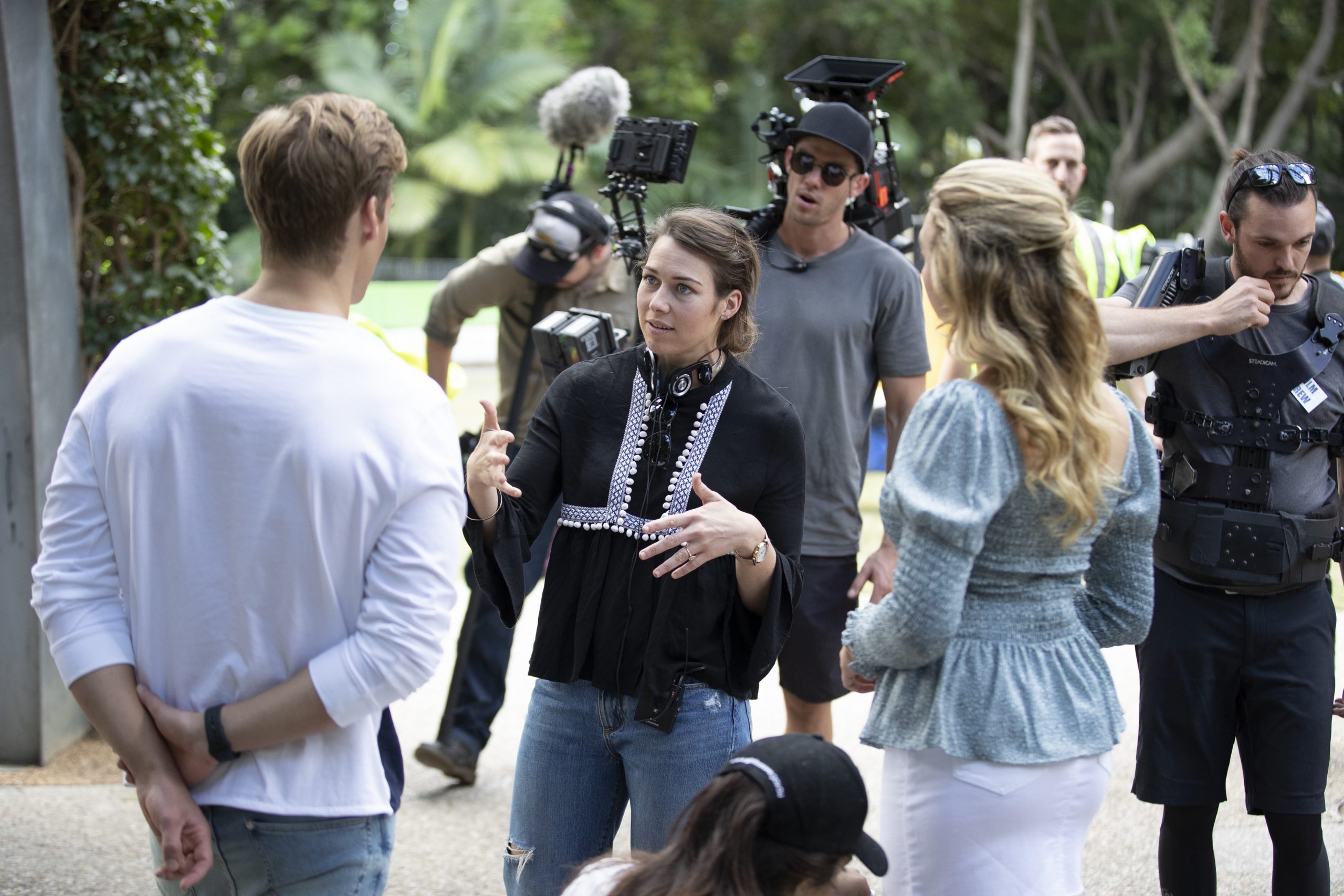 Director Hayley MacFarlane on the set of Swimming For Gold.

The 31-year-old director produced two short films, Hummingbird and the Samar Weaving-starring Growing Young, before concentrating her efforts on reality-TV productions in the UK and Australia, including Big Brother, Love Island and I’m a Celebrity … Get Me Out of Here.

She acknowledged that reality-TV was looked down upon by some sectors of the film industry but said the skills she learnt directing in those fast-paced productions had helped her immeasurably when it came time to direct Swimming For Gold.

“This industry I guess can be quite judgmental and sometimes reality-TV can be frowned upon as though it’s not as worthy as cinema.

“But for me as a director, it has absolutely shaped how quickly I can make decisions, working with a massive team of people, being away from home – there are so many elements that are similar that have really helped me move into directing drama.”

At its core, Swimming for Gold traverses some well-worn themes that include triumphing over adversity and the importance of friendship and MacFarlane said she was confident those messages would resonate well with the target audience.

“When I was a teenager, everything seemed so traumatic and hard and you go through a lot when you’re a teenager, so it was really important for me to break down each of the characters and go, ‘what are they going through?’ ‘what are their struggles?’ and putting that on the screen.

“I want kids and teenagers to watch it and see it and go, ‘Oh, that was really hard for her but she stuck it out, and it was a good outcome’, or, ‘she was going through something and I’ve got a friend that’s going through that’. There are things that they can relate to and it has a positive ending that kind of reminds them to stick it out and to look out for each other.”

Swimming For Gold is in cinemas now