Watching from the wings

Six giant gouldian finches have flown into the city to spread messages of hope for this year’s Brisbane Festival as part of the Messengers of Brisbane installation.

Created by internationally renowned artist Florentijn Hofman and brought to life by Brisbane’s Urban Art Projects, these colourful birds are perched atop structures at some of the inner-city’s most iconic locations, including The Goodwill Bridge, QPAC, South Bank, Brisbane Powerhouse, Queensland Museum and City Hall.

“The Gouldian finches are the most beautifully coloured Australian native bird and the other part that I really love about it is that it raises awareness for an endangered species that was once quite an abundant species of bird in Queensland.

“They will be looking down on us for the whole festival and it’s just a really nice way to herald that Brisbane Festival is on. I really think that they’re going to add an extra bit of magic to the festival this year.”

We are Boldly Brisbane and we are proud to call this brilliant city home. Thank you for opening the Festival with us this weekend. Let the party begin! 🎊

Brisbane Festival might not be going out with a bang with Riverfire this year but visitors can trip the light fantastic with its replacement, Sunsuper Night Sky.

Sunsuper Night Sky is designed to herald the beginning of a new era, a time to come back together and make a connection and every Friday and Saturday night during the festival, buildings across Brisbane’s skyline will play host to an interconnecting and pulsing laser beam installation set to an ethereal soundtrack.

Created by Australia’s most renowned audio-visual artist, Robin Fox, the light installation will be visible from vantage points across Brisbane.

“We needed to think of something that was very much in line with the world we find ourselves in and Robin Fox was the only artist in my mind, that could create what I was looking for.”

Do you want to dance like common people? Then put a spring in your step and a song in your heart at South Bank’s tonight, where a large disco dance floor will take over the Arbour.

Helmed by dance and choreographer Neridah Waters, the Socially Distanced Dance Club is running tonight and the following two Fridays, with sessions at 6pm, 7pm and 8pm.

All participants will be given their own four square metres to dance in, with a strict 1.5m space to be maintained between each dancer. Expect to take a few steps down memory lane, with Waters having described the events as an exploration of “great solo fad dances and crazes through the ages”.

Acclaimed collective Polytoxic have collaborated with a range of local creative minds to give life to an installation that’s being billed as “a time capsule for now”.

From visual artists and dancers, to writers theatre-makers and musicians, more than 100 local creatives have contributed to this work, which communicates their reflections, celebrations and memories of life under lockdown.

These stories have been remixed with breathtaking aerials, soundscape and large-scale visuals, which will be projected on the walls of Brisbane Powerhouse.

Snapshot is love letter to the Brisbane arts community – a shout-out to the movers, dreamers and makers and a tribute to the faces behind the art. 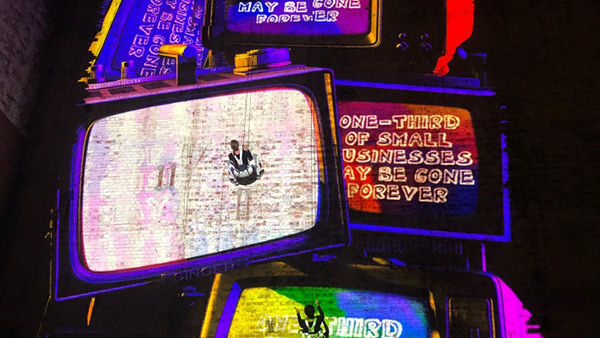 Developed as a collaboration between artist Sally Golding and electronic musician and creative technologist Spatial, this work plays with perception, interactivity, and unexpected encounters, including the viewer’s own reflection captured and integrated within the artwork.

Cultural references, including folklore and science fiction, provide a lens through which to view the impact of technical ingenuity such as dispersed screens and interactivity.

A range of other Brisbane Festival installations – including Avoidable Perils, A Connective Reveal, Brainbow Magic and Brainbow Circles – will also be on show at Metro Arts’ new premises, and several new artworks have also been commissioned at the site to coincide with the festivities.