A petition launched last year to rename Scott Street Park in Rollo’s honour quickly attained more than 1500 signatures and was presented to council by Morningside Ward Councillor Kara Cook. Last week, a motion calling for its name to be changed to Rollo Park was passed unanimously.

Rollo passed away following a heart attack just before his band Blowhard were due to headline a show at Fortitude Valley venue The Brightside in April last year.

He had fronted the ska-punk band for 30 years and was also one of the key figures on the Brisbane independent music scene throughout the 1990s and early 2000s.

Through his work as a concert promoter, Rollo’s Club Splurt – which showcased original live music at a variety of venues including the Treasury, Railway, Gabba and Chardons Corner hotels – gave many local bands their first exposure and he also spent 16 years as an employee of Brisbane City Council’s civic works division.

Cook told InQueensland she met Rollo a couple of years ago when he helped provide staging and sound for a community concert in her electorate.

“I went up to say thank you to some of the people involved in the event and one of them happened to be Rollo,” she said. “He was there with his son and they were providing help to a local charity to run a community concert.

“When I was chatting with him I noticed that he had a Brisbane City Council tattoo on his arm with his payroll number and we obviously got chatting about council and then I got chatting to him about his involvement in the music scene.”

Cook said she was approached by Rollo’s friend and fellow member of Blowhard Ben Jones about the possibility of naming a park in the area after his former bandmate following his death last year.

She said the location of the park reflected Rollo’s passion for the wildlife of the inner southside creeks, and the nearby venues and Brisbane River boat-cruise concerts Blowhard performed at throughout the band’s existence.

Cook said Rollo had left an indelible mark on the city through both his musical output and civic service and she still regularly received correspondence about Rollo from local residents.

“I had a woman contact me just yesterday who said, ‘Oh, Rollo, he did the footpath out the front of my house – great bloke’,” she said.

“He made a huge impact on so many people in so many different ways, whether that was through his council job or music, it’s quite an incredible legacy and it’s nice that we’re able to remember him through a council park – it will bring those two worlds together in some ways.”

Rollo gave many big-name Brisbane bands – including Custard, Regurgitator and Screamfeeder – some of their first gigs but with a catalogue of songs including ‘Big One’, ‘Sexual DV8′, V8 Rock’n’Roll’ and ‘I’ll Polka Your Eyes Out’,  Blowhard never seemed likely to attain the commercial success of some of their contemporaries.

Nevertheless, in 2008, Blowhard were honoured alongside the likes of the Bee Gees, the Go-Betweens, Savage Garden, Keith Urban, Powderfinger, Custard, Regurgitator, The Saints and Railroad Gin with a plaque in the Fortitude Valley Mall. 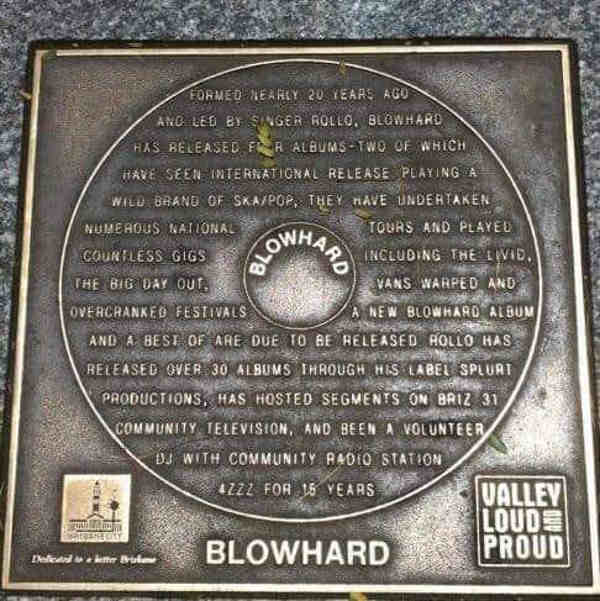 Brisbane musician Lucas Moore, who has played in a variety of Brisbane bands including long-running punk band Dick Nasty, said naming the park in Rollo’s honour was a fitting tribute.

“Rollo really fostered a scene and a lot of those bands went on to much bigger things but he gave them those early opportunities that helped them to become experienced live bands.

“He would give you a go – you didn’t have to get to meet any criteria, which I think was really healthy for the Brisbane music scene because it encouraged people to be creative and not give a crap about how it would be received or be strategic or anything like that.

“Looking back at the first five years of my band, easily half or perhaps more of our gigs came from things that Rollo had organised.”

I interviewed Rollo several times when I was writing for former Brisbane street press magazine Time Off and when he was reflecting on Blowhard’s then-21-year milestone in 2010, he told me, “I felt like we were going uphill and I could see the top of the hill, but we could never quite get there”.

“If we’d have become rock stars that would’ve been well and good but you can only be who you are I suppose, and if you try to be who you’re not then you’re going to get caught out and not get there anyway.

“I was able to stay off the dole for 15 years running nightclubs and hiring PAs and touring in a band and I mightn’t have made a million dollars doing it, but I had a good time, I met a million great people and when my memory works I can remember some very funny things.”

Cook said the process of improving and beautifying the park and organising signage and a information about Rollo’s legacy would begin in the coming months.

“The biggest uncertainty [in terms of timing] is just the impact of COVID – it’s put a bit of a delay on things but finalising the park and having an official opening will definitely happen this financial year.

“We want to do it at a time when we can have as many people as possible involved as well but it will be in the coming months and I hope that we’re able to formalise that by the end of this year or early in the new year.”