Yet a symbolic interpretation of the four points of a compass is simply the creative solution that has enabled SWELL Sculpture Festival on the Gold Coast to go ahead in September, overcoming state border closures, pandemic restrictions, and the nation-wide cancellation of reams of outdoor events.

SWELL Sculpture Festival artist director and curator, Natasha Edwards, said the 1km sands of Currumbin Beach would give rise to around 40 large-scale sculptures to remain the focal point of the 2020 festival from 11-20 September, but this year there would also be a new westerlySWELL in Mudgeeraba, a northerlySWELL in Helensvale and even an easterlySWELL on Chevron Island. 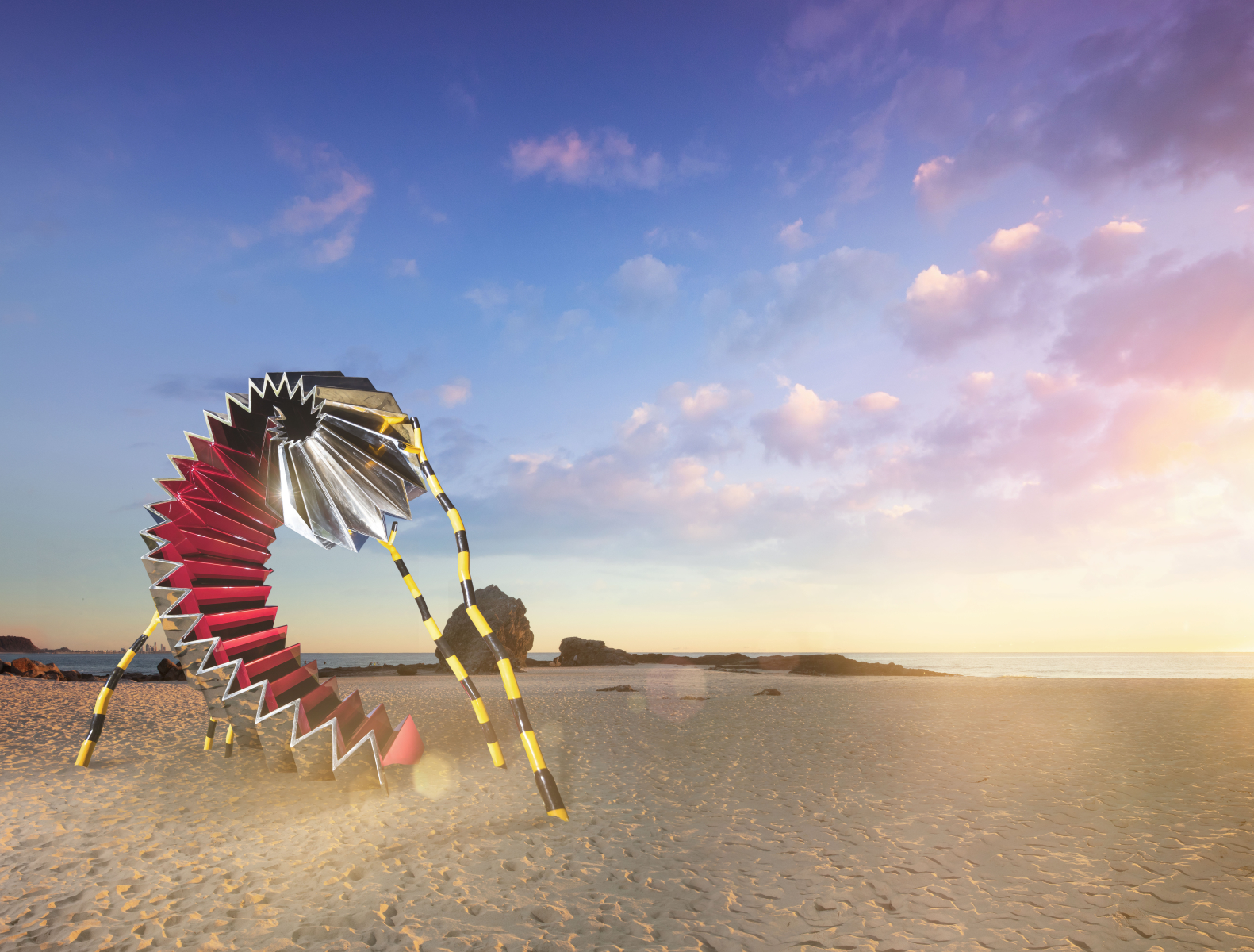 “It’s like a Salvador Dali compass. The Gold Coast is very linear, so we’ve warped it a little,” Edwards told InQueensland.

“Taking it to each point of the Gold Coast comes from the communities that want SWELL to continue and want SWELL to be part of their community.

“They’ve supported it over the years and we’re happy to go to them. We think we’ll find people making a day trip of it and going to each of the different sites.”

The new sites will allow SWELL, that normally attracts around 260,000 visitors annually, to reduce numbers at each location while transforming the city into an outdoor art gallery.

“We had to be innovative and had to reimagine the whole exhibition,” Edwards said.

“At no point have we been told we can’t do the SWELL exhibition, so we’ve expanded it. There’s lots of vantage points and people can see the art while social distancing.

“At each site we try to create something slightly different to what we are doing at Currumbin.”

Edwards said persisting, despite border closures and other COVID-related restrictions, to deliver the sculpture festival that had become a fixture on the national arts calendar was vital to show the Gold Coast and Queensland remained open and was supporting creativity.

“I think it’s really important to continue to have arts in our community at this point, if you were to cut it out it would soul destroying for a lot of people,” she said.

“We need to support this because it’s usually the arts that bring people back together.”

Edwards said artists had responded by producing inspiring works. However, of the 56 artworks accepted in the Currumbin Beach SWELL exhibition, around 15 international, Victorian and NSW artists had been forced to withdraw.

“But everyone has been getting in touch with us saying keep moving forward, because if you do we are too.

“We are super proud that we can have an exhibition and we will have predominantly Queensland artists.”

She said the festival would showcase some returning Queensland artists including Brisbane-based Stephen Newton and Gold Coast stonemason Luke Zwolsman.

Visitors will be able to see Newton’s entry, titled “Can you hear its tender frame screaming from beneath the waves,” appearing like the ghostly skeletal remains of a ship, spanning 9-21 metres and made from charred camphor laurel at Currumbin.

Edwards said many of the works were influenced by major events of the past 12 months.

“It’s quite meaningful and on-point for now as we evolve through this COVID world,” she said.

“Quite often you have an experience with each of the works and then collectively, when you start to put all those thoughts together, a real conversation of real-life issues starts to build.

“It’s a beautiful experience especially when you’re walking along the beach, barefoot and have this real connection with nature.”