Curated by McCarthy-Swann Projects, which is headed by Amy-Clare McCarthy and Kieran Swann, RAZZLE DAZZLE is comprised of works from 11 artists, with nine different sites across the city transformed into spaces to spark imagination and engagement.

The works showcased in RAZZLE DAZZLE explore the relationship humans have with their environment and how we can stand out or disappear within public spaces.

Artworks comprised of patterns, textures and colour, influenced by natural and unnatural worlds hiding in plain sight  will be displayed in lightboxes, banners, vitrines and projections.

Their work will be displayed in lightboxes and banners at locations such as King George Square; Fish, Hutton, Eagle, Giffin and Irish lanes; and Edward St and Howard Smith Wharves, where two light-projection installations will be showcased.

The free all-ages exhibition brings creative works uses the streets of Brisbane as a backdrop, and by utilising alfresco sites in streets and laneways, the Outdoor Gallery provides plenty of open space for viewers to engage and connect with the artworks in a safe and socially distant environment.

McCarthy and Swann previously helmed Brisbane City Council’s 2017 Temporary Art Program with The Weight of Light and The Size of Air exhibitions and although RAZZLE DAZZLE might sound as if was curated specifically to suit these socially distanced times, McCarthy told InQueensland it had been in works since late last year.

“We got the nod on the 17th of December and I remember the exact date because I got the email while I was in labour with my daughter,” McCarthy said.

“Kieran was messaging me, saying, ‘have you heard, have you heard if we got the exhibition?’ and I hadn’t replied because obviously I was busy.

“By the end of the day he sent me a message that said, ‘wait, are you having a baby?’ and sometime around midnight, I was like ‘yes, we got the tender, and yes, I am also a mum now’.

“So yeah, that’s when we first heard that we got it and it had been percolating for a bit before then but a lot of the work unfolded at the start of the year – right before the pandemic kind of really hit was when we started locking in some of the artists.”

McCarthy said Richard Bell’s work, which will be displayed in lightboxes at King George Square, was particularly poignant.

“Richard’s work [Life on a Mission] says in huge letters ‘I’M NOT A NOBLE SAVAGE’ and that’s about challenging how people would perceive him and the kind of racist notions that still exist in Australia towards Aboriginal people, and just calling that out,” McCarthy said.” 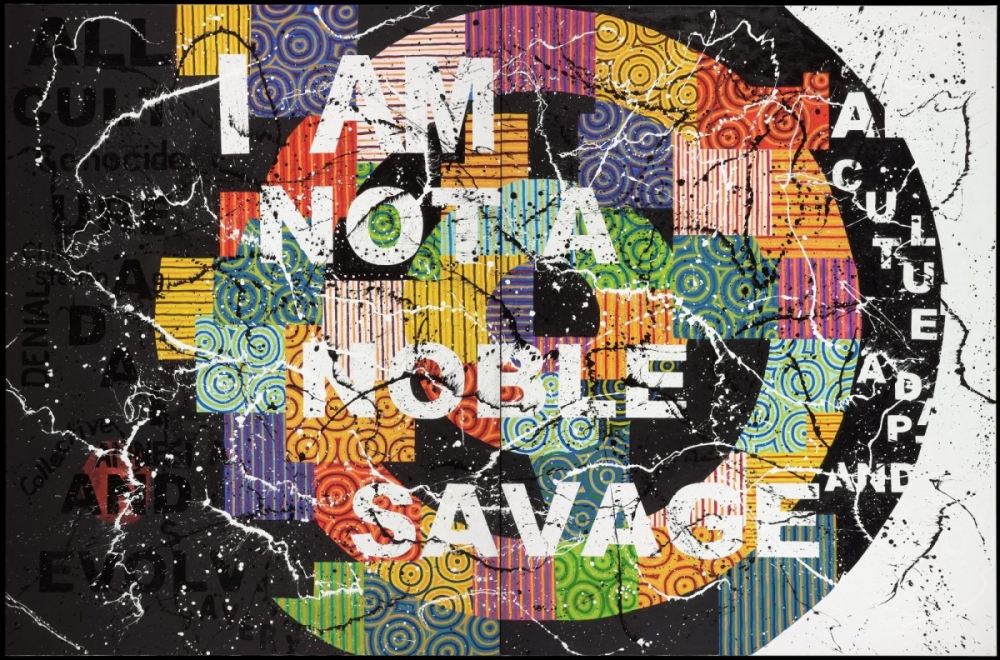 McCarthy said part of the thinking she and Swann applied to their approach was, “If you’re going to put something up in a public space, do something loud so that people want to look at it”.

“There are a lot of competing things going on in the city space so we wanted to put in art that would stand up against all of that and draw in the eye,” she said.

“Rachel and Hannah’s works, in particular, have these kinds of crazy colours, and it’s more about the colour in the form in those ones.

“Then Justin Shoulder and Benji Ra’s work is a bit different – Justin’s in a strange, crab-like costume doing a performance, so you kind of see this creature on the cliff. It was really beautiful when we did the testing for that so I think that’s going to be stunning, too.”

As well as having her work featured in the exhibition, multimedia artist Chantal Fraser, whose textural patterned pieces explore cultural adornment, will take part in walking tours to provide insights into her work.

“The spaces my work inhabits in this project provide an ideal context to explore the paradox between invisibility and hypervisibility,” Fraser said.

In addition to curator and artist-led walking tours, the RAZZLE DAZZLE public program will also include thematic tours, which will be led by experts to highlight selected works.

Gerwyn Davies’ Prawn is on display at Irish Lane in Brisbane’s CBD.

Brisbane Lord Mayor Adrian Schrinner said he hoped RAZZLE DAZZLE would help welcome Brisbane residents and visitors back to the city centre and give the region a much-needed boost.

“I know this exhibition will encourage more residents to explore the inner-city, support our local artists and inject some much-needed income into our retail and dining scene.”