Eighty-nine per cent of Australians live in cities or towns, which means that most of us are surrounded by human-made structures. Some of those buildings are beautiful; others are practical. Some add equally to the pleasure and amenity of our lives.

The best of them also say something about the way we were and the way we are now.

The architectural maxim “form follows function” dictates that the shape or look or a building is informed by its intended purpose.

If you look around our state, it’s obvious that many buildings follow that principle. But it’s also the case that some buildings are both beautiful and functional, and that some of them appeal to us on a visceral level.

Structures that are attached to a particular event, a period or event in history, or a fond personal memory hold a special place in our hearts and minds.

Despite what seemed like a concerted effort to obliterate many of them under the Bjelke-Petersen era (and, in some cases, more recently), Queensland still has a few buildings that directly link us to the colonial past.

Other architectural eras are also represented – from the Art Deco McWhirters building in Fortitude Valley to the Brutalism of the Queensland Cultural Centre – and while there are some very ugly tower blocks in the capital and larger regional cities, some of the newer buildings manage to be both aesthetically pleasing and fit for purpose.

Since appreciation of architecture is a personal thing, I asked some prominent Queenslanders to nominate their favourite buildings and to explain their appeal.

The building, inspired by the shape of a crystal, was designed by Kisho Kurokawa, a distinguished architect whose work can be found in his native Japan and around the world.

Conry described it as “a stunning addition to the Brisbane CBD skyline”.

“Central Plaza was the city’s tallest building when completed in 1988 and it remains a prominent and superbly located building,” he said.

“The impressive lobby and the tower’s crisp lines, form and colouring are timeless and still dominate the streetscape and skyline.” 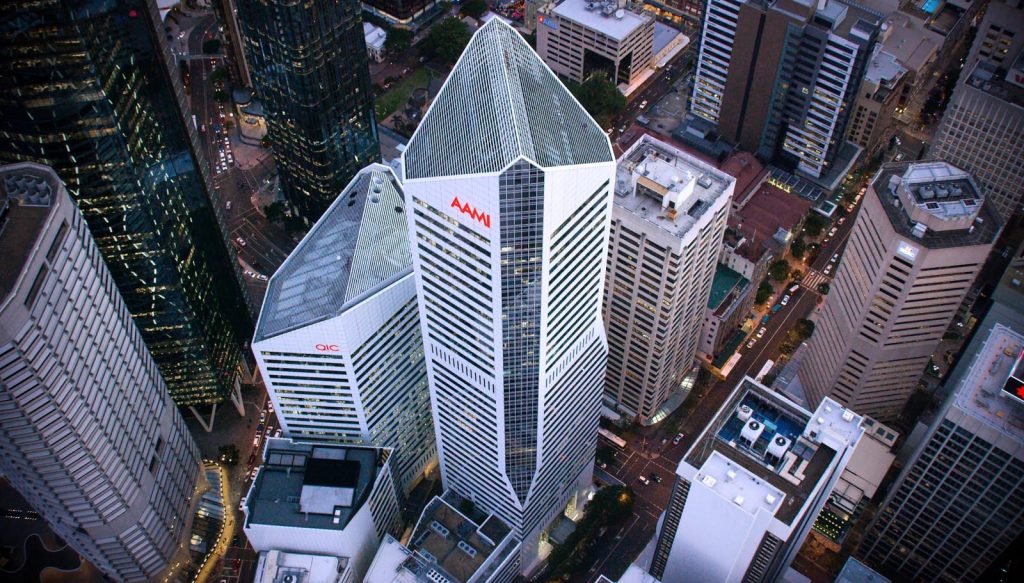 Margaux Parker, from The Big Breakfast on Brisbane’s Triple M, said she was “a sucker for heritage-listed buildings”.

“We are not quite Adelaide and their city of churches but in Brisbane we have some amazing religious buildings,” she told InQueensland.

“The Cathedral of St Stephen and St Patrick’s Church in Fortitude Valley are two of my favourites, but my absolute favourite is St Mary’s Anglican Church, Kangaroo Point.”

Parker and her husband, former Brisbane Broncos star Corey, were married at the church, and their children were baptised there.

Parker also nominated Brisbane’s Customs House, the Treasury Hotel, the Old Museum, the Regatta, and the Stamford and Marriott Hotels. All of them are associated with fond personal memories.

In his role as executive director of the Local Government Association of Queensland, Greg Hallam travels extensively and has favourite buildings across the state.

He named the Cassowary Coast regional council building in Innisfail for its “classic Art Deco” that “dominates the town skyline”.

Hallam’s other choices were the Stock Exchange and World Theatre complex in Charters Towers, the Hotel Corones in Charleville (a “masterpiece”), the “beautifully restored” Empire Theatre in Toowoomba, and Customs House in Rockhampton.

For Brisbane radio station 4KQ weeknights announcer Brent James, also a passionate advocate for heritage buildings, the question evoked a memory of a place that no longer exists – the Gold Coast before the wave of high-rise development.

“As a kid we had one of those old beach shacks on Hedges Ave at Mermaid Beach where we spent almost every weekend,” he said.

“My favourite place is walking on the beach in that same area where that house once stood. So many good memories on that stretch of sand.”