She is a radio presenter and producer, a cruise-ship entertainer and one-half of a Queensland power couple. But most of all, she’s hilarious.

Although even she finds it hard to believe, Kat Davidson has been in the stand-up business for two decades. And it all began because of a dare from her performing arts teacher.

“In my final year of uni at QUT, the amazing Sean Mee challenged me to do something truly terrifying,” Davidson told InQueensland.

“He cottoned on that I was kind of coasting and he refused to let that be the case, so he said: ‘Let’s do something scary, what would that be?’ And it turned out to be a stand-up performance.”

Fast-forward 22 years, and Davidson has just started again, performing her first gig in four months at the newly reopened Sit Down Comedy Club at the Paddington Tavern two weeks ago.

“It was great, [but] it was very strange,” she said. “I haven’t been away from stand-up for that long since I started. It was very strange getting up there and working out how that muscle works.”

“Yeah, I kind of fell off. In the first 10 minutes, I was just genuinely looking at the crowd going, ‘Hi, wow’. Thankfully, they were just as rusty, so we worked it out together.”

Due to the COVID-19 restrictions, it was a “full house” of 100 people, down from the usual 300 capacity of the venue.

“There were people there who clearly hadn’t been let out for quite some time, and they tried to drink all of the things they’ve not drunk for four months. That was unpretty, but we’re used to handling that.

“When the bottom fell out of it, it was really difficult, and coming back to it has truly felt like coming home. I feel very privileged to work at a place where that’s possible and sad for those who can’t [return to work].”

While the club is open again, Davidson will have to wait a while before she gets back to performing on cruise ships. The Sit Down Comedy Club has an exclusive deal with P&O Cruises to provide stand-up acts for its Australian sailings.

“It’s in my blood, I miss it,” Davidson said. “I get to go to sea with the best of the best. I’m onboard with Dave Hughes and Pete Rowsthorn and Cal Wilson. I get to work with them, and I get to see them work. You raise your game when you’re among the best.”

Cruising in Australian waters has been suspended at least until November, so that part of her life remains on hold. However, Davidson is concerned about the plight of crew members stuck on ships, with no port willing to let them disembark, while their families struggle in countries hard-hit by the coronavirus.

“There’s been bad press about cruising, and some of that has been difficult to swallow because it’s only coming from one side,” she said.

One of Davidson’s other passions is promoting women in comedy, and she has hosted several Ladies’ Night events with all-female bills.

“It’s still male-dominated,” she said of the comedy scene. “Men demand higher prices for their tickets and they sell more tickets.”

She said even other women were often surprised that they had enjoyed female comics, but “I think that’s changing over time simply by virtue of us being out there and being funny”.

Her dream is that all stand-ups are judged on one thing alone: “You’re either funny or you’re not.” 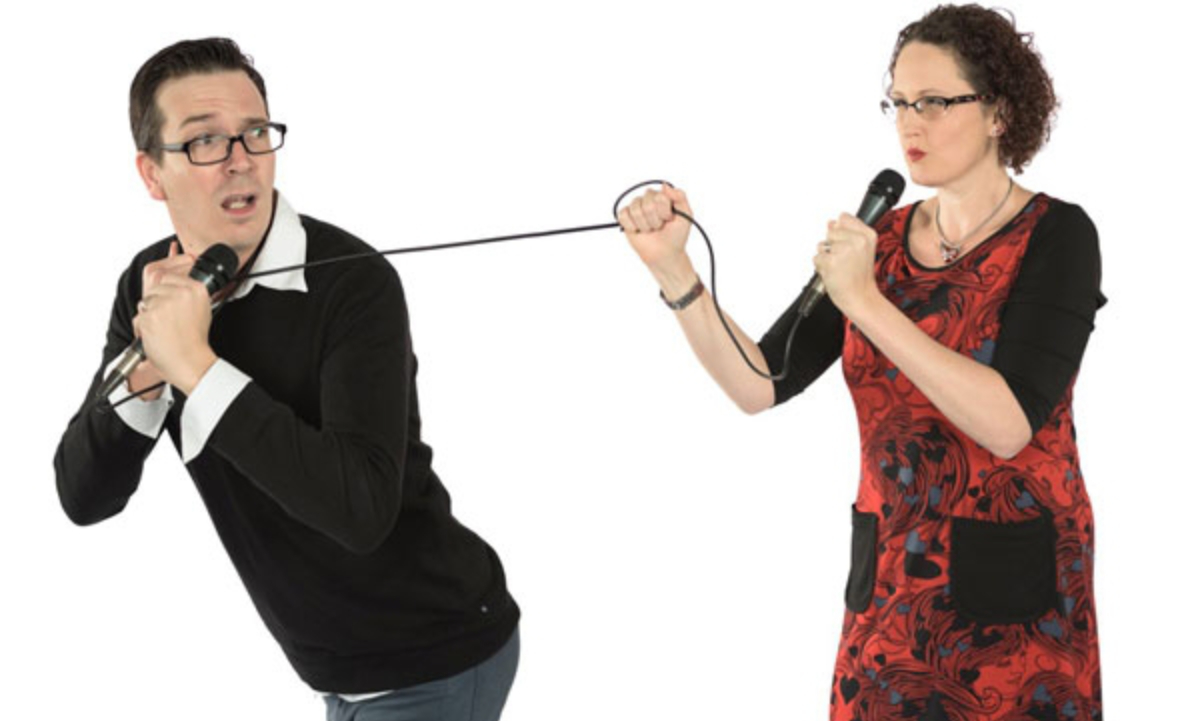 Stav and Kat Davidson as a double act in He Said, She Said. (Photo: Supplied)

Among those performers who make her laugh is her husband, Stuart “Stav” Davidson, from radio station B105’s Stav, Abby and Matt show.

“We’re different kinds of funny. He’s a pun-master, I’m a storyteller – so I think we get away without stepping on each other’s territory in that way,” she said.

“He’s a breakfast radio star and I do the ABC. Sometimes we talk about what we said on air that day and it’s just a different universe.”

Those two worlds collided a few years ago when they performed on the same bill in a show called He Said, She Said which played at the Brisbane Powerhouse and other venues around the south-east.

“It was so much fun,” she said. “It was really lovely to be able to tell our story at the same time. You often get the male perspective and the female perspective, but [it’s great] to have the same story told from different sides.

“We had a lot of people saying, ‘We thought we were the only people who fought like that.’

“Getting to work right next to him was very, very cool.”

While the comedy has been on hold, Davidson has been busy on air, and behind the scenes, as a casual announcer and producer with ABC Radio.

“It keeps my brain active,” she said of the radio work. “I don’t get bored.”

But she gets a special thrill performing stand-up in front of a live audience.

“I’ve tried to step out of it, but it pulls me back. It’s the thing I am most happy doing, apart from being with my family.

“I can’t imagine life without it.”