From the provincial court rooms of England to the dressing rooms of Hollywood stars, Eric Scott has seen a lot in a professional writing career spanning 60 years.

But it was his move to Queensland in the early 1980s that set him on the path to winning an Australian honour for his contribution to the arts.

Scott, now a very active 83-year-old, worked as a reporter and gossip columnist first in England and later for TV Week and TV Times in Melbourne before he moved north in 1982 to take up a job at the Catholic Leader newspaper in Brisbane.

Since then he has written plays that have been published and performed around Australia, in the United States and Canada, and an autobiography that deals with his exploits on the showbiz beat.

Only one thing that didn’t quite work out as planned, and that was a film script that never got filmed and is still lying in his bottom drawer.

But that’s getting ahead of the story, which according to his autobiography, I Could Have Been a Contender, canvasses his “climb out of the working class terraces in Nottingham UK, to a champagne and lobster lifestyle in five-star hotels”.

He introduces himself in the preface: “I have fallen dead drunk with superstars, dined with glamorous actresses, talked with the most famous people of stage and screen, had three novels and two books of one-act plays published and seen many of my children’s, teenage and adult plays performed on many stages – oh and I’ve had five wives.”

Scott saw Buddy Holly perform in concert, met George Harrison, John Lennon and Ringo Starr (but not Paul McCartney) in their dressing room, got an autograph from Ella Fitzgerald and interviewed a “flirty” Dusty Springfield. He also had encounters with Tom Jones, James Stewart and Muhammad Ali – “the most charismatic man I have ever met” – and escorted Gina Lollobrigida to the Logies.

Scott said his secret to interviewing the big stars was to put them at ease by not using a notebook or tape recorder. He would write the stories on the way home while the chat was still fresh in his mind.

Remembering conversations verbatim, he said, was a knack he acquired as a young court reporter – where he did take notes, for legal reasons, but discovered that his memory of what was said aligned perfectly with the official record.

But there was one time when there was no interview to remember. When he was short of items for his weekly gossip column in a TV magazine, he simply wrote: “Who is the well-known actor who was seen out on Saturday night with a woman who wasn’t his wife?”

The morning after publication, a popular performer – who I won’t name because he is still alive – rang Scott and said: “Was it me?”

After his move to Brisbane, his job as a sub-editor and theatre critic meant he had time to pursue his interest in writing fiction. Scott’s first break as a playwright came was when he was directing a children’s play at Sunnybank Theatre and was asked if he could come up with something “more modern”.

“At the time, the plays for children all had adults in them,” he told InQueensland. “So, I wrote a play that could be performed by kids.”

Others followed, including his most popular work, The Great Fairytale Robbery, which became a musical with a score by Brisbane singer-songwriter John Regan.

Scott was inspired to write his screenplay after attending a lecture on the art of scriptwriting. Based on a real-life crime involving a police officer and a body in a wheelie bin, his murder thriller generated a bit of interest within the industry and was shuffled around various offices for months.

The message came back that he would have to get a producer – that is, somebody prepared to put up the cash – before the film could be made. The script remains on the shelf. 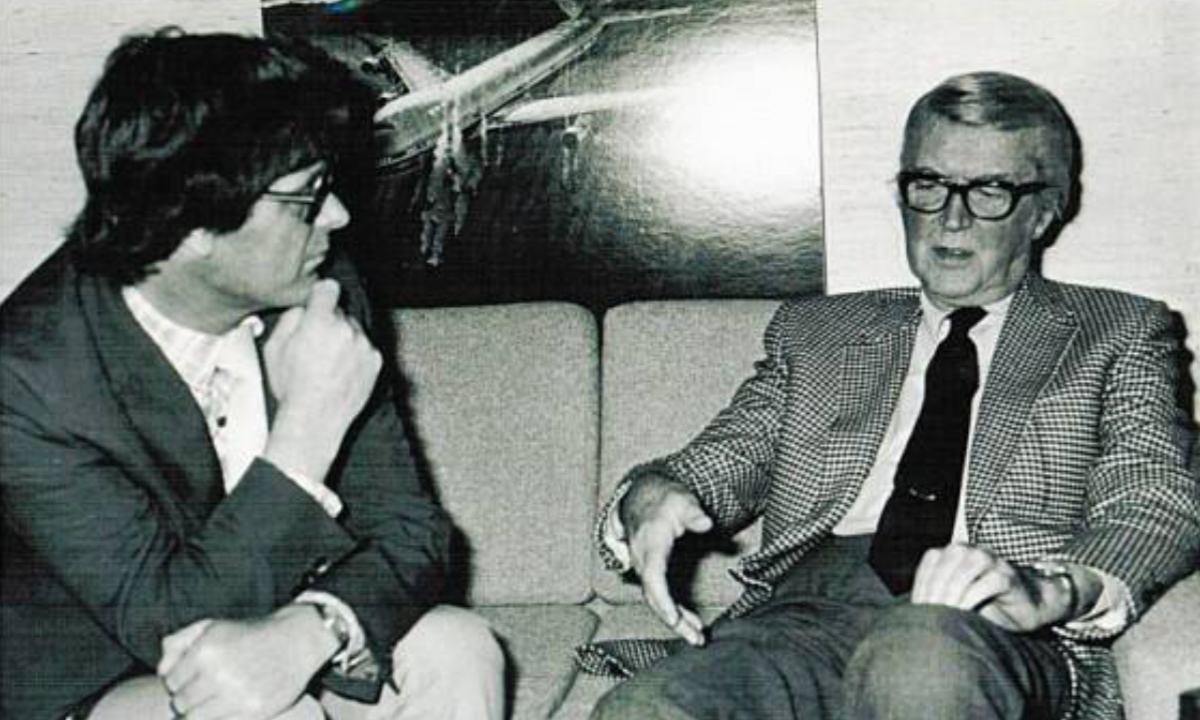 Hollywood legend Jimmy Stewart was one of the many stars Eric Scott has met over his long career. (Photo: Supplied)

Despite this setback, Scott has kept busy writing showbiz and travel articles for his blog, Absolute Theatre, and as “mayor” – secretary and emcee – of the Glugs of Gosh, a group of theatre aficionados who meet for lunch in the company of a big name or rising star.

The monthly meetings, at the Paddington Hotel, have been suspended due to the coronavirus, but Scott hopes things can return to normal next month.

But his time in lockdown hasn’t been entirely uneventful. Along with his wife, respected piano teacher Deanne, and his daughter Kellie, an ABC journalist, Scott went to Government House late last month to receive his Order of Australia Medal (OAM) from the Governor, Paul de Jersey.

It was the culmination of a process that started with an email many months ago. Scott said: “I thought, ‘I’ve got some spam here from the Governor’, but it was real.”

Unlike the usual ceremonies, where dozens of people can receive their awards at one time, it was a private session that concluded with champagne and afternoon tea.

Scott is understandably proud of the award and reckons even he was impressed with the citation noting his contributions to the arts as a writer and critic.

“When I read all the things I’d done, I thought, ‘This bloke has been busy.’”

So, what’s next? Well, there’s always that film script in search of a producer.