When Alan Jones announced his retirement from radio this month, it was revealed that, for the first time in five years, Brisbane’s 4BC in Brisbane would be getting its own breakfast show.

After a brief guessing game, Nine Entertainment, which owns the former Fairfax/Macquarie radio network, announced the host would be Neil Breen, a Queenslander who has worked most recently as a senior sports journalist on Channel 9 News in Sydney.

Breen told InQueensland that the new gig had been “bubbling away for a while” in his discussions with one of his bosses at Nine, Tom Malone. “When [Malone] took over the radio division, it was the first thing he said to me: ‘I’m going to go back to local programming.’”

But at that time Jones, who broadcasts from 2GB in Sydney, still had a year of his contract left to run.

“I had no visibility as to what Alan’s state of mind was and what he wanted to do,” Breen said. “I didn’t have a clue that he was going to retire from radio.”

But with the coronavirus taking hold and the October Queensland election getting closer, the idea of increased local content on 4BC seemed more urgent.

“I thought, if it’s going to happen, we’re going to have to pull the trigger and do it,” Breen said. “But as it happened, Alan pulled the trigger himself.”

Jones’s last show will be on Friday, May 29, and Breen’s first will be on Monday, June 1.

Breen grew up in Brisbane and was a cadet at the now-defunct Daily Sun before climbing through the ranks at The Courier-Mail, where he became sports editor in his mid-20s. He moved to Sydney and was appointed sports editor at The Australian. From 2006 to 2012, he was editor of The Sunday Telegraph, the biggest-selling newspaper in Australia.

Breen said he felt relaxed about taking the helm at 4BC and believed that he had the attitude and skill base to tackle the job. He would make his own way and not try to mimic the bombastic style of Jones and morning announcer Ray Hadley.

“There’s only one Alan Jones [and] one Ray Hadley,” he said, adding that he would be doing a lot of listening as well as talking in his new job. “The key is to get people to call in and talk to me and talk to the other people of Brisbane.”

To succeed, Breen will not only have to win over listeners – Jones currently has about 9 per cent of the available radio audience in Brisbane – he will also have to convince Queensland advertisers to come on board.

As for the show’s content, Breen said he expected the recovery from coronavirus to be a major topic of conversation.

“Everybody’s affected by it in some way, so let’s talk about it and try to move forward together,” he said.

“Of course, there are a lot of other issues, but the Premier is under pressure about how she handles coronavirus – as is every other leader in the world. She’s not Robinson Crusoe in that.” 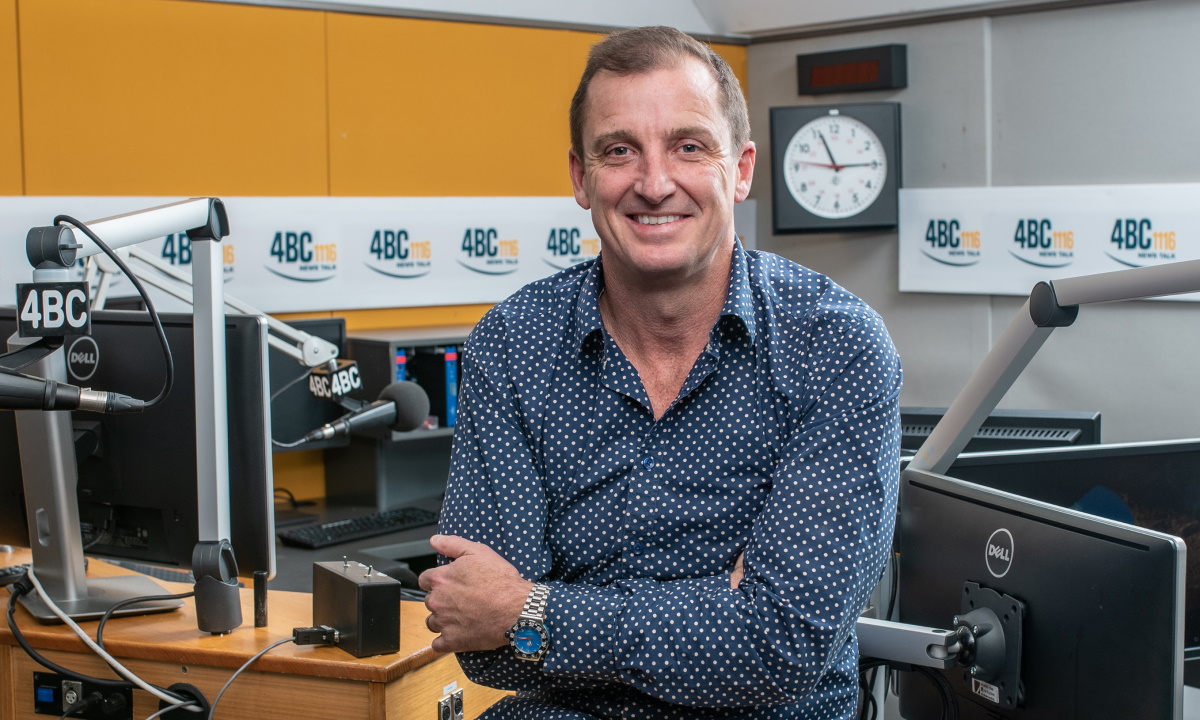 In taking over from Alan Jones, Neil Breen has big shoes to fill. (Photo: 4BC)

One concern some 4BC listeners have had over the years is the networked coverage of rugby league, especially the annual State of Origin series. The critics may be pleased to know that Breen is a dyed-in-the-wool Maroon.

“My nephew, Moses Mbye has played State of Origin for Queensland,” he said. “We’re really close to Moses and that was an unbelievable source of pride for me.”

While he insisted he’d “had good fun all those years being a Queenslander in Sydney”, Breen and his wife, journalist Elizabeth Meryment, were keen to get back home.

His appointment has been generally welcomed in Brisbane media circles. Few dispute Breen’s journalistic credentials – he is the winner of the profession’s highest accolade, the Walkley Award, and television’s Kennedy Award – although some pointed to his reputation as a hard taskmasker.

One former Courier-Mail colleague noted on social media that Breen “worked very hard and expected those around him to do the same”. For his part, Breen said he did what was required of him when he was promoted to modernise the sport coverage.

In a 2011 interview, while he was editing the Sunday Telegraph, he admitted to having been a bit “gung-ho” at times. He also apologised for the publication of nude photographs that were falsely claimed to depict now-senator Pauline Hanson.

In 2013, Breen “sacked himself” as executive producer of Nine’s Today show after reports of clashes with on-air staff. Since then, he has found his niche in Channel 9’s rugby league coverage and as a regular fill-in host on 2GB and 4BC.

He told InQueensland that the Today incident developed because he didn’t realise the differences between running a newspaper and a morning television show. As for Hanson, well that hatchet was buried after she rang a radio show he was hosting and they talked it through.

Although he has only just arrived back in Brisbane, Breen is looking well into the future.

Does he see himself staying in the job as long as Jones, who is retiring at the age of 79 after 35 years behind the mic?

“I turn 52 my first week on air, and I hope I can make a good fist of it,” Breen said. “I shouldn’t say this, because people like you will hold me to it, but I plan for it to last a minimum of 10 years.”