The Ibis Styles hotel in Brisbane’s CBD has an enviable view of the Brisbane River and the front of the building overlooks South Bank, so soon after Queensland’s social restrictions were implemented and occupancy rates plummeted, the hotel’s general manager Todd Creighton decided to put the empty rooms to use, sharing some positive messages with the community via the hotel’s room lights.

So far, the hotel has shone a light on the contribution of the state’s health workers by using lights in unoccupied rooms to form a medical cross, commemorated Mother’s Day with a giant love heart and the word “mum”, sent a message of solidarity to hospitality workers with a knife and fork and paid tribute to Anzac Day with a giant candle.

This week, the hotel has depicted a football to celebrate the return of the NRL, with the Brisbane Broncos to take on the Parramatta Eels at Suncorp Stadium tonight. 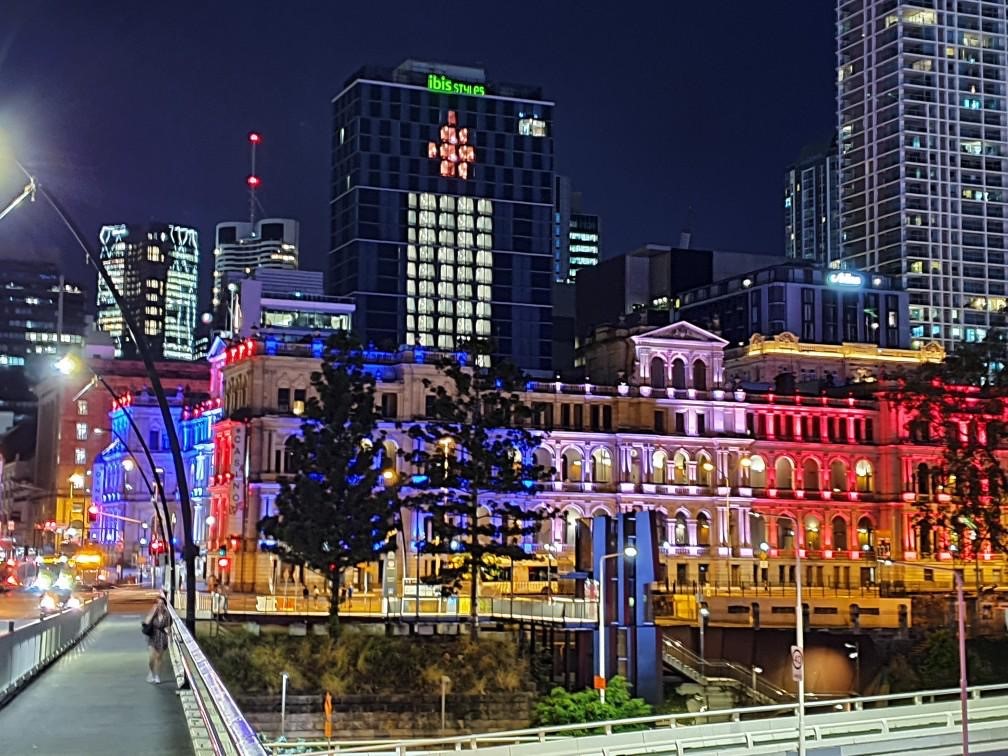 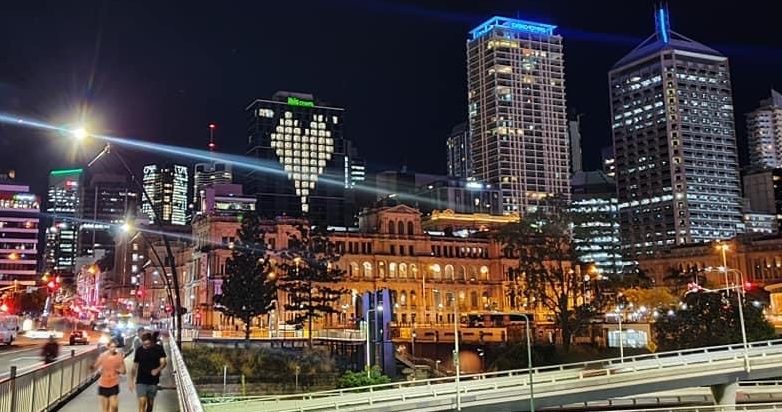 “We always sort of thought that the front of the hotel, which looks over South Bank, that when it’s all lit up it would almost be like a big TV, where the windows would be like little pixels,” Creighton told InQueensland.

“So we always knew we could do something really cool, but we never really had a chance to because normally the hotel’s running at 80 per cent capacity, so all the rooms are usually being used.

“When the occupancy went down, it gave us a chance to have a bit of fun there and the first thing we did, right at the start of the whole lockdown, was put up a love heart. A whole lot of people – particularly in our industry – were losing jobs and doing it really tough, and it was just a really simple little message from us, just to share a bit of love.”

“The next week was Anzac Day, so we did a candle, we did a medical cross to say thanks to all the doctors, nurses and everyone in the medical and healthcare sector, we recently we had a smiley face up on the building just to brighten everyone’s day and we’ve got a footy up there at the moment to wish the Broncos all the best this weekend.”

Creighton said the hotel had received plaudits from former guests and strangers alike, as well as plenty of positive feedback via social media.

“A heap of people have started talking about it, and we had previous guests calling us and emailing us – and even people who had never stayed before ringing us and just saying ‘wow, what a really cool thought’.”

Creighton said the hotel’s engineering manager Tim Roberts had plotted out the building’s front facade in an interactive spreadsheet that corresponds to each room’s lights, “so we know where each window on the front of the hotel is and what room it is related to”.

“We know we can go down as low as the ninth floor and it can still be seen above the casino,” he said. “So he goes into Excel, and I also go in there and have a play around, and we work on what the next design is going to be, then he goes up and turns the lights on or off and opens and closes curtains.

“There’s been a bit of work involved but now he comes in on a Monday and runs up and down the hotel turning lights on and opening curtains and he’s got it down pat pretty well now – the first one took a little while but now he’s got it down to a fine art.

“We’ll normally know what we’re gonna do by Thursday or Friday and have a bit of a think about what the next week looks like and he’ll have it all planned, so when he gets in on a Monday he’ll normally have it done in a couple of hours.”

Creighton said he and his team had enjoyed being able to make the best of a bad situation and the feedback had been “really, really nice”.

He said he and his team “have still got a few little tricks up our sleeves that we want to play with” but he would prefer to be in a position where they would no longer be able to light up the Brisbane sky in the way they have been as social and travel restrictions ease.

“We hope that it gets busy enough that we don’t have the ability to do it. It’s nice to be able to do it but it will be nice to be busy and the rooms are all being used again.

Creighton said it was difficult to pick a favourite image but he admitted the Mother’s Day commemoration “was nice for me in a selfish way”.

“It was nice little tick for my mum and for my wife for Mother’s Day – it made me look pretty amazing,” he joked. “But the feedback we got on the candle for Anzac Day was really nice and I certainly liked the cross for health workers – it’s hard to pick one.” 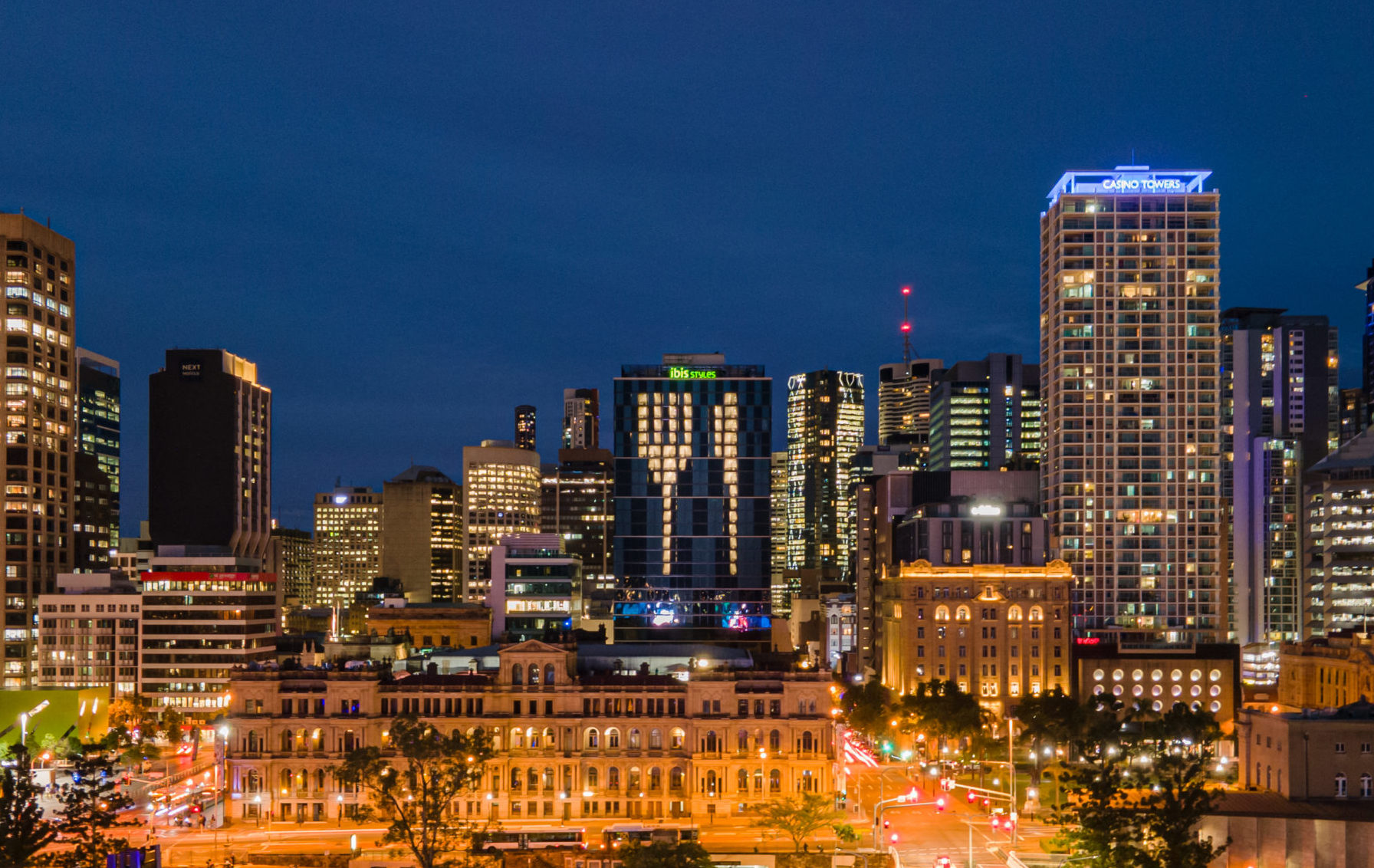 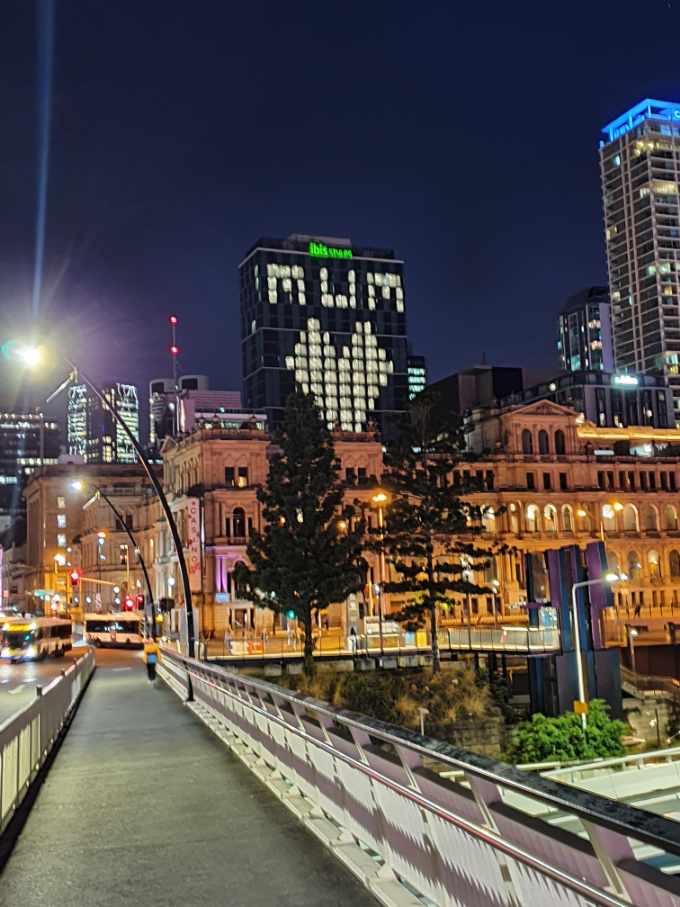 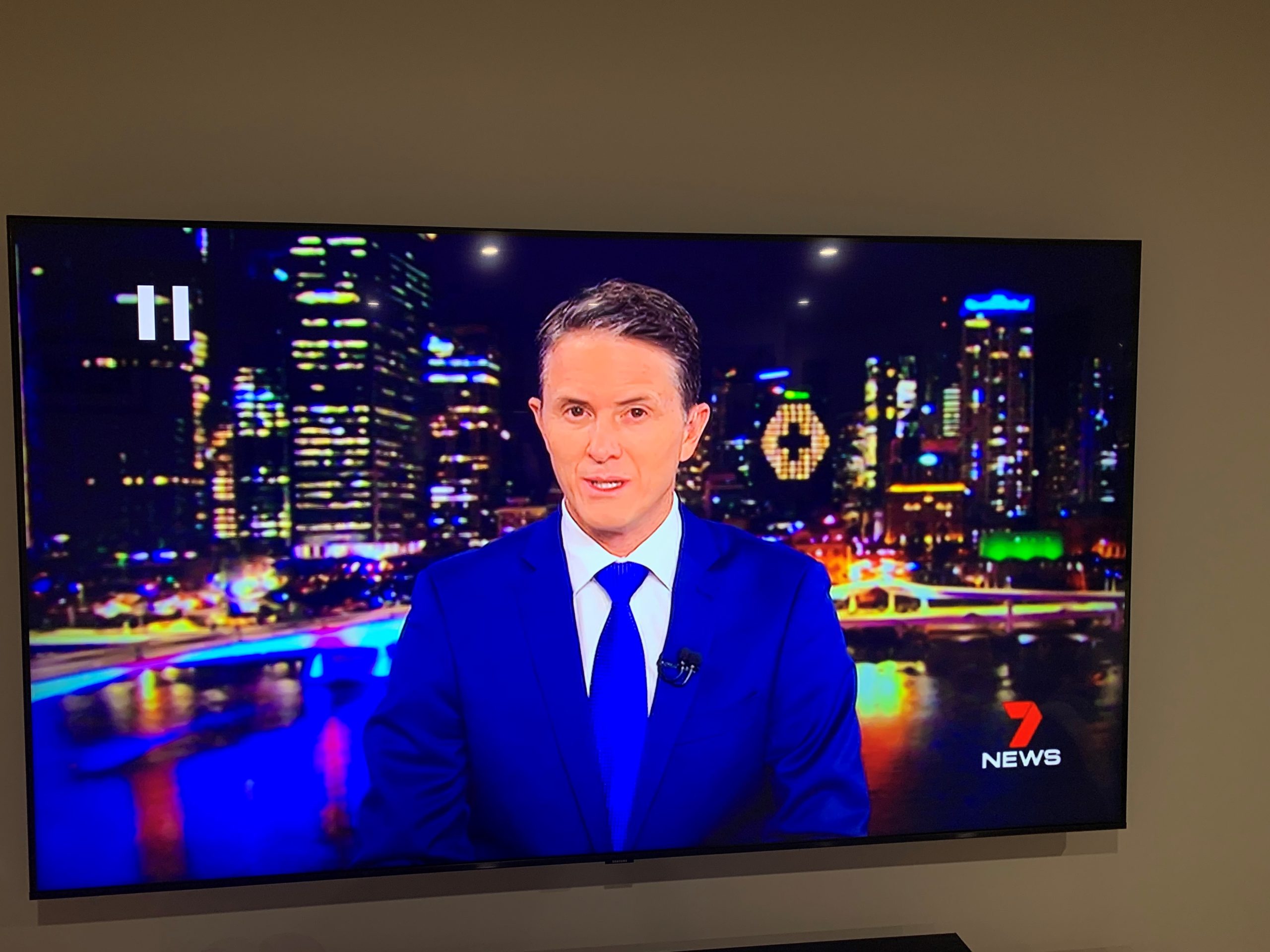 Brisbane’s Ibis Styles appearing in the background of Seven News.

Creighton said he hoped Ibis Styles’ efforts to look on the bright side would provide a beacon of hope for others in the hospitality and tourism sectors.

“Whether they stay with us or one of the hotels in Brisbane, that’s nice and it’s certainly nice to sort of put Brisbane in people’s minds and lounge rooms.

“We’re planning, we’re ready, we can’t wait to open our restaurant up to our limited guests with our COVID-safe plan in a couple of weeks once that’s all ticked off because that’s why we’re in hospitality. We love working with guests and dealing and working with the people that stay with us all the time so it’ll be nice to be able to welcome them all back in as soon as possible.

“When things do get back to normal, I think the message for us all is simple, it’s just support our local communities. Travel to places where instead of going to Bali, go to Noosa, experience Brisbane for a weekend and be a tourist in your own back yard and we absolutely can’t wait to welcome, some more local and domestic guests in our hotels.”