The soundtrack to our lives has changed over the past few months of limited social engagement. People who are spending more time at home are rediscovering tunes from their past or learning to love new music. There is a palpable sense that music is helping us get through challenging times.

In Europe, some of opera’s greatest voices have been singing from their balconies to the applause of their neighbours. Closer to home, we have classical musicians playing in their front yards, pop stars belting out their hits from their living rooms or garages, and amateur choirs creating amazing harmonies across cities, countries and continents.

Facebook has seen a deluge of posts from people challenging their friends to name 10 of their top albums. Usually it involves just posting the LP or CD cover artwork with “no explanation and no reviews”.

This exercise has opened the doors to fond memories and, despite the rules of the game, spirited debate over the relative merits of the nominated artists. It has also helped foster new musical experiences for many participants and spoken across generations. Children at home, more used to plugging in earbuds linked to their mobile phones and sharing playlists, have discovered their parents’ CD and vinyl collections and the quaint machines used to play them.

Although Eurovision 2020 was cancelled, the nations involved – including Australia – kept its spirit alive through television specials celebrating decades of music-making and musing on what might have been this year in Rotterdam.

Closer to home, the members of Powderfinger, one of Queensland’s most successful musical exports, are getting back together after 10 years for the “One Night Lonely” online gig this Saturday, May 23.

Each Friday at 8pm, the Isolate Late Show is beamed around the world from La Boite’s Roundhouse Theatre in Kelvin Grove, with hosts Naomi Price and Luke Kennedy and a changing roster of guest musicians. 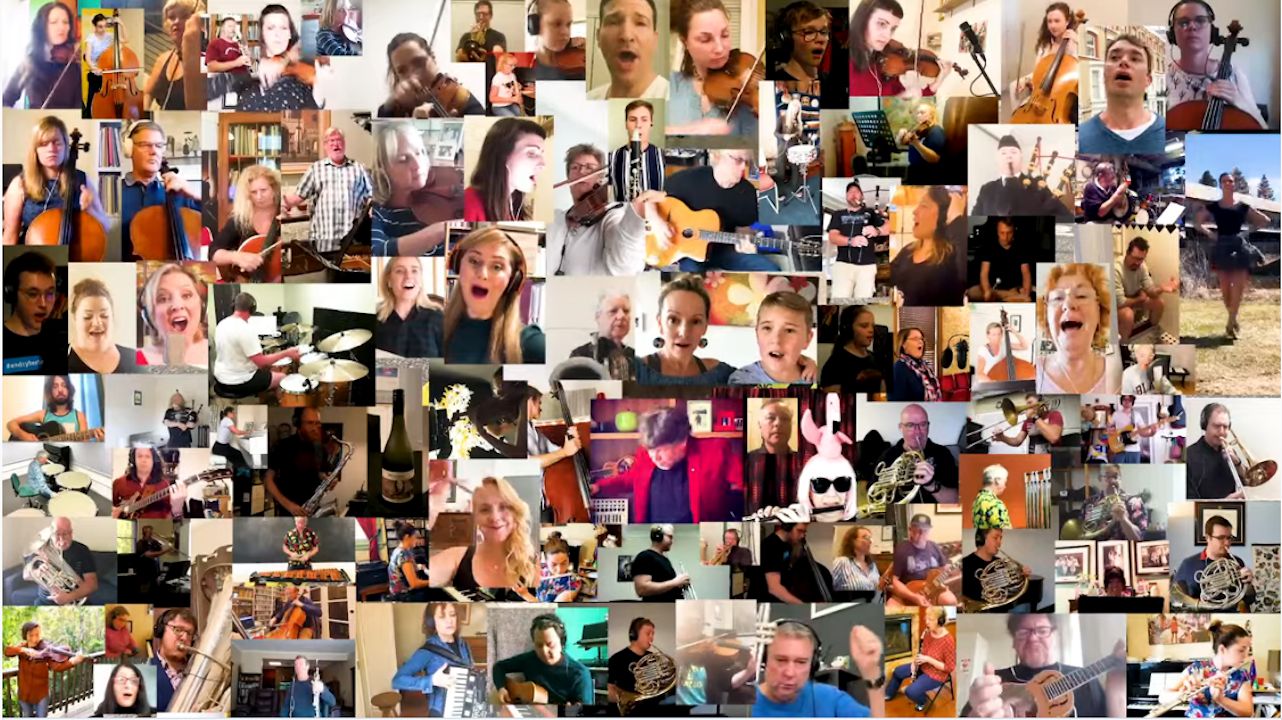 Some of the artists involved in the Coronavirus the Musical Musical project. Photo: Sean O’Boyle on YouTube

Queensland composer Sean O’Boyle, in lockdown in London, has collaborated with Amanda Jane Pritchard to write Coronavirus the Musical Musical, and recorded the overture with more than 100 musicians and singers around the globe.

The result can be viewed on YouTube. As for the fate of the musical itself, I guess we’ll have to wait until the theatres open again.

Meanwhile, ABC Brisbane breakfast announcer Loretta Ryan told a newspaper that she has set the goal of re-learning the piano in time to play at the family Christmas.

And Toowong teacher Marlene Browne is learning to play the ukulele from scratch. “Why? Because I’m 65 and I heard that it was good for your brain to learn a musical instrument,” she told InQueensland.

She joined The Cage, which is a group under the umbrella of the Brisbane Ukulele Music Society (yes, the acronym is BUMS), where she managed to have just a handful of lessons in person before the lockdown began.

However, she continues to learn and play online, through get-togethers on Zoom and learning resources on YouTube.

“The tech is really good,” she said. “Otherwise I’d be flying blind.”

Queensland Symphony Orchestra director of artistic planning Tim Matthies said the ukulele was a popular instrument among new learners, as were recorders, hand-held drums and xylophones.

“It’s been quite amazing to see how people have taken up instruments,” he told InQueensland, noting that even many orchestra members were using this opportunity to learn something new.

“A lot of people like having music in their lives [and] there are an awful lot of entry points.”

For those wanting to learn an instrument, Matthies recommended online resources including the New Zealand Symphony Orchestra’s Music Room, which introduces children to orchestral instruments and the works of great composers.

For its own part, the QSO has launched an “Over the Fence” online video series where its members play outside their homes at an appropriate social distance. Its orchestral version of the children’s favourite, Baby Shark, has become a YouTube hit.

Matthies said he expected Beethoven to garner a lot of attention this year, which is the 250th anniversary of the great composer’s birth. He said Beethoven and JS Bach were great starting points for musical appreciation because their work is so well recognised – even by people who don’t know that they know it.

If ever there was need for an Ode to Joy, the time is now.