The only underwater art museum in the southern hemisphere, the MOUA – located off the coast of Townsville in the central part of the Great Barrier Reef – is comprised of a series of installations by the world’s leading underwater sculptor, Jason deCaires Taylor, that blend art, science, culture and conservation.

MOUA board chair Paul Victory said the project was set to further cement Townsville’s reputation as the premier location to learn about the Great Barrier Reef.

“Townsville is a hub for marine science and the Museum of Underwater Art only adds to this by offering a unique and though-provoking encounter with the world’s most iconic natural wonder, while acting as a contemporary platform to share the stories of the Reef, and the culture of its First Nations people,” Victory said.

English artist deClaires Taylor told InQueensland he had been working on the project for several years.

DeClaires Taylor, who studied sculpture and ceramics at London’s Camberwell College of Art, became a fully qualified scuba instructor in 2002, and came up with the idea of combing his twin passions about 15 years ago.

“I liked the idea that if I made this underwater work it wouldn’t just be about the art, it would also be about creating the habitat and have other objectives,” he said.

“It made sense to me that you could do all these things at the same time and at the end of the day, if you didn’t like the artwork, if it wasn’t to your taste, it still had another practical purpose.

“That was how I started out and I started doing one project and I didn’t have a long-term plan that it would create a career, it was more of an exploration and experiment, and d people started to contact me.  I think I’m up to 1000 (underwater) sculptures now and I’ve done most oceans.”

A public unveiling for the MOUA was originally set to take place last week, but those plans were put on hold in the wake of the global COVID-19 pandemic.

“The 22nd [of April] was supposed to be the opening event, so it’s been very disappointing,” he said. “I was also meant to have been out previously, planting all the corals and doing all the photographs and things but at the same time, these sculptures are permanent exhibitions and they’re designed to be colonised and designed to evolve.”

One of the first MOUA sculptures is a piece called Ocean Siren, which has been installed alongside Townsville’s Strand Jetty.

Ocean Siren, a five-metre solar-powered sculpture of an Indigenous girl, changes colour with the water temperature and uses data from atmospheric weather stations on the Reef.  The piece was created in consultation with traditional owners and is modelled on local Wulgurukaba girl Takoda Johnson. 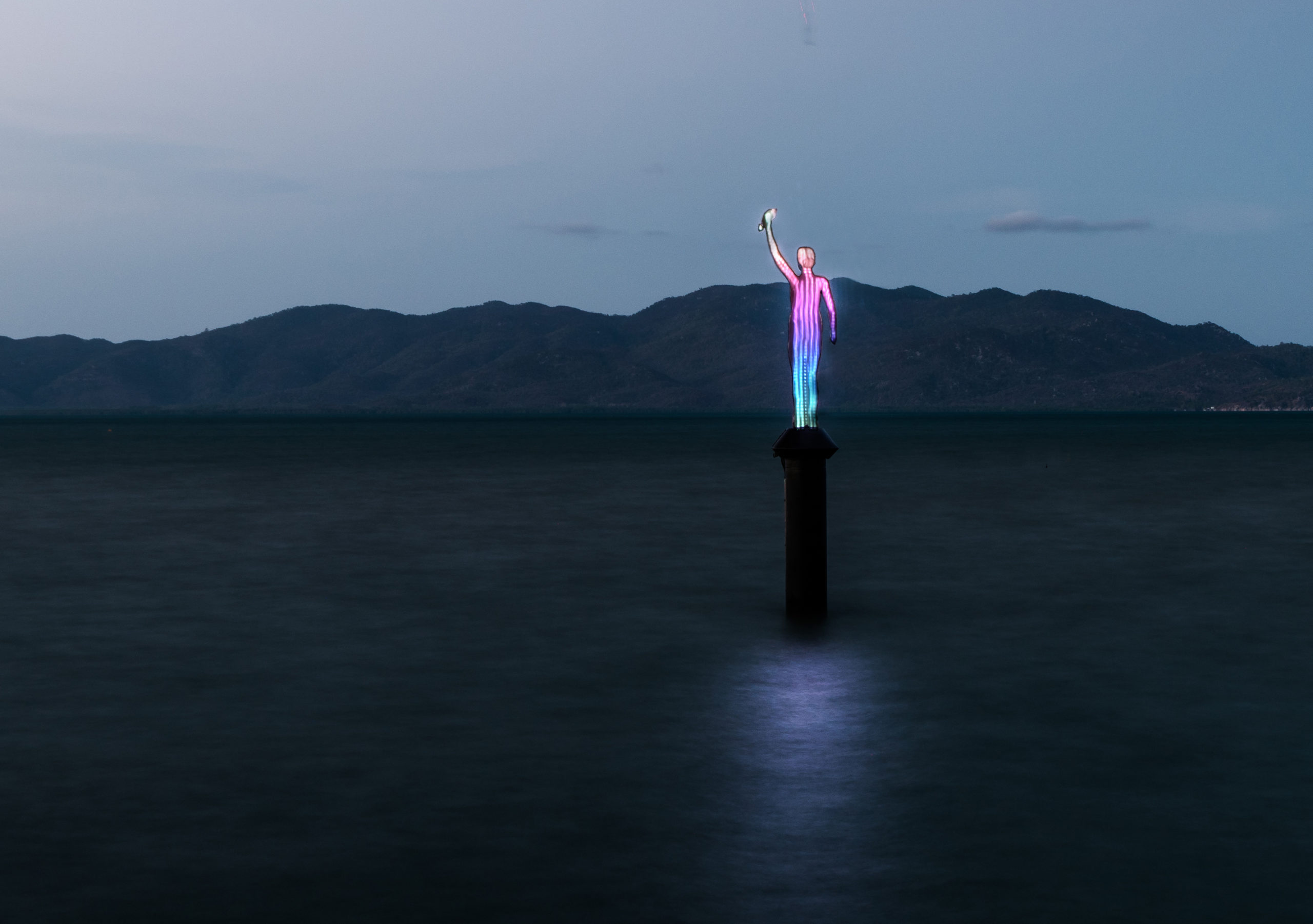 “We wanted to be able to bring live data from what’s happening out at the Great Barrier Reef into the urban environment, into a place where people will see if going for a stroll in the evening and I think we were quite settled on that concept for quite a while, it was just like what shape would it take.

“Takoda had a nice story about how she looked out on Magnetic Island where her great-grandfather used to live,” deCaires Taylor said. “She was the perfect model – she was young, a good symbol of youth and of looking towards the future and she also was enthusiastic, excited and really willing to be a participant.”

The largest installation for the MOUA is the Coral Greenhouse, at John Brewer Reef, about 80km off the coast of Townsville in the heart of the Great Barrier Reef Marine Park. Weighing more than 58 tonnes, the installation is comprised of 20 “reef guardians” who are propagating coral to help spread a message of conservation.

DeCaires Taylor, whose permanent, site-specific works span several continents and explore submerged and tidal marine environments, said the Coral Greenhouse was the largest-scale installation he had worked on to date.

“The Australian ones are the first time I’ve really done large-scale underwater architectural pieces – the greenhouse is almost 12 metres high, which I wouldn’t have dreamt of a few years ago,” he said.

DeCaires Taylor’s works are constructed using pH-neutral materials that instigate natural growth and the subsequent changes are intended to explore the aesthetics of decay, rebirth and metamorphosis.

He said the Coral Greenhouse installation complemented at John Brewer Reef’s natural environment and encompassed various depths, meaning it wo0uld be accessible to both snorkellers and scuba divers.

“Some of the work is 12 metres at the deepest part, and some of it comes up to four or five metres, so you can dive down to the bottom or you can just swim around the top and look at the whole installation in its entirety, but its designed for both snorkellers and scuba divers.

“It’s also possible to do the discover scuba, where you scuba-dive up to eight metres with an instructor, so even if you’ve never done it before you can still get down and have a look.

“The idea is we’ve put it in a place where it’s surrounded by very shallow reefs that are about a metre deep, so tourist boats can visit both the artworks and the fringing reefs.” 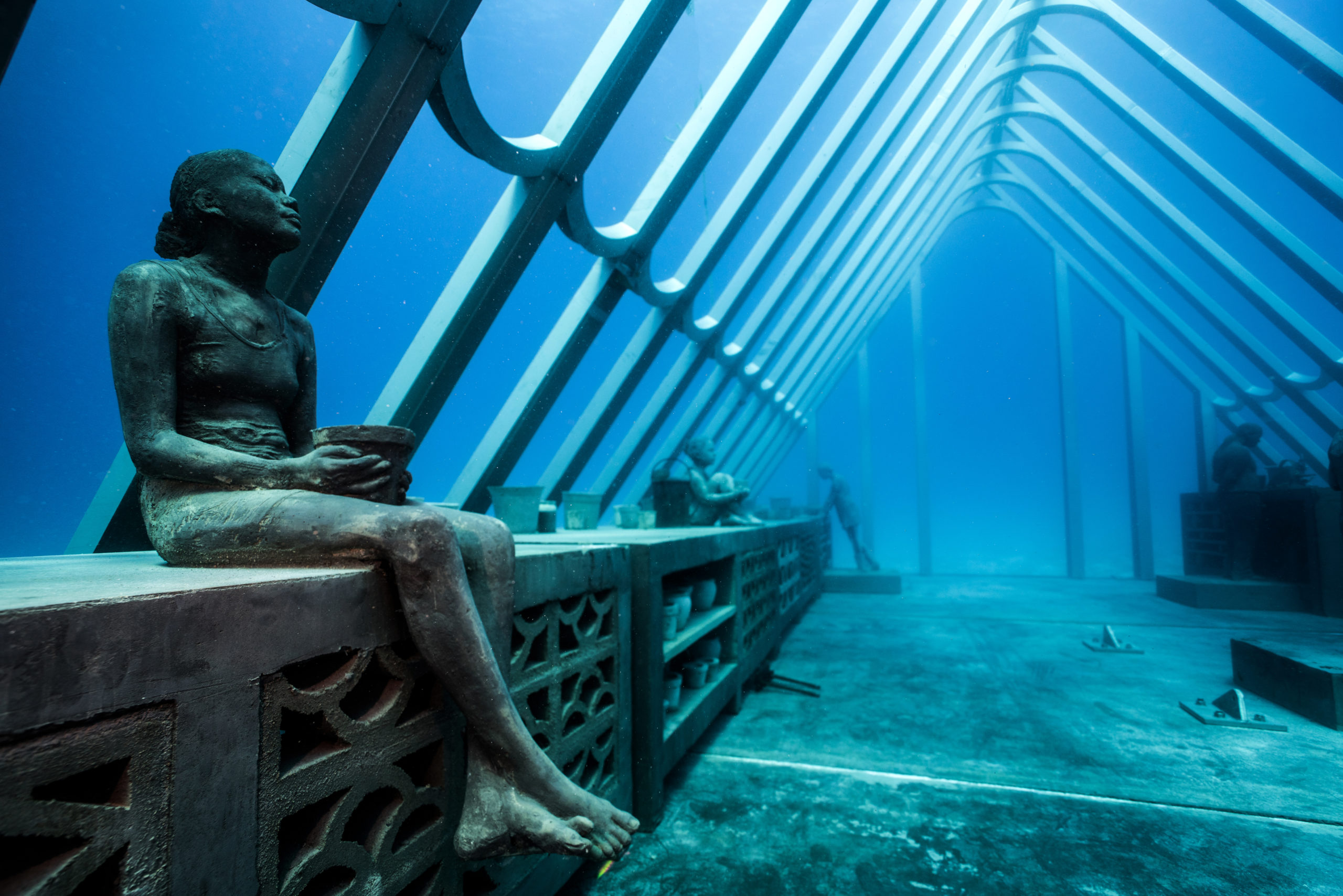 DeClaires Taylor was also in the process of designing further sculptures for sights off Magnetic Island and Palm Island before the emergence of the COVID-19 pandemic and said both projects were “still definitely planned to happen”.

“They were funded by grants and the grants, but we’ve just had the timelines extended to complete all the projects, so they’re still very much on the cards, it’s just a matter of when.

“It actually allows us a bit more time to ensure we have included all of the community in the discussions and made sure everybody is behind the project, so I don’t see the delay as too much of a negative thing, to be honest.”

Victory said given the uncertainty surrounding the time frame imposed on travel restrictions, the board made the decision last month to postpone the official launch of the John Brewer Reef Coral Greenhouse.

“The past few weeks have had a devastating toll on the tourism industry and those impacts are expected to continue to be felt into the foreseeable future,” he said.

“We need to allow operators time to deal with the immediate challenges in front of them before they can even start considering what a new tourism offering is going to look like.”