After selling its major asset, the heritage-listed, five-storey building at 109 Edward St in Brisbane’s CBD late last year, Metro Arts has found itself in a better position to weather the coronavirus crisis better than most of its contemporaries in the sector.

The sale generated a windfall of more than $10.5 million, with the proceeds being used to establish the Metro Arts Future Fund (MAFF), which will facilitate the organisation’s relocation to new offices, a theatre, gallery spaces and rehearsal studios at the West Village development in West End this year.

MAFF – which will get a kickstart from the building sale and also rely on philanthropic contributions and government funding to grow the fund – will also be used to boost the grassroots arts sector by funding artist development, the production of new work, and initiatives to foster and grow local audiences.

“We wanted to really find a way where the organisation could be sustainable, not just short term but long term,” Metro Arts creative director and chief executive Jo Thomas told InQueensland. 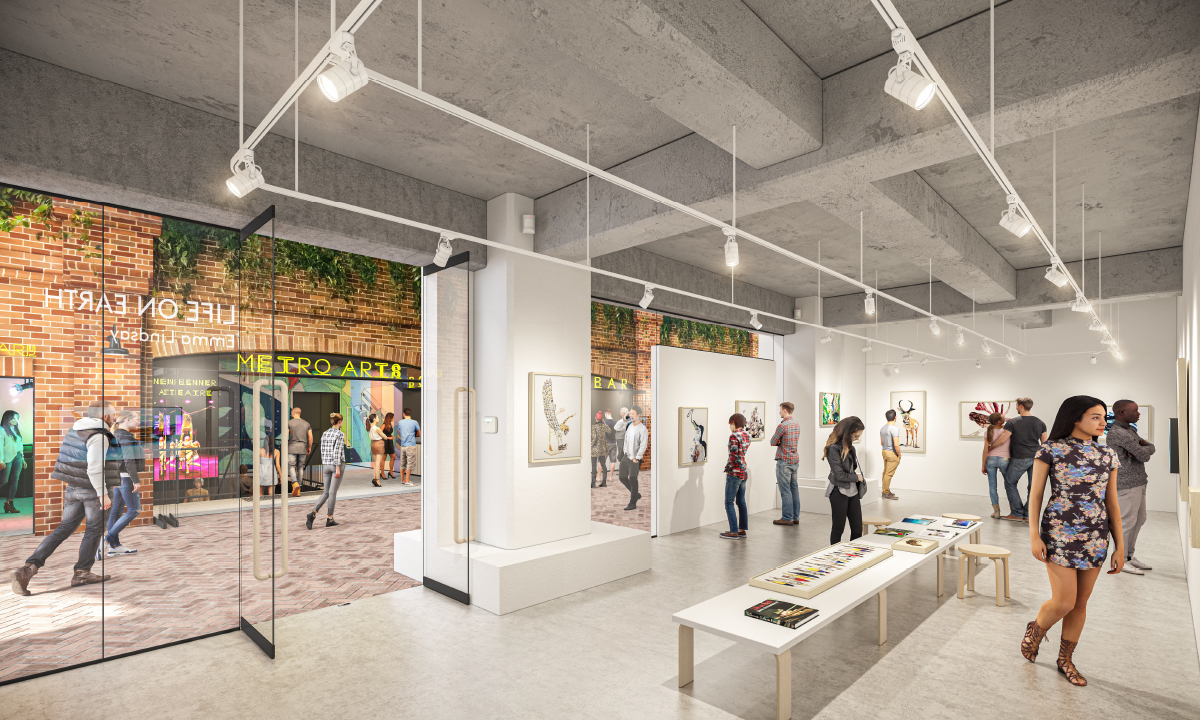 “The other issue we had was 109 Edward St was a beautiful building, really large with lots of uses for it, but it was 130 years old, and the cost of maintaining a heritage-listed building of that age is beyond the scope of an arts organisation, so we decided it was a much better use of our resources to sell that asset and set up the organisation so we actually had some cash, rather than be asset rich and cash poor.

“The main thing we wanted to do out of that sale and the proceeds from that sale was set up this fund, the Metro Arts Future Fund, and it’s very much about making sure that the artists who aren’t even born yet for art forms we don’t even know about yet, we as an organisation can be there to support them in 20 years’ time, 40 years’ time.”

Thomas said Metro Arts had been fortunate in its timing on several fronts, with most of the arts centre’s programming already in the process of being temporarily halted prior to the COVID-19 pandemic.

“Yeah, we’re very lucky because we were able to get the sale of the building through last year, and we now have the future fund, but we haven’t invested in the stock market yet, so we’ve been very lucky there.

“We had also halted most of our programming for March to September, so again, very lucky and we have also been honoured by just being awarded another four years of Australia Council funding, so, we’re feeling like we’re under a lucky star at the moment.”

Although Thomas is grateful for the relatively good fortune Metro Arts has experienced, she was quick to point out that it wasn’t all necessarily smooth sailing ahead, with many of the organisation’s philanthropic contributions and sponsorships currently under a cloud.

“We are building, as you know, over in West Village and hopefully that construction continues as long as they can, Hutchinson’s are doing a wonderful job but if construction gets halted, we won’t have a home to return to and I guess in the broader picture, we’ve lost a lot of sponsorship, which is really crucial to a small organisation.

“All arts orgs need donations and sponsorship, that’s a big part of our budget, and a lot of those really generous organisations that usually work with us and partner with us are struggling. So, there’s going to be a lot of flow-on effects, but again, we are very fortunate that we have taken these steps, when we did, and we will have this base there to protect us.”

Nevertheless, in the short term, Metro Arts has donated funds to support visual and performance artists through the Artists Benevolent Fund and the Actors Benevolent Fund and is also offering additional paid opportunities and commissions for artists to investigate and announcements to be made in the coming weeks.

“We’re trying to do what we can in the current situation, too, so the board have given me a small rescue package and we’ve made a couple of donations and we’re also just trying to think of the best way to distribute that money with some new initiatives for artists to keep them working,” Thomas said.

“I also spend a lot of my time advocating, so I wrote to a whole pile of politicians last week, and we’re just following up on that, too, just trying to make sure they don’t forget about our sole traders and our casual workers.

“As everyone’s been saying, we’re stuck at home, what’s everyone doing? They’re watching movies, they’re listening to music, they’re getting into art, they’re reading books – that’s what gets us through these hard times.”

Metro Arts – which is also celebrating its 40th birthday this year – had been planning on a launch event for its new premises in September, and while tentative plans are still in place for opening events at its new premises, Thomas said it was difficult to predict with certainty when those celebrations might occur. 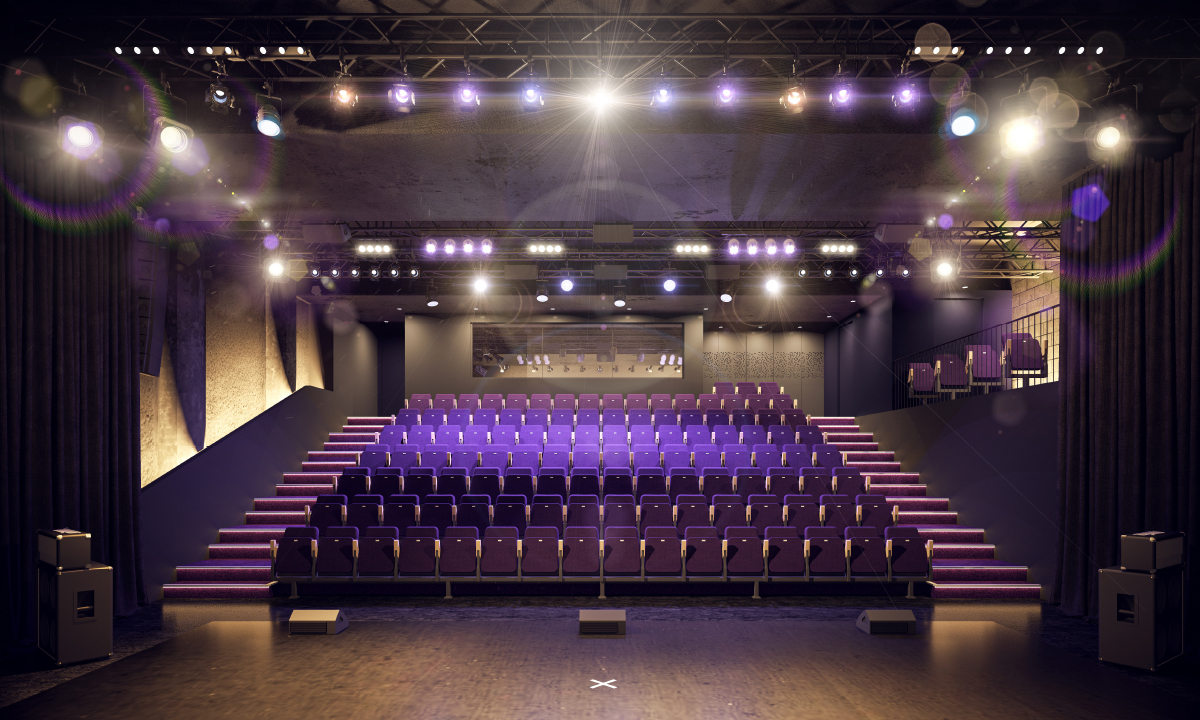 An artist’s impression of the interior of the Metro Arts theatre at West Village. (Credit: Jason Blight of Blight Rayner)

“We were due to have a very big opening of the new spaces in September and we’re just looking at that now and it’s a day by day shift,” she said. “Will we do that? Will we be able to have those all of these amazing works we’ve programmed? I don’t know yet, we’re doing the best we can to kind of shuffle some things or reimagine some programming but until we know how long [social isolation] is going to go for, what do you do?”

But Thomas said when Metro Arts was in a position to host a public opening at its new premises, it would “hopefully be the same thing”.

“It will be a big party for everyone to come along, but also a showcase of great new Australian work across disciplines, so there will be temporary art activations outside, there’ll be new theatre works, new dance works and new exhibitions in our galleries.

“We’re always about giving as many opportunities as we can for artists to make new Australian work, so that’s what we’ll showcase.

“I think arts and culture is what makes a people, and it’s what gives us our heart and our soul. We need to have a really strong government we need to have a really strong, secular society but it’s that arts and culture that help us to live, and to live well, so, if you don’t have access to that, I think that you are much poorer, as a human being.

“But for me it’s also about cultural democracy so there should be a democratisation of access to the arts, it’s making sure that everyone feels included in that.”