“Then, as you get to bigger and bigger jigsaw puzzles, there’s the challenge of actually assembling all the pieces, which gets more and more difficult.

“You wake up in the morning and wonder, ‘how many pieces will I get through today?’

“It gets your adrenaline going if you’re really into it.”

A few years ago the retired GP from Warrnambool, in southwest Victoria, finished a 33,600-piece puzzle with his son, Ben, that was one of the largest in the world. 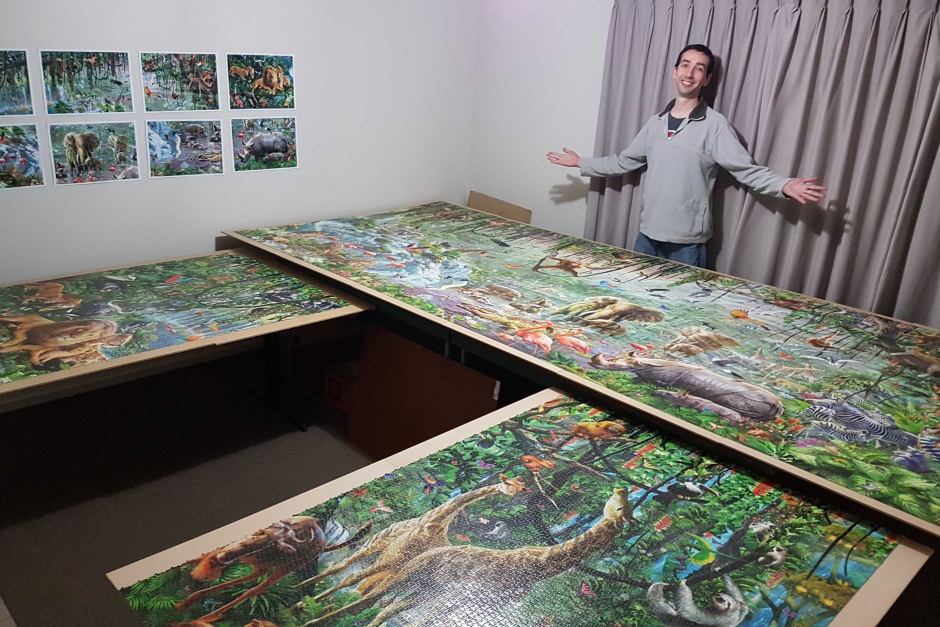 Philpot’s son Ben with the 33,600-piece jigsaw puzzle they worked on together. (Supplied: Ben Philpot)

Prime Minister Scott Morrison raised eyebrows over the weekend when he described jigsaw puzzles as an “essential” item, telling Australians it was OK to leave the house to buy them during the coronavirus pandemic.

But Philpot is not surprised jigsaw puzzles are back in the spotlight with so many people staying home.

“Why did people go back to record discs when they had CDs?

“The new technology comes along but there’s this hankering for the old stuff.

“Jigsaw puzzles will always be around and the popularity will just go up and down.”

Passion for puzzles started in the 1950s

The first jigsaw puzzle Philpot finished was one featuring Edinburgh Castle that his sister brought back from a trip to England in 1956.

“I must have done that tens of times until the pieces started going missing,” he said.

“I pretty well knew where every piece was in that puzzle.”

Since that first foray into the world of puzzles, Philpot has completed hundreds of them, most made up of thousands of pieces.

He has been working on a 9,000-piece puzzle while staying at home during the coronavirus crisis, in between sorting out his stamp collection, reading and playing chess online.

Philpot said it was the “perfect thing” to work on while stuck at home to fill in the minutes and gaps in the days.

“You can sit down for 10 minutes to do a jigsaw puzzle,” he said.

“Of course, when you get really addicted, the jigsaw puzzle becomes the thing you do most of all.”

“I think, for the most part, the customers beat the Prime Minister to it,” he said.

“We’ve been selling huge numbers of them in the last two weeks.

“People are realising they’re going to need to stay home for a while and need something to keep them busy.”

Even an 18,000-piece Sistine Chapel jigsaw puzzle, which retails for about $350 and had been sitting in the shop for two years, sold in the past fortnight.

Although the number of in-store customers had declined, Heenan said online sales had exploded.

“We’re just pushing out so many parcels every day, and they’re mostly jigsaws.”

“It’s definitely of an unprecedented time.”