The exhibition will launch at the gallery tonight – albeit with a restricted capacity and a strict adherence to social distancing – and run until Wednesday, and feature works from Kane Brunjes, Symone Male, Jim Martin, James Strickland and the gallery’s principal artist and co-founder Birrunga Wiradyuri.

“We’ve got Kane doing his first Archibald and his first Sulman, which we’re very proud of,” Wiradyuri said, “and Jim Martin, who I met through the Tall Trees exhibition last year, he has fisheye landscapes that remind me of some of Brett Whitely’s stuff and then all the other stuff that he puts in – it might be a bit busy for some people’s tastes perhaps, but it’s got a bit of Ralph Steadman going on.

“And then there’s Jamie Strickland from the Sunshine Coast is a mad bastard. If a picture dictionary with the word ‘enthusiastic’, there’d be a photo of him, he’s just unbelievable, and he’s only been painting for 12 months.”

Wiradyuri, who has entered the Archibald Prize every year since 2014, said no Indigenous artist had ever been awarded the top prize, something he believed was long overdue.

“To this day, no black artist has won the Archibald,” he said. “We’ve been the subject of winners, starting with Albert [Namatjira] down through the [David] Gulpilil to Dr G [Yunupingu] and Deborah [Mailman]. A number of us have been there, and as the subjects, but not as the artist that gets the nod.”

As part of this exhibition, the gallery will also be displaying several works from iconic Australia expressionist painter Gil Jamieson, who passed away in 1992.

“We decided we needed to continue to honour and promote Gil Jamieson and his works, so we’ve worked with the family, we went up to Monto with his son Matthew and we pulled out a series of portraits from Gil, three of which were Archibald entries, one of which was in the finals, Wiradyuri said.

“We’ve got a portrait of this character, this old girl from up Monto way that’s breathtaking, just ridiculous, and we’ve got a self-portrait of Gil that I was quite taken with and there’s also one of [late Archibald Prize winner] Sam Fullbrook. The painting of Sam is as rough as a pair of hessian underpants on a hot day but that’s Gil’s stuff and it really captures him.

“Sam’s a family friend of the Jamiesons, but it was Sam that lived up the top of the street at Buderim from me [when I was a child] and gave me my $1 prize in 1969 for a self-portrait, so for me there’s a really nice connection.”

There will only be a short window to catch this year’s exhibition, Wiragjuri said, but this was because the gallery gave participating artists as long as possible to complete their works.

“It’s very short but that’s because we try and give everybody as much time to produce the work, I’ve got to go home and finish mine today,” he said.

“It’ll be up until Wednesday at this stage, Thursday is the last day they can be collected and taken to Sydney, so it’s a very short run and we won’t be open this Saturday unfortunately, so it’s really very quick, it’s going to be three days. And if you squeak in on Thursday morning you might catch it as well.”

Wiradyuri said the gallery had already made the decision to greatly reduce its normal capacity before the Federal Government’s restrictions on indoor gatherings were announced.

“We’re going to cap numbers at far less than we would usually, around the 40 to 50 people mark,” he said. “That way we can make sure that all the measures we’re attending to with hygiene – which slows down processes – doesn’t the impact negatively impact service delivery or the experience for the punters.”

He said the gallery, which also includes a wine bar and dining, had, like many other operators in the sector, felt a massive impact since the COVID-19 pandemic.

“We’ve had a number of postponements, rather than cancellations, which means we will do the business later, but that means we run on deposits rather than full tanks, and, you know, that amount is quite significant for us, we [usually] do a lot of catering and a lot of events, so it’s not just our walk-in [business] that’s gone down.”

Wiradjuri encouraged anyone who supported the arts to do what they could to support the livelihood of artists at the moment, “because it’s gonna make a difference”.

“One of my works might sit at between eight and $24,000, for instance. If someone picks that up, that allows us to pay wages, help keep our little family together more or less about having to generate other streams of income.

“If you’re into the arts in any sort of way, in times like this, it’s really money where your mouth is because the thoughts and prayers just kind of don’t cut it, to be frank.”

If you’re in self-isolation this weekend and looking for something to keep you entertained, here are a couple of great initiatives to keep you amused and occupied.

Lock down and stay up this Friday night with Australia’s biggest little cabaret powerhouse, The Little Red Company, as they band together for an online LIVE concert event to raise money for Queensland’s creative workforce who are facing perilous loss in the wake of COVID-19.

Featuring Naomi Price, Luke Kennedy, Tom Oliver, Irena Lysiuk, Jason McGregor, Scott French and Mik Easterman, The Isolate Late Show is raising funds for those in the industry who are doing it tough.

All cash raised will be administered by the Actors’ and Entertainers’ Benevolent Fund – Queensland’s leading performing arts charity – and will go directly to a suite of actors, singers, musicians, directors, writers, designers, technicians, crew and venue staff who have been affected by this catastrophic hit to the arts.

“I started thinking about those people that in less fortunate situations and myself, that have got cancelled contracts and no real means of obtaining any further work indefinitely,” Price told InQueensland.

“Instead of kind of getting defeated by that – and obviously everybody’s incredibly despondent and devastated financially and emotionally about the whole thing – I just thought we have to be able to channel our energy into doing something about it and trying to look after those in the industry who are potentially less well off or less fortunate.

“And so combined with wanting to raise money I also wanted to explore new art forms and new mediums and new ways of connecting with people while they’re in isolation and they’re not going into public places, so the Isolate Late Show was born less than 48 hours ago.”

The IsoLate Late Show streams LIVE from 8pm tonight on Instagram (@thelittleredco) and Facebook (the little red company). Applause is optional. Latecomers are welcome. And drunk patrons will still be served. 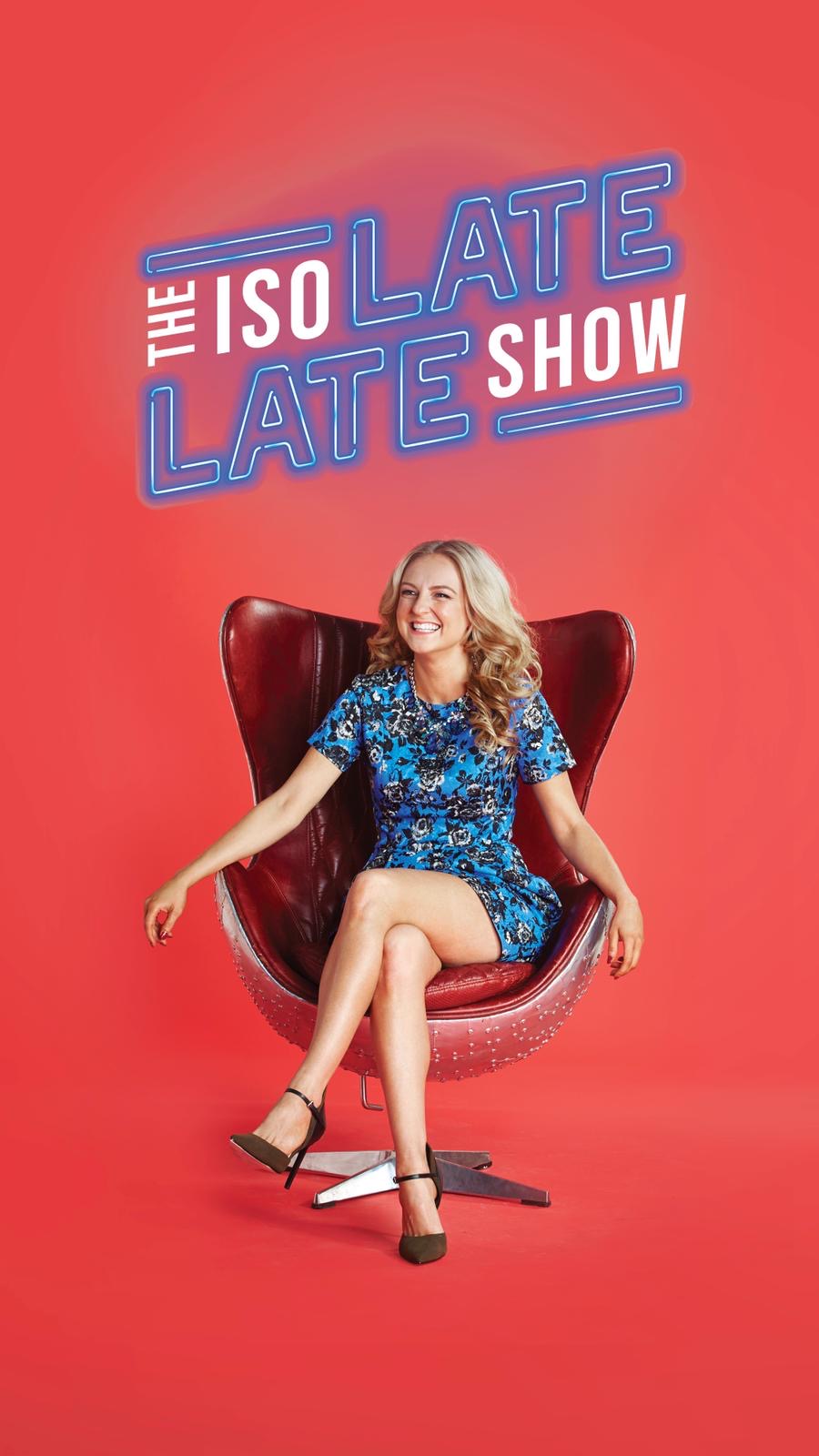 If you’re bemoaning the lack of live music taking place at the moment, check out Isol-Aid, which is taking place on Instagram from noon until midnight tomorrow and Sunday.  More than 70 Australian artists, including Angie McMahon, Stella Donnelly, Didirri, Jeremy Neale, Alice Skye, Colombus, Clea, Asha Jefferies and Julia Jacklin, will be taking part in the online event n throughout the weekend.

Artists will play a 20-minute set streamed live on their Instagram accounts, and then tag-team the next artist to play, with the event aiming to raise vital funds for music industry charity Support Act.

The event is the brainchild of Melbourne singer-songwriter Merpire and fellow musician and music festival programmer Emily Ulman.

“it was (Merpire’s) idea to begin with and she just wanted to be able to create something that would enable musicians in isolation to still be able to play,” Ulman told InQueensland. “So we just chatted about it and then we ended up just yeah just contacting as many artists as possible and next minute, we have Isol-Aid.

“I’ve worked in music for 20 years, and just the strength and resilience of the musicians and the people who work behind the scenes in the industry has always been something of great inspiration to me and the arts, in general, are just crucial, we’re such a strong, artistic country.

“What are people going to be doing in isolation? The point is that people want to listen to music and read books and look at their artwork, you know? Art is crucial, and it’s just heartbreaking that we’re the frontline of being the first to lose our incomes.