Brisbane is the only city other than New York to host a version of the World Science Festival, with the Queensland Museum having secured the Asia-Pacific rights for WSF until 2021, and this year the festival – which runs from March 25-29 and now operates as a key component of the wider Curiocity Brisbane – will deliver its most expansive and diverse program to date.

World Science Festival New York co-founder and chair Professor Brian Greene will present one of this year’s most-anticipated events, Einstein and the Quantum: Unravelling the Mysteries of Space and Time.  There will also be also several conversations and a series of events centred around the environment and sustainability, from Running the Planet Without Costing the Earth to Beyond the Emu, a panel discussion moderated by Rhianna Patrick that will discuss the potential contemporary applications of the cultural knowledge and sustainable practices brought to light in Bruce Pascoe’s Dark Emu.

That might all sound a tad cerebral, World Science Festival Brisbane executive producer Cathy James told InQueensland this year’s line-up had something for everyone, from beginners to boffins.

“The diversity is something that I’m really proud of and we really do have something for everybody,” James said. “I’m really excited about the science of cricket conversation, it’s called Howzat, and we’ve got Michael Kasprowicz coming to speak to us, along with a physicist.

“There will also be a discussion about the science of ballet called Science On Pointe – [Queensland Ballet artistic director] Li Cunxin is going to be on stage, as well as some dancers and another physicist.

“I am also excited about Dr Karl and the Night of the Nerds, James said. “Mark Humphries is going to be the emcee, and then Dr Karl [Kruszelnicki] is going to come out and give us a bit of a spiel, and then Mark is going to kind of host this sort of super-nerdy quiz show. We’ve got a really cool house band for that, which is fronted by Claire Bowditch, so that’s going to be a pretty fun night and something really unusual for World Science Festival Brisbane.”

The hatchery, which offers visitors the chance to watch loggerhead turtles hatch in incubation chambers as they meet a seawater environment, has been one of the most popular attractions of the World Science Festival Brisbane in previous years and James expects it to be as popular as ever this year.

“I guess that’s the beauty of being associated with Queensland Museum,” she said. “Patrick Cooper is the person who has actually gone up to Mon Repos and he’s got the relationships with the scientists there who monitor the hatching.

“Patrick has collected the eggs and he has the specialist skills from over 40 years in the industry, to look after those little babies and hatch them out every day, enough for everybody to see during World Science Festival. And then he releases them into Moreton Bay at the end.”

James is no stranger to being at the helm of large festivals, having worked as part of the management team for Splendour in the Grass for 17 years and serving as general manager of Falls Music and Arts Festival for five years before taking on this role for the 2020 event.

“I’ve just done lots of large public festivals, that’s my background and now I’ve come to the museum, so it’s a really big change for me but I’m loving it,” she said.

That said, James was quick to acknowledge that the curation of this year’s lineup has been a team effort, and she has been happy to defer to the experts when necessary.

“Luckily at the Science Festival, I have a lot of scientists who actually know all the sciencey stuff, so I don’t have to get too deeply into the subject matter.

“We also have a group of producers here, and science editors who have their ear to the ground all year and we also work with our [Griffith, QUT and UQ] university partners, who obviously have experts in all of their fields. So, we’re able to draw on experts from all around Australia, really, and in all different fields, in order to put together the really best bits of science.”

This year’s WSF Brisbane will also include an area called The Nucleus, which will include a licensed bar and a variety of free events, including conversations and a live music program featuring the likes of Jeremy Neale, Moreton, Meagan Cooper and Harley Marsten. 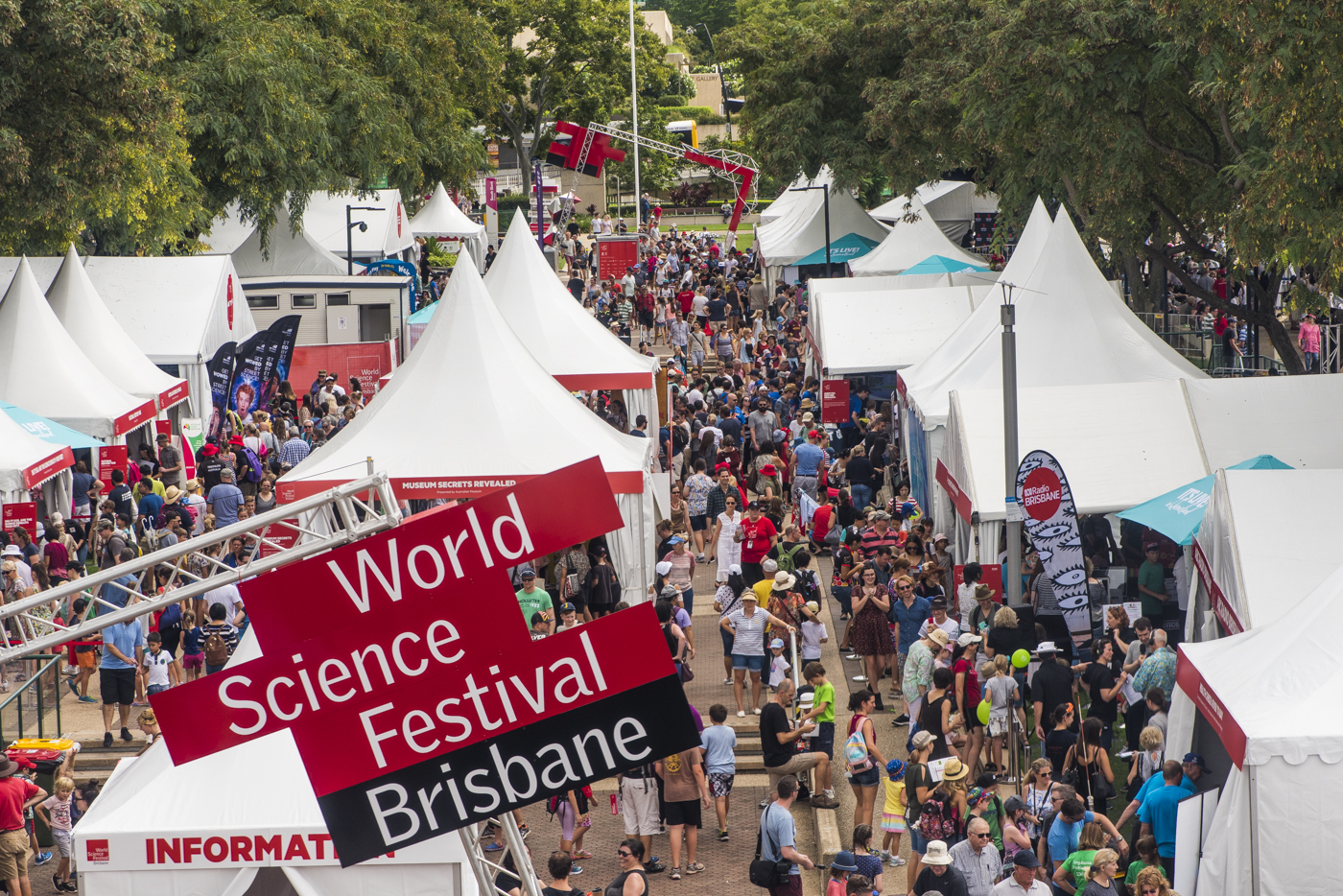 “It’s gonna be a fun place to hang out and it’s just sort of easy accessible noisy science for grown-ups, basically, and you can have a drink while you’re doing it – it’ll make you feel smart,” James said.

“We just wanted to give opportunities for young up-and-coming artists and they don’t necessarily have any particular connection with science. They’re just good artists and we want the venue to be a fun venue for people to come along.”

Events aimed at children remain one of the most important priorities for the festival, and James said this year’s schools program had proven to be particularly popular.

“The schools program has pretty much sold out straight away,” she said.  “It’s a very strong part of our programming, wanting to talk to the future scientists, and I think that schools can understand that bringing [students] to World Science Festival Brisbane is an awesome opportunity to address lots of different kids in lots of different ways we’ve got such a diverse program of sessions. Things like cool careers and cool jobs where scientists with interesting jobs will talk to kids and go, guess what I do.

“It’s wild and interesting and, and hopefully will kind of inspire some future little scientist, but we also have lots of fun things for them to do inside the museum, and of course the hatchery, you can’t do World Science festival without hatchery.”