That’s where events such as the Brisbane Comedy Festival and the Sit Down Comedy Fringe, both starting this week, come in.

Exactly who first dubbed comedy “the new rock ’n’ roll” is a matter of dispute, but it was originally a reference to the emergence of “stadium stand-ups” – comedians with such large followings that they could fill venues previously restricted to chart-topping bands.

It also refers to the phenomenon of smaller acts playing on the same bill or at a handful of nearby venues over a short period of time, in a festival format. The hope for aspiring performers is that people who go to see the headliners will also sample some of the lesser-known acts.

Over the next few weeks, Queensland audiences will have the chance to see some big names – from Aussie favourites Dave Hughes, Jimeoin, Cal Wilson and Mel Buttle to Britain’s Jonathan Pie, Stephen K Amos and James Veitch – plus some up-and-comers who may just be the next big thing.

What those audiences may not appreciate is the blood, sweat and tears that go into a festival performance – or the financial risk that smaller artists take in putting on a show.

Mike van Acker, who’s been on the stand-up circuit for 25 years, has written a new show for the Fringe about something that is very personal and still quite raw: how he was fired from his dream job of co-hosting a Brisbane breakfast radio program.

But he insists that his show, Sacked, won’t be an act of vengeance against 97.3FM, which dumped him and co-host Bianca Dye late last year to allow for the return of former hosts Robin Bailey and Terry Hansen.

“I don’t want to attack anybody, but at the same time there will be a little bit in the show about the way radio runs that, while not secret, may be surprising,” he says.

It won’t shy away from the manner of his departure, or what he discovered when he read the small print in his contract. 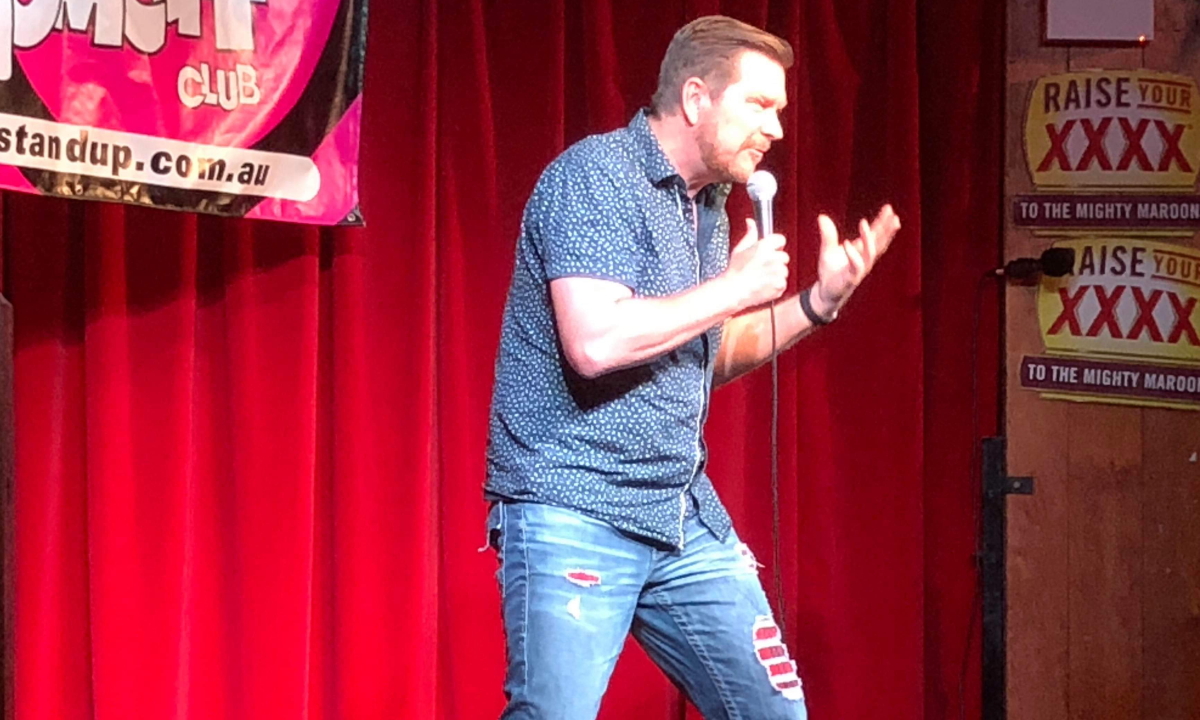 Mike Van Acker, on stage at the Paddington Tavern, will be sharing his recent life experience in a new show at the Fringe.

Van Acker says the festival format allows him to tell a true story with heart and humour rather than just deliver a series of quickfire jokes.

Natalie Bochenski from Brisbane’s Act/React theatre company is no stranger to the festival circuit. She has performed around Australia and, with Amy Currie, presented Love/Hate Actually at the Edinburgh Fringe, the world’s most famous comedy festival.

As producer and performer, she has a very hands-on role, which includes putting up her own money for venue, travel and other costs.

At the Comedy Festival, the company will perform a favourite from its growing repertoire, Speed The Movie, The Play! Like Love/Hate, it’s a riff on a popular film – in this case, the 1994 action flick starring Sandra Bullock and Keanu Reeves. And it’s set on an actual bus – on loan from the Queensland Omnibus and Coach Society – set up on the lawn at the Brisbane Powerhouse.

“Each bus only seats 40 passengers, and it’s a unique experience every time,” she says. “The aim of the show is to be like a roller-coaster – so fun that you’ll yell ‘I want to do that again!’ when it’s all over.”

Bochenski, who has recently played Perth’s Fringeworld and the Adelaide Fringe, is a young veteran of the festival circuit.

“Edinburgh Fringe, of course, is the behemoth of them all. It’s an exhausting marathon – but it’s addictive, and I’d love to go back,” she says.

“Each festival is a different beast; each has its own quirks and challenges. I’ve been actively doing festivals for three years now, and I continue to learn from each one. When I invent the sure-fire way of selling out shows, I will be rich!”

And if she does find that magic formula, hundreds of wannabes will be lining up to learn what it is.