Greensills’ Australian parent probably became insolvent on March 2 this year and one of its biggest secured creditors was the Peter Greensill Family Trust, according to a liquidators report from Grant Thornton.

The debt to PGFT was $78 million and related to a loan to the company. The trust is a secured creditor which gives it priority in any repayment, which seems unlikely. Peter Greensill is the brother of Lex, who founded and led the company.

A report from liquidators Grant Thornton pinpoints the time of insolvency of the Australian company as being a week before it filed for administration.

“The facility was entered into for the amount of$US60 million ($A78 million) and was guaranteed by Greensill Capital UK. Similar to the Credit Suisse facility, the facility agreement stipulated the funds were to be on-lent to GCUK, and that interest was to accrue at rates marginally higher (i.e. 0.35% higher than that charged by Credit Suisse).

“Our review of the general ledger confirms that interest accrued, however we have not identified any payments made to PGFT in respect of the loan during the review period.’’

The collapse of Greensill’s global business, which started from humble beginnings in Queensland, has left billions owing creditors and the liquidators confirmed Greensill’s problems were brought to a head by the loss of insurance. German banks are claiming as much as $2.95 billion, but are considered unsecured creditors and highly unlikely to get any return.

A report into the solvency of the British operating company has yet to be determined.

“Without insurance and the related financial support, the GCUK business model was no longer viable and this in turn impacted the company’s ability to access ongoing funding as required from GCUK.’’

Greensills was involved in supply chain finance. It paid invoices for companies and collected the debt. The business model was dependent on insurance to cover that exposure.

“In addition, we note that the (Australian) company was heavily reliant on working capital funding from Greensill Capital UK in order to meet its ongoing obligations. Upon GCUK being unable to renew its trade credit insurance arrangements, and ceasing to originate assets (i.e. receivables) from 2 March 2021, financial support to GCUK was withdrawn,’’ the liquidators said.

“As the holding company of the Greensill Group, the company raised both debt and equity on behalf of the trading entities, with the majority of the funds sourced having been advanced to GCUK, resulting in an intercompany loan receivable of$US777.4m at the date of our appointment.’’ 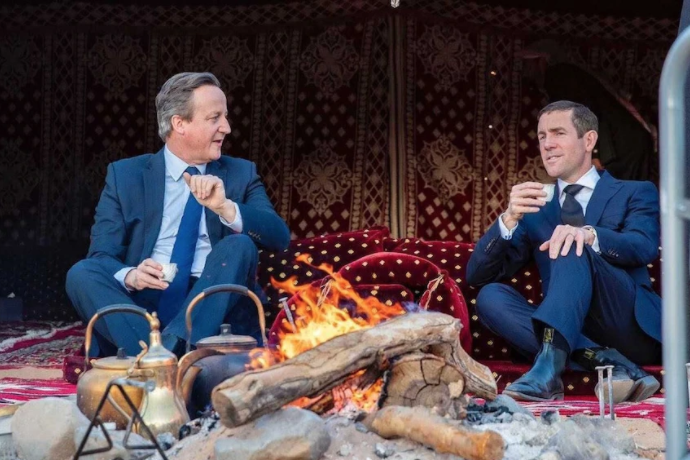 Former prime minister David Cameron went on to become an employee of Greensill Capital after he left office.(photo: ABC)

The liquidators said it was is apparent that the company’s primary means of meeting its current and future obligations, was reliant on the loan $US777.4m being recoverable from GCUK and GCUK continuing to provide working capital funding to the company on an as needed basis, with those advances being offset against the loan.

A separate report from the British Government said Lex Greensill enjoyed an “extraordinarily privileged” relationship with government and former British prime minister David Cameron “could have been clearer” about his relationship with the financier’s firm, a review has found.

The long-awaited report about Greensill Capital, the collapsed financial company that Cameron lobbied ministers for, said “it is clear from the evidence that I have reviewed that Mr Greensill had a privileged – and sometimes extraordinarily privileged – relationship with government.”

The report said Cameron, the former Conservative Party leader, “did not breach the current lobbying rules and his actions were not unlawful”.

But the report added that “Mr Cameron could have been clearer about his relationship with Greensill Capital” in his communications with the Treasury, the Bank of England and officials.

Cameron said that Greensill Capital was paying him “a good amount of money every year” and he had equity and participated in a discretionary uncapped bonus scheme.